NYPD Has Paid Over $400 Million In Settlements

In response to the points brought up post-publication, we wanted to clarify two things:

Any other observations, please let us know! 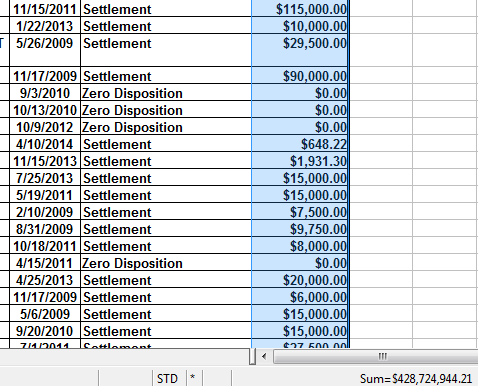 We’ve only just begun to look through the data, but already there’s a couple interesting take-aways: one, the sheervolume of capital that is being spent on settlements, and two, that the overwhelming majority of these cases end with the NYPD at fault. While’s there a handful of Zero Disposition and Administrative Closing statuses, the Settlement category outnumbers them three to one.

We encourage readers to take a look at the data and see what they can find. For example, here’s the ten largest payoffs, totaling 35 million:

You can find the spreadsheet on the request page, or download it directly here.

Thanks again to Todd Feathers for the request, and as always, let us know what you find at info@muckrock.com.