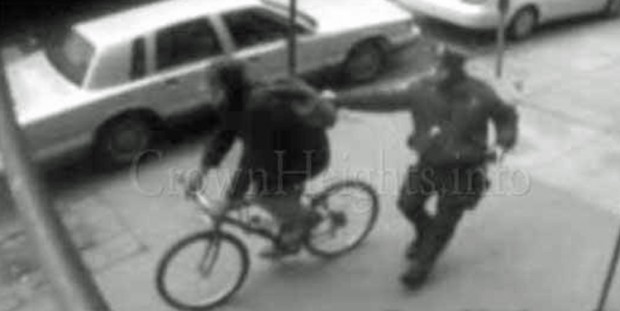 Some call it “stop-and-frisk by another name.” Others say it’s an excuse for cops to up the number of outstanding arrest warrants.

But the facts in a recent CUNY Law School study show that from 2008 to 2011, the New York City Police Department issued more tickets in minority than in other neighborhoods to cyclists who rode their bikes on the sidewalk. Of the 15 neighborhoods with the greatest number of summonses for the crime of bicycling on the sidewalk, 12 consist mainly of blacks and Latinos.

The research was coordinated by City University of New York sociology professor Harry Levine and members of his Marijuana Arrest Research Project, a program that keeps track of victimless crimes in large U.S. cities, and NYC in particular.

The neighborhood with the highest number of bicycle-on-sidewalk summonses was Bedford-Stuyvesant (West) in Brooklyn, which averaged 2,050 per year. The area’s population numbers about 90,000 and is 79 percent black and Latino.

The ordinance officially known as “Prohibition of bicycle operation on sidewalk” is described in Section 19-176 of the New York City Administrative Code:
“No person shall ride a bicycle upon any sidewalk unless permitted by an official sign. A person who violates this subdivision may be issued a notice of violation and shall be liable for a civil penalty of not more than one hundred dollars….”

The law allows for a higher fine and/or up to 20 days in jail if the violator “endangers any other person or property.”

Levine’s study certainly raises questions. Such as: Could it be that residents of minority neighborhoods take to the sidewalks because their streets lack bike lanes?

“There are more sidewalk stops in the same neighborhoods where there are more stop-and-frisks,” Stephan tells the Voice. “Institutionally the practice is even more nefarious, because people in these neighborhoods are starved of a resource [bike lanes] and then penalized for turning to the next logical option available. It’s like the city failing to give a neighborhood a park and then criminally charging children for playing in the street.”

A ticket for biking on the sidewalk can easily evolve from a traffic violation to a more serious crime if the accused fails to respond to the summons.

“What might seem like a matter of petty over-policing in neighborhoods of color is actually giving thousands of people of color a criminal record,” Stephan says.

Levine sees additional dynamics at play. Officers, he says, may be looking to satisfy quotas on arrests and summonses.

A summons requires a defendant to appear in court on a specific date to contest or pay his or her fine. If the accused misses the court date, an arrest warrant is issued, typically unbeknownst to its target.

In some cases, an infraction for riding one’s bike on the sidewalk can lead to immediate arrest, if the accused already has an outstanding warrant. That, in turn, may translate to a night in jail.

“The problem is less the [lack of] bike lanes than the police patterns of enforcing the law,” says Levine, calling the phenomenon “a nightmarish underground piece of the criminal-justice system.”

Prior to 2013, more than 500,000 summonses were issued in the city each year. Last year that number slipped to 450,000 or so, and bike-on-sidewalk dropped to fourth place on the list. It still tops 16 other offenses, including reckless driving and unlawful possession of marijuana.

Speaking of pot, Levine says he stumbled on the bicycle-on-sidewalk data as a byproduct of trying to understand his major obsession since 2005: the epidemic of marijuana possession arrests.

Though he was intrigued, it wasn’t until the furor over stop-and-frisk arose and then subsided that anyone paid much attention to the numbers.

“People care now because they have been educated,” Levine says. “Stop-and-frisk appeared to drop significantly in the last year of Mayor Bloomberg,” and so now “seemed like a good time to bring up the bicycle data.”

Levine released the results of his study, along with information on marijuana arrests, on October 20.

Asked to comment on the proportion of bike lanes in minority neighborhoods, the New York City Department of Transportation informed the Voice via email that by December 31 it will have added “58 miles of bike lanes” citywide this year.

“DOT always works closely with the local community boards to discuss where bike infrastructure is most needed for safe commuting,” reads the department’s email. “This year, we have already installed bike lanes in Brownsville, Washington Heights, East Harlem, and other areas. We will continue to work with the local communities in the coming years to expand the bike connectivity.”

Here is the full text of the CUNY study. Information regarding bicycle-on-sidewalk summonses starts on page 5:

In August the NYPD cracked down on cyclists as part of its Operation Safe Cycle. At the time, officers who had been dispatched to combat “hazardous violations” that endangered cyclists and pedestrians were documented breaking the law themselves.