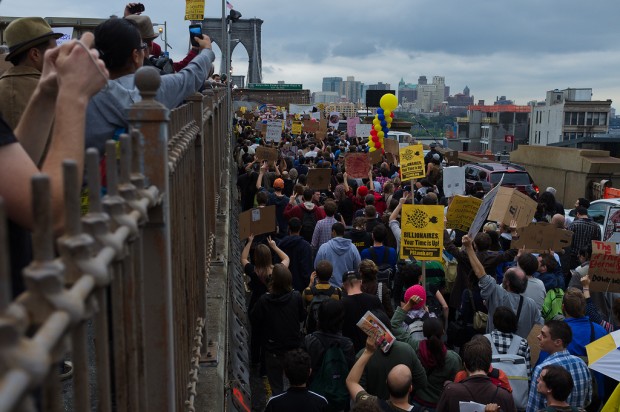 Above: October 1, 2011 day 14 of Occupy Wall Street. Approximately 2000 people marched to the Brooklyn Bridge. The majority of them attempted to cross it via the eastbound roadway, rather than the pedestrian crossing. Photo by Mat McDermott.

Mayor De Blasio goes back on his word

Eric Garner protests and other free speech activities in jeopardy

The Partnership for Civil Justice reports that U.S. Court of Appeals for Second Circuit just granted the City of New York an in banc hearing, where City attorneys will try once again to overturn a significant victory upholding fundamental First Amendment rights for protesters.

The De Blasio administration is asking the federal Circuit Court for the authority to engage in the mass arrest of protesters when they take to the streets peacefully, just as they have been doing recently against police brutality. This request for the legal authority to engage in wholesale mass sweeps of demonstrators would allow the police to do so without any notice or warning to them that they are even allegedly in violation of any law. In the Occupy Wall Street case at issue the NYPD trapped and mass arrested 700 people after police commanders led and escorted them onto the Brooklyn Bridge.

“This is the most significant and most defining legal case on protesters’ rights in the last 40 years, since the mass arrests of May Day 1970,” said Carl Messineo, PCJF Legal Director. “Mayor De Blasio seeks the authority to arrest today’s protesters in the same manner Mayor Bloomberg falsely arrested Occupy Wall Street protesters by the hundreds.”

“The City of New York has waged a major legal battle and expended enormous resources in this fight against the constitutional rights of Occupy Wall Street protesters who were illegally arrested on the Brooklyn Bridge in October 2011,” said PCJF Executive Director Mara Verheyden-Hilliard. “This case was not just about vindicating the rights of those who were arrested, but ensuring that people can demonstrate peacefully without suddenly being arrested and taken to jail.”

The PCJF argued in front of the Court of Appeals that the U.S. District Court’s initial ruling, by Judge Jed Rakoff, was proper, and given the video evidence, it is clear that high-ranking police officials led and escorted the marchers across the roadway of the bridge and, having done so, could not lawfully conduct the arrest without giving notice or warning to the protesters. The Second Circuit initially upheld this ruling on Aug. 21, 2014.

Before he was elected Mayor, acting as the city’s Public Advocate, Bill De Blasio called Occupy Wall Street a “heartfelt movement that’s speaking to what people are feeling all over this country.” Instead of supporting Michael Bloomberg’s crackdown on that movement, De Blasio called for the City to “make clear that we’re gonna respect their First Amendment rights and let this play out.”

Now as mayor, De Blasio has gone back on his word. He had an opportunity to reverse the damaging legacy of his predecessor, but has instead adopted and defended Mayor Bloomberg’s and Commissioner Kelly’s position.

For more on this case see: Partnership for Civil Justice Fund on the Brooklyn Bridge Litigation