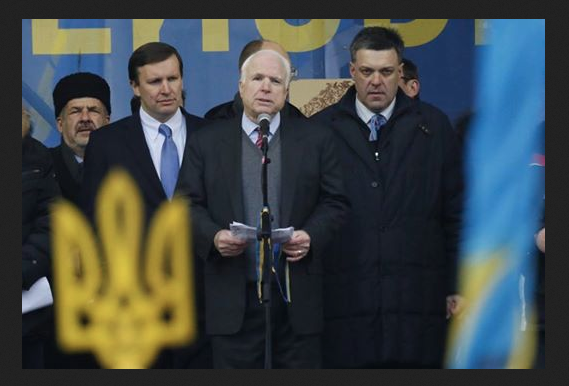 Sen. John McCain appearing with Ukrainian rightists at a pre-coup rally in Kiev.

Exclusive: The mainstream U.S. media continues to sell the American people a one-sided storyline on the Ukraine crisis as the Kiev regime celebrates a key military victory at Slovyansk, an eastern city at the center of ethnic Russian resistance to last February’s violent coup that ousted elected President Yanukovych, writes Robert Parry.

As you read or watch the mainstream U.S. media’s accounts of the Ukrainian government’s military offensive against ethnic Russians in East Ukraine, it’s worth remembering that these MSM outlets have been feeding Americans a highly biased narrative of the crisis non-stop from the beginning.

For instance, New York Times correspondent David M. Herszenhorn included in a largely celebratory account of the Ukrainian blitzkrieg that overwhelmed ethnic Russian positions in the town of Slovyansk on Saturday this summary of the conflict’s background:

“The separatist rebellion is the latest, bloodiest chapter in a crisis that began in November after Viktor F. Yanukovych, then Ukraine’s president, rejected a trade accord he had promised to sign with the European Union in favor of closer ties with Russia. Protesters took to the streets of Kiev, eventually driving Mr. Yanukovych from office. Within a week, Russia invaded Crimea, then annexed the peninsula.”

Herszenhorn, like nearly all his MSM colleagues, simply can’t find it within himself to display the journalistic integrity needed to present an evenhanded and unbiased explication of how this crisis unfolded. Instead, it’s all about blaming Ukraine’s elected President Yanukovych and Russian President Vladimir Putin for everything.

Always absent is the fact that the EU’s trade accord came with a draconian International Monetary Fund austerity plan attached, a prescription to inflict even more pain on the people of Ukraine who have suffered under a post-Soviet economic system dominated by a handful of corrupt oligarchs. The IMF plan would have simply hit the average Ukrainian even harder — with elimination of heating subsidies and devaluation of their currency – while the Ukrainian oligarchs and their Western financial backers would have escaped the pain, as usual. In rejecting the IMF scheme, Yanukovych opted for a more generous $15 billion loan deal from Moscow.

Blind to the Neo-Nazis

Herszenhorn’s narrative also excludes the key role of neo-Nazi militias that were organized in 100-man units to serve as the tip of the spear in the Feb. 22 coup that drove Yanukovych and his government from power. In recognition of their key role in the coup, the neo-Nazis were awarded several ministries in the new government, including the office of national security.

Then, there is the cherished MSM tale of the Russian “invasion” of Crimea, which – unlike every other “invasion” in history – did not involve military forces crossing an international border. Russian troops were already stationed in Crimea under an agreement with Ukraine’s government. And, the impetus for Crimea’s secession from Ukraine and rejoining Russia came from the local government and the Crimean people, not from Russian military force. But repetition of the words “invasion” and “annexation” is needed to elicit the desired revulsion from the American people.

All in all, the Ukraine case has been a curious example of U.S.–backed “democracy promotion” – overthrowing a democratically elected leader so a coup regime could impose a “very unpopular” austerity plan on an already suffering population. [For details, see Consortiumnews.com’s “Ukrainians Get IMF’s Bitter Medicine.”]

The Times’ Herszenhorn has been among the most biased of a long list of biased MSM correspondents who have enforced the false narrative about Ukraine. Indeed, the oppressive “group think” – blending State Department propaganda with its amen chorus of the MSM – has made formulating any rational policy toward Russia and Ukraine politically impossible in Official Washington.

It seems that the safe career play is always to go for the most extreme examples of Russian perfidy. For instance, in mid-April, the Times published a front-page story by Herszenhorn excoriating Russian Prime Minister Dmitri Medvedev for engaging in clumsy propaganda.

In the article entitled “Russia Is Quick To Bend Truth About Ukraine,” Herszenhorn mocked Medvedev for making a Facebook posting that “was bleak and full of dread,” including noting that “blood has been spilled in Ukraine again” and adding that “the threat of civil war looms.”

The Times article continued, “He [Medvedev] pleaded with Ukrainians to decide their own future ‘without usurpers, nationalists and bandits, without tanks or armored vehicles – and without secret visits by the C.I.A. director.’ And so began another day of bluster and hyperbole, of the misinformation, exaggerations, conspiracy theories, overheated rhetoric and, occasionally, outright lies about the political crisis in Ukraine that have emanated from the highest echelons of the Kremlin and reverberated on state-controlled Russian television, hour after hour, day after day, week after week.”

This argumentative “news” story spilled from the front page to the top half of an inside page, but Herszenhorn never managed to mention that there was nothing false in what Medvedev wrote. Indeed, as the bloodshed has grown worse and a civil war has become obvious, you might say Medvedev was tragically prescient.

It was also the much-maligned Russian press that first reported the secret visit of CIA Director John Brennan to Kiev. Though the White House later confirmed that report, Herszenhorn cited Medvedev’s reference to it in the context of “misinformation” and “conspiracy theories.” Nowhere in the long article did the Times inform its readers that, yes, the CIA director did make a secret visit to Ukraine.

Now, as the Kiev regime celebrates its bloody conquest of the eastern Ukrainian city of Slovyansk, it might be advisable for Americans who don’t want to continue being deceived by U.S. government/media propaganda to recognize – and reject – these one-sided and false narratives. [For more details, see Consortiumnews.com’s “Ukraine, Though the US ‘Looking Glass’” or The Nation’s “The Silence of America’s Hawks About Kiev’s Atrocities.”]