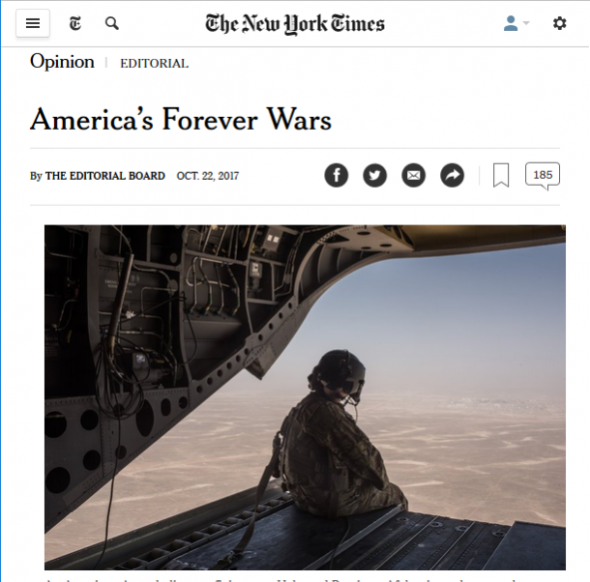 In considering why “the public is quiet” about the United States’ unending wars, the New York Times (10/23/17) fails to examine the failure of leading media outlets to actually oppose these wars.

Corporate media have a long history of lamenting wars they themselves helped sell the American public, but it’s rare so many wars and so much hypocrisy are distilled into one editorial. On Monday, the New York Times (10/22/17) lamented the expansion of America’s “forever wars” overseas, without once noting that every war mentioned is one the editorial board has itself endorsed, while failing to oppose any of the “engagements” touched on in the editorial.

The Times began by noting the sheer scope of US military reach:

The United States has been at war continuously since the attacks of 9/11 and now has just over 240,000 active-duty and reserve troops in at least 172 countries and territories…. American forces are actively engaged not only in the conflicts in Afghanistan, Iraq, Syria and Yemen that have dominated the news, but also in Niger and Somalia, both recently the scene of deadly attacks, as well as Jordan, Thailand and elsewhere. An additional 37,813 troops serve on presumably secret assignment in places listed simply as “unknown.” The Pentagon provided no further explanation.

The editorial stops short of actually opposing anything specific, instead insisting, “It’s time to take stock of how broadly American forces are already committed to far-flung regions and to begin thinking hard about how much of that investment is necessary.” They are vaguely concerned; here we have this massive global empire, fighting an ever-changing nebulous enemy of “terrorism,” with no end in sight. What can be done? It’s unclear—but let’s “take stock.” 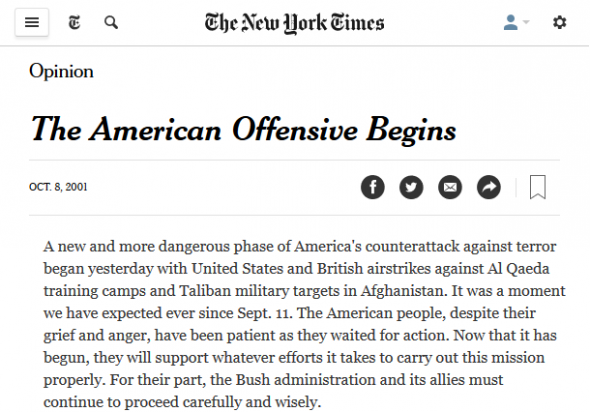 Left unmentioned in the editorial: from Afghanistan (both the 2001 invasion and Obama’s 2009 surge) to Iraq (the 2003 invasion and Obama re-entering the country in August 2014 to fight ISIS) to Syria (both CIA-backed regime change and bombing ISIS) to Korea to our drone wars in Pakistan, Yemen and Somalia, the New York Times has endorsed and often cheered every of these “forever wars.” And the “engagements” the Times didn’t expressly support (Thailand, Jordan, etc.), because they’re so routine as to not merit mention, there’s no record of them opposing. Indeed, as FAIR (3/27/17) has noted previously, the New York Times editorial board has not opposed a single US war since its equivocal and lukewarm opposition to Reagan’s invasion of Grenada 34 years ago (10/30/83).

When confronted with this fact on Twitter, New York Times foreign and defense policy editorial writer Carol Giacomo responded, “In last decade, NYT editorial board has raised many questions about US military engagements.” Raised many questions? Well, then, never mind; let’s leave the Times’ role in the creation of said global empire unexamined. 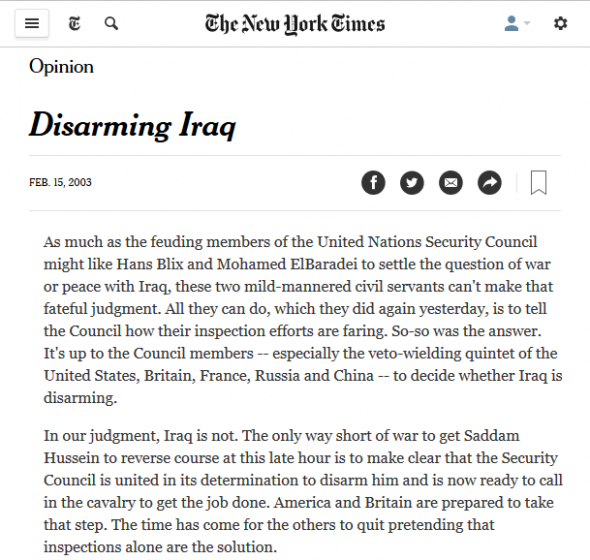 The Times spends a great deal of time trying to market itself as not being the rubber stamp pro-war outlet it manifestly is. To do this, it employs two main genres of nominal anti-war posturing. The first—previously commented on by FAIR (3/27/17)—is to call for congressional approval of a war, without actually opposing it or arguing against its underlying moral or political validity. It’s a process complaint that permits the New York Times to look Very Concerned without the messy work of actually opposing anyone in power. The argument is never “this war is wrong or unjust”; it’s “this war may be great, but we have a legal problem of not getting congressional buy-in—the absence of which is not problematic enough to make us actually oppose the war.”

The second is the morally half-assed “no boots on the ground” argument, like the one the Times employed in support of bombing ISIS in Iraq in 2014 (8/8/14) and the Syrian government in 2013 (8/27/13). They insisted, for example, that Obama “best follow through” on his threat to bomb the Syrian government, while still opposing “deep American involvement,” whatever that meant. This genre supports bombing people—typically brown and poor—from afar, but draws the line at using US troops to augment the long-distance killing.

The “no boots on the ground” pseudo-opposition is an admission that the only lives that matter are American, and that the PR pitfalls of body bags returning home on national TV are the only moral limit to the US invading and occupying other countries. Cruise missiles, drones, special forces raids, and covert funding and arming of dodgy rebel groups are A-OK, so long as there are no “boots on the ground”—a cliche, as FAIR has noted (5/19/15), that itself has an increasingly boutique definition. 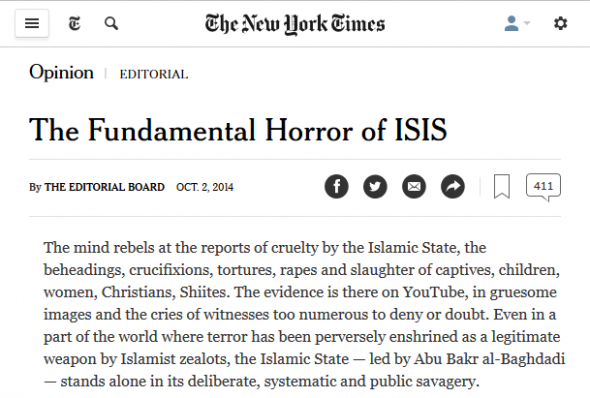 Both of these genres permit the New York Times to look like Conflicted Liberals, distressed about war without ever opposing it in any meaningful sense. Both modes typically involve appeals to gather more willing nations, other vague appeals to “international support” or running through legal motions, but, ultimately, after all the tortured language and qualifications, the Times always—always—ends up back at supporting the bombing. The Times acts not as an outside voice holding power to account, but as US empire’s internal compliance officer—there to warn of excesses and problems around the margins, but always with the best interest of their NatSec client at heart.

No such heavy-hearted qualifications, needless to say, exist for US enemies. Russia is “engaging in aggressive and dangerous behavior in the air and on the high seas,” the Times (5/19/16) insisted in an editorial condemning the “duplicity of President Vladimir Putin.” Iran’s “destabilizing role in the Mideast” is simply taken for granted (4/24/17); its actions routinely “deserve condemnation” (4/7/17).

Meanwhile, the US is presented as a good-faith arbiter of human rights and peacekeeping, with no broader military or cynical aims. “At least in recent decades,” the Times editorial board (2/7/17) childishly put it earlier this year, “American presidents who took military action have been driven by the desire to promote freedom and democracy.” Funny how that worked out.