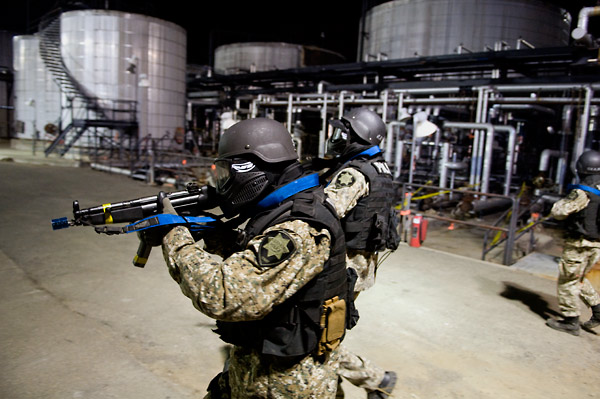 OAKLAND HAS played host each year recently to Urban Shield, a SWAT team exercise in which law enforcement teams from around the world practice, among other things, the use of force against protesters. But this year, community activists are calling on the city to refuse to turn the city’s streets into a sprawling stage for urban war games.

Oakland is a city already known for its lack of transparency, “a deeply troubled police department under federal oversight,” and a “process that shields the people making key decisions about its future from much public scrutiny,” according to investigative reporter Thomas Peele.

So perhaps it should be expected that Oakland City Council members were themselves surprised to find that buried within a fire department reimbursement request that they are accustomed to rubber-stamping were funds for the Alameda County Sheriff Department’s Urban Shield.

In fact, they found out about the funds and the purposes for which they were earmarked when community groups came forward to challenge city officials about how Urban Shield exacerbates the city’s poor track record in matters of transparency, accountability, human rights and funding priorities.

The resolution requested $200,000 to reimburse the fire department for a “safety drill”–a euphemism used by Urban Shield’s sponsors to promote its exercises as disaster-preparedness training for local police and fire departments. Meanwhile, public records show that the Sheriff’s office is being paid up to $7.5 million in federal funding for Urban Shield.

In reality, Urban Shield is the largest urban SWAT exercise in the U.S. and includes “competitions” that take place throughout Bay Area city streets. In addition to simulating the use of force against protesters, the event also includes a trade show so private manufacturers can market their latest weaponry, crowd control gear and other hardware to police.

For activists, the event embodies a host of problems facing ordinary people today–in particular, police violence and investment in militarism rather than in public services. These issues include the Oakland Police Department’s (OPD) violent suppression of the Occupy movement as well as police killings of unarmed civilians like Oscar Grant. Grant was murdered by a Bay Area Rapid Transit (BART) officer who claimed to have been reaching for a Taser, like those sold as “nonlethal” tools by Urban Shield vendors, when he shot and killed Grant at point-blank range.

These exercises also illustrate the misplaced funding priorities that feed a culture of militarism, heavy-handed policing and incarceration–while failing to address community needs, such as jobs, health care, housing and education.

THERE ARE now more than 50,000 SWAT raids every year in the United States. Oakland’s own “Tango Teams” have injured and killed numerous Oakland residents over the years, including protesters and journalists during OPD’s war on Occupy Oakland. According to Police Magazine, “Law enforcement agencies responding to…Occupy protesters in northern California credit Urban Shield for their effective teamwork.”

The law enforcement trade publication also suggests that cops should expect to face off against protesters more often “given today’s continuing sour economy.” James Baker, who is president of Cytel, the company that oversees the event, said after the 2011 “games” that Urban Shield had helped coordinate the police response to the protests of Oscar Grant’s killing. “The planning was amazing,” said Baker.

Urban Shield also reaches beyond the U.S., bringing together more than 150 local, state, federal and international agencies, as well as private defense contractors. In attendance will be police from Bahrain, Israel, Guam and Brazil, to name only a few of the participants with lengthy records of misconduct and human rights violations.

Urban Shield has grown considerably since the Alameda County Sheriff began hosting it six years ago. These violent war games are not new; a predecessor exercise named Urban Warrior took place in 1999 and served strikingly similar purposes–“to ready Marines for the likelihood that battles in the 21st century will be focused in the world’s rapidly expanding urban areas” and to test “combat operations in an urban environment against a backdrop of civil unrest and restore order.” But training for urban combat once reserved for Marines now seems to have moved to local police departments.

Rev. Daniel Buford of Allen Temple Baptist Church suggested to the Oakland City Council that if the city wants to collaborate with the Israeli government, it ought to be about how to keep Israeli weaponry, such as Uzis, “off our streets and out of the hands of our young people, rather than training our people on how to do checkpoints like they do on Palestinians.”

Following public comment, most council members were visibly taken aback by the nature of this event, and they criticized a police representative for failing to provide them with clear information in advance. Several councilors also voiced concern about the “culture of violence” that this represented, challenging the message that this “gun show” sends to young people.

Council member Lynette McElhaney thanked the clergy and activists who spoke out against Urban Shield for being “the conscience of our community,” and several expressed disagreement with the priorities of the federal government’s funding of the event.

In the end, the council voted to approve the reimbursement, with one abstention and just two council members, McElhaney and Rebecca Kaplan, voting against. However, the council voted unanimously to send a letter to the Oakland Marriott, which is the main venue for Urban Shield 2013, to inform the hotel of their disapproval.

OPPONENTS OF Urban Shield plan to continue organizing with a mobilization to the October 10 meeting of the Alameda County Board of Supervisors, which oversees the sheriff’s department hosting the event. Urban Shield’s October 25 kick-off exhibition will be met with a daylong community witness and walking picket, followed by a 5 p.m. rally.

As a coalition outreach letter explains:

Recognizing that, for people of color, poor and working-class people, gender and sexually non-conforming communities, and other oppressed groups, heightened policing hardly translates into safer communities, but rather greater surveillance, incarceration, and repression of progressive and radical social movements, our coalition has formed to refuse the ongoing militarization of our communities and to advocate for alternatives to policing…While we may not be able to stop Urban Shield this year, if we use Urban Shield 2013 as an opportunity to do education, outreach, and cross-movement building, perhaps we can stop it from happening again.

The availability of vast sums of federal grant money–to fund Urban Shield, to wage “war” on terrorism or drugs, but not to attack the scourge of poverty–encourages local officials to look to repression and incarceration to solve social problems. More fundamentally, responsibility lies with the inhumane priorities of a system that can always find funding and resources for violence, but is unable or unwilling to meet real human needs when it does not happen to be profitable.

In Urban Shield, we see that these kinds of violence–military conflict on the one hand and poverty on the other–are not just parallel; they are the consequence of a single economic and political system.

The people who carry the weapons on foreign battlefields and on urban streets often train together–and the same companies that profit from the militarization of police inside the U.S. also benefit from selling tools of repression abroad.

Join members of FUSAN to speak out at the Alameda County Board of Supervisors meeting on October 10 at 1:30 p.m., at 1221 Oak St.

On October 25, the first day of Urban Shield, there will be a community witness and picket from 9 a.m. to 5 p.m. at 11th and Broadway in front of the Oakland Marriott, followed by a 5 p.m. rally.

For more information, check out the FUSAN web site.