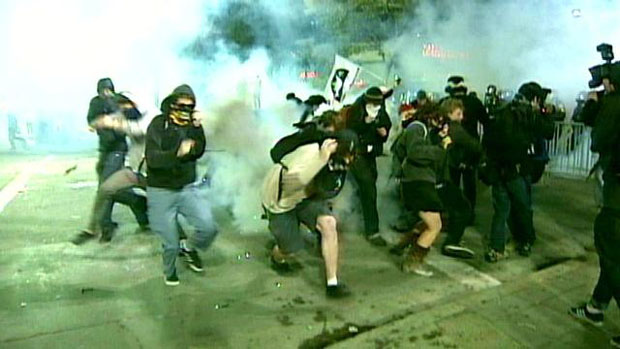 OAKLAND, Calif. — The Oakland City Council has given preliminary approval to a proposed $1.17 million settlement with 12 people who were injured during Occupy Oakland protests in 2011, according to the plaintiffs’ lawyers and the city attorney’s office.

The council still had to vote to give final approval as of Wednesday, and the vote was scheduled for a meeting on July 16, Katz said.

Rachel Lederman, a National Lawyers Guild attorney for the plaintiffs, said her clients will also seek a federal judge’s approval of a second part of the settlement concerning police procedures and arrests.

She said she expects U.S. District Judge Jon Tigar of San Francisco to sign off on that part of the settlement within a few days of the City Council’s final approval.

The settlement would end a 2011 federal civil rights lawsuit in which 12 people alleged they were injured by police actions, including the use of tear gas grenades and lead-shot-filled beanbags, during Occupy Oakland protests on Oct. 25 and the night of Nov. 2-3, 2011.

The largest award of $500,000 will go to Suzi Spangenberg, 53, a seminary student and photographer who suffered partial hearing loss and permanent severe ringing in her ears as a result of the explosion of two tear gas grenades at her feet late on Nov. 2, according to the National Lawyers Guild.

Journalist and videographer Scott Campbell, 33, who was wounded in the thigh that same night with a lead-shot-filled beanbag, would receive $150,000, the guild said.

Campbell said in a statement, “This is an important victory because it provides compensation for victims of police violence, and it shows that the Oakland police cannot get away with violating the rights of demonstrators.”

The other plaintiffs will receive financial compensation ranging from $20,000 to $75,000.

The non-financial part of the settlement will delete arrests records of five protesters and require the Police Department to abide by previously agreed-on crowd control policies and expedite procedures for processing and releasing people arrested at demonstrations.

That provision is the same as one in another proposed settlement announced by the National Lawyers Guild last week.

That other pact would end a class-action lawsuit filed against Oakland and Alameda County on behalf of 150 people who were arrested during a 2010 protest of the two-year sentence given to former BART officer Johannes Mehserle for the fatal shooting of Oscar Grant at an Oakland BART station on New Year’s Day in 2009.

In addition to requiring the change in police practices, that settlement would give $650,000 to those who were arrested and $350,000 to the National Lawyers Guild for attorney fees.

U.S. District Judge Thelton Henderson of San Francisco tentatively approved that agreement on June 13 and was scheduled to hold a final approval hearing on Sept. 9.

Katz said Wednesday that the city attorney’s office could not comment on the planned Occupy Oakland lawsuit settlement because it was not yet final.

A proposed resolution that was expected to go before the City Council on July 16 for final approval of the agreement states that the city has determined the settlement is in the city’s best interest, but “without admission of liability.”