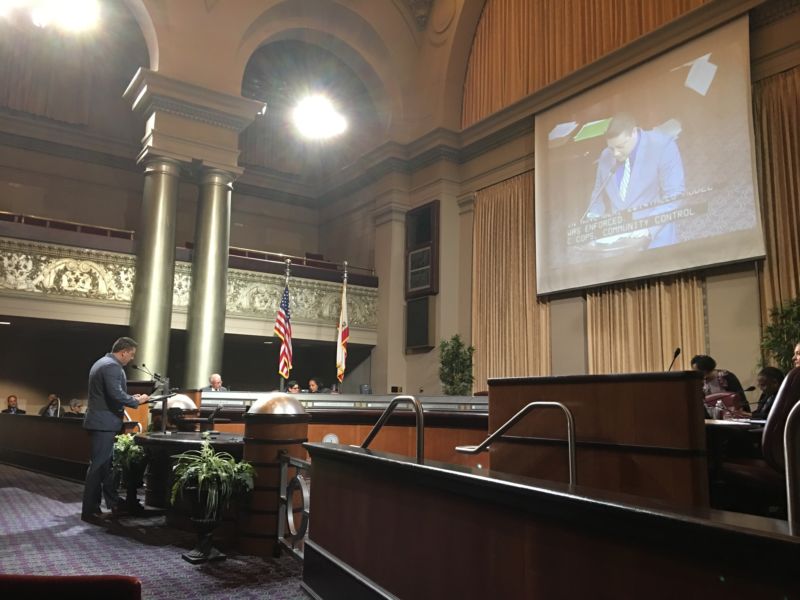 Above Photo: Cyrus Farivar/ Enlarge / Brian Hofer, the chair of the Privacy Advisory Commission, speaks before the Oakland City Council.

“They are even being exploited by the federal government to fuel mass deportations.”

OAKLAND, Calif.—Late Tuesday evening, the Oakland City Council formally approved a new city ordinance that imposes community control over the use of surveillance technology in the city.

Oakland is now one of a number of California cities, including Berkeley and Davis, that mandates a formal annual report that details “how the surveillance technology was used,” among other requirements.

In the wake of Oakland’s 2013 efforts to approve federal grant money to construct a “Domain Awareness Center,” the city has now also created a “Privacy Advisory Commission,” or PAC. This body, composed of volunteer commissioners from each city council district, acts as a privacy check on the city when any municipal entity (typically the police department) wants to acquire a technology that may impinge on individual privacy.

The new law requires that the PAC be notified if the city is spending money or seeking outside grant money to be spent on any hardware or software that could potentially impact privacy. Notably, Oakland’s law specifically includes provisions that forbid non-disclosure agreements and protect whistleblowers.

According to Brian Hofer, the chair of the PAC, Oakland is now the seventh municipal entity or county to pass such legislative measures. The ordinance was crafted with the assistance of the American Civil Liberties Union of Northern California.

Tessa D’Arcangelew of the ACLU of Northern California spoke at the meeting and called the ordinance the “strongest ordinance in the country.” She added that the new law would give “communities the power to understand the technologies that are being proposed in the city and to have a voice in saying if, when, and how surveillance is used in the city.”

In a statement, one of the ACLU of Northern California’s top officials, Nicole Ozer, applauded the ordinance’s passage. She wrote:

Surveillance technologies, which have been increasingly acquired in secret and are used almost exclusively without a warrant, have invaded residents’ lives across the state. They are even being exploited by the federal government to fuel mass deportations, tearing California families apart. In a gross violation of privacy, [Immigration and Customs Enforcement] has acquired local data from license plate readers and other technologies that track residents without their consent.