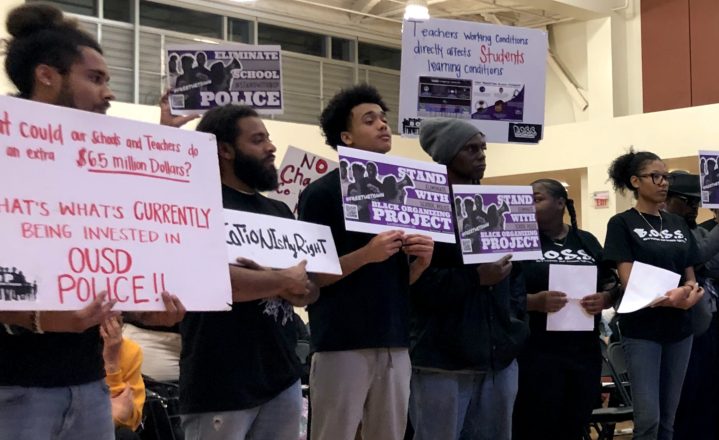 Oakland School Board Votes To Remove Police From School

After about a two-hour debate the Oakland School Board tonight voted unanimously to eliminate the Oakland Unified School District Police Department from campuses.

The Board also added several amendments to the final proposal. One requires the superintendent to ensure all staff receive training.

Citing the disproportionate arrests of Black students by Oakland’s school police, as well as the district’s “obligation to promote the healthy development of each one of its students” and the many alternative ways to handle discipline inside schools, the board directed the superintendent to take steps required to eliminate the department.

From the 2015-2016 school year through 2019-2020, Black students have accounted for 73 percent of arrests in city schools but just 26 percent of enrollment, according to the resolution.

This “preemptive policing,” according to the resolution, is undermining the economic and public health of Oakland’s Black community and restricting access to graduation and opportunity.

“We are overwhelmed with emotion and filled with gratitude for this historic win. We thank the Board for taking this monumental step, and the Black youth and parents, and community and administrative partners who fought with us to make this possible,” said BOP in a statement.

“Today, with a vote by the school board, we can have not just police-free schools, but shift our school’s security officers into culture keepers on our campus,” said Mike Hutchinson with the Journey for Justice Alliance.

For activists in Oakland, this has been a goal for years; disbanding school police officers in favor of more social workers.

One voice of skepticism ahead of Wednesday night’s vote was California Schools Superintendent Tony Thurmond.

“I’m aware that there are some districts in our state that have already gone through this action, long before this conversation,” Thurmond said in a conference call with reporters. “Many of those school districts made the decision to remove all their school resource officer programs, but they didn’t create an alternative program. And what they found, as a result, they had to come right back to the same policing model on campus.”

“We are on a trajectory for police-free schools going forward,” said Hutchinson.

Now that the resolution has been approved, the school police would be out before the start of the next school year. What exactly wil take the place of the police force is still to be determined. The resolution calls for a “community-driven process” that would develop a new safety plan, by no later than August 21st.