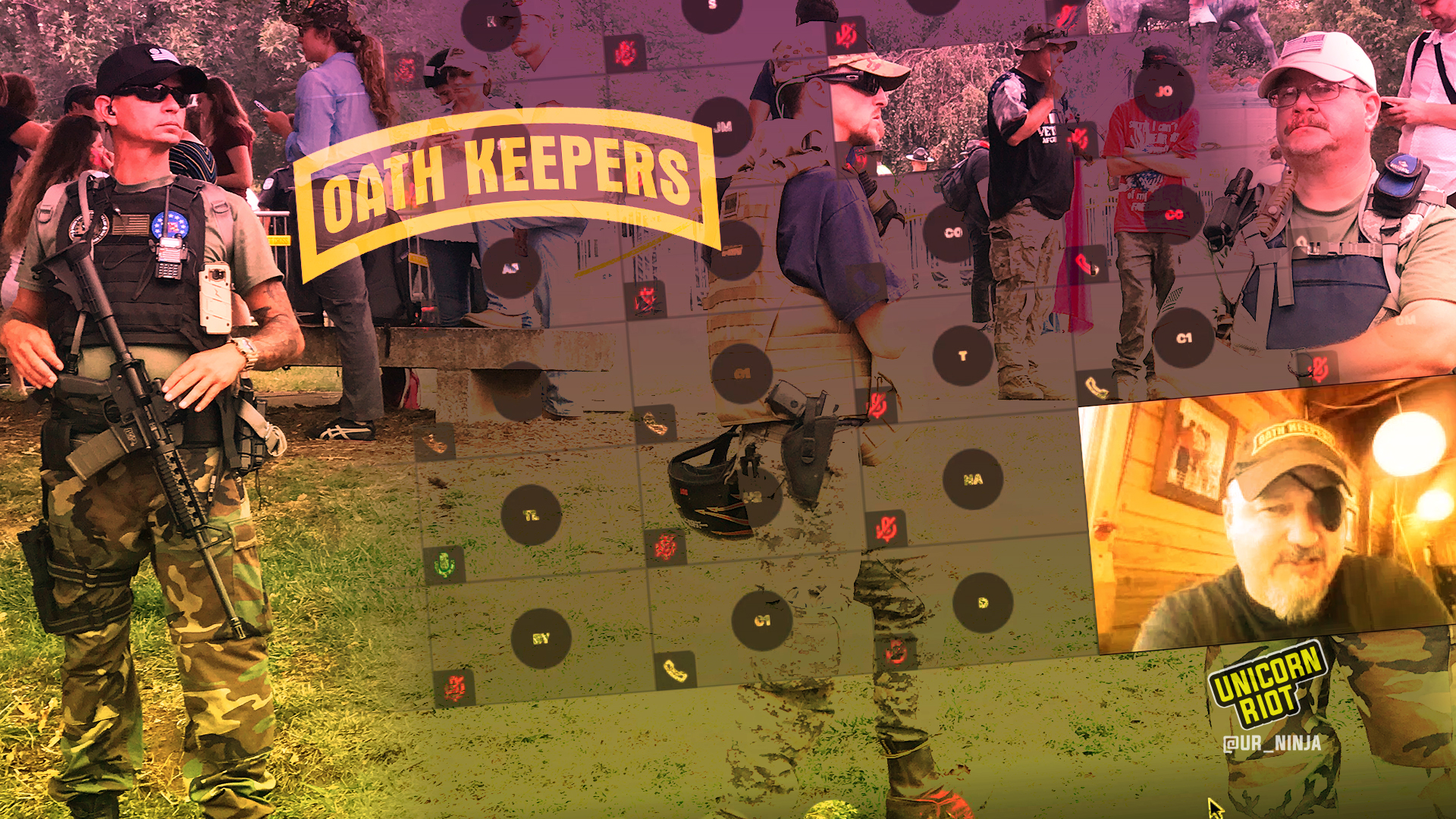 As Donald Trump nears the end of his elected presidential term, far-right and fascist groups maneuver to exploit rage among his supporters.

The Oath Keepers, a militia made up of mostly retired military and law enforcement employees, have long sought to pose as a militant vanguard among Trump supporters, particularly older men. The group and its eyepatch-sporting leader Stewart Rhodes often acted as a paper tiger in recent years; blustering and ominous threats against antifascists and liberal protesters failed to materialize in concrete organizing steps.

Since Donald Trump’s decisive loss in the 2020 presidential election, the Oath Keepers escalated their rhetoric: encouraging violent attacks on anti-racist and liberal protesters as well as members of the news media. Leaked private communications from inside the militia group, obtained by Unicorn Riot and available to download below, show their members are growing increasingly desperate and specific in violent ideations. 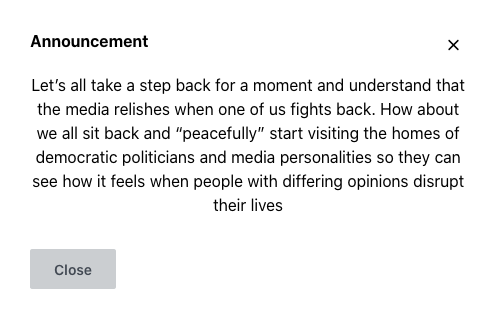 “Let’s all take a step back for a moment and understand that the media relishes when one of us fights back. How about we all sit back and ‘peacefully’ start visiting the homes of democratic politicians and media personalities so they can see how it feels when people with differing opinions disrupt their lives,” the pinned message read.

The statement by the Oath Keepers captures the growing agitation among far-right networks. While militias have always engaged in plausible deniability rhetoric of ‘self-defense’, they’ve increasingly come to interpret nearly anything as an attack – and their desire to fight has shifted from generalized fantasy toward specific targets. 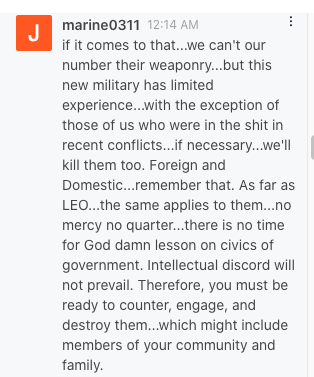 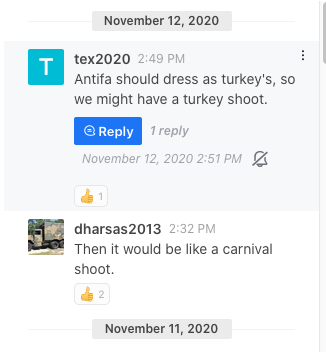 While the far-right has never enjoyed the mainstream media, they now discuss targeting them openly. “Why hasn’t anyone talked about the Media,” asked Oath Keeper ‘Rsmutny’. “I think they have to be a main target of ours.”

“I agree,” added RocketChat user ‘BradfordCountyPA’. “It’s not freedom of speech when sedition is the goal and lies are the means. If we don’t take action we’ll all be going to the gulag.”

“Rhetoric within militia spaces I observe has been of high temperature for much of the summer, growing in intensity in and beyond the election. Fantasies of violence became more specific, discussion of lethal force more normalized, and the field of potential ‘targets’ continued to grow,” said Hampton Stall, founder of MilitiaWatch, a publication tracking armed far-right militias in the United States. 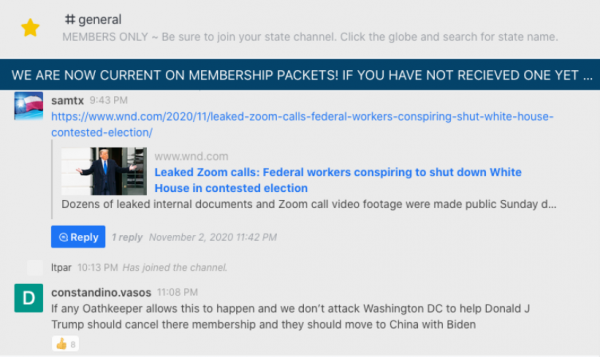 The Oath Keepers run their online forum via RocketChat. Though the site claims to be members-only, the login page will create an account for anyone who provides a name and email and offers full access to the chats and chat histories.

The Oath Keeper chat scrapes provided here cover July 2020 – when the forum was first created – through November 9, 2020. At the bottom of this piece are links to download the chats in both JSON and TXT format.

“If any Oathkeeper allows this to happen and we don’t attack Washington DC to help Donald J Trump should cancel their membership and they should move to China with Biden,” wrote ‘constandino.vasos’ in the site’s ‘General’ chat room, in response to an election article from World Net Daily, a far-right disinformation site. 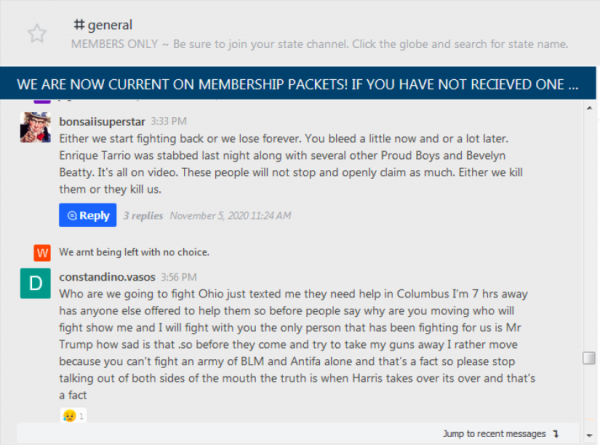 In the forum hosted at oathkeepersnational.org, members escalate their rhetoric and egg each other on. There are few, if any, attempts to de-escalate the calls to violent action.

“Either we start fighting back or we lose forever,” wrote Oath Keeper bonsaiisuperstar (real name Michael Ottis Wilson of Lebanon, Ohio). “You bleed a little now or a lot later… Either we kill them or they kill us.”

In his profile on Parler, a newer ‘free speech’ social network serving as a hub for far-right disinformation, Wilson wrote that it was “time to start executing lefties openly and violently” and “to start killing the news media live on air.” As of this writing, he is still active in the Oath Keepers chats and his account is still live on Parler.

Rhetoric coming from the Oath Keepers’ leadership has followed the same escalatory path.

On Tuesday, November 10, Oath Keepers leader Stewart Rhodes appeared on InfoWars, claiming their members are on standby outside DC as a “nuclear option”.

“We have men already stationed outside DC as a nuclear option. In case they attempt to remove the President illegally, we will step in and stop it. We will be on the outside of DC, armed, if the President calls us up,” Rhodes told host Alex Jones.

A November 8 livestream from Stewart Rhodes showed members of the group in Purcellville, Virginia, attending a pro-Trump ‘Stop the Steal’ rally.

On a November 11 phone check-in, leaders of the Oath Keepers told membership to set their navigators for Kernstown, Virginia and to call a specific member for in-person vetting. The group has been vetting members at the Lowe’s in Winchester, Virginia, where approximately 25-30 members are staying in a converted garage/barn.

The night before the Million MAGA March, Rhodes didn’t back down from his fiery rhetoric.

On November 13, Rhodes joined the Oath Keepers’ private call late, which he said was because was at Home Depot. He then told the group of approximately 50 members that Saturday, November 14, would be “an ongoing operation, day one of patriots occupying DC.” Rhodes continued that “[Trump] has a responsibility and duty to suppress that insurrection repel the invasion of the communist Chinese and all their allies…. I’m telling you straight up, guys, if he doesn’t drop the hammer on this communist insurrection, we are going to end up fighting a bloody civil war in this country to defeat them. Horrific. More of us are going to die.”

“I think regardless that’s going to happen,” a member offered.

“Well, sure,” Rhodes said. “But it’s better to fight it while he’s Commander-in-Chief. We’re not going to get out of this without a fight, that’s a friggin’ fact.”

Rhodes went on to request donations, saying that while the group had been banned through PayPal, the group could Venmo money to the group through a man named Jim Donaldson. A Venmo profile for “jim-donaldson-3” depicts a Louisiana man in an Oath Keepers hat.

The Oath Keepers strategy for ingratiating themselves with local law enforcement is outlined in a document entitled ‘Outreach to County Sheriff Guide‘, included in the militia’s chat forum.

The guide offers pointers on how to sidestep potential concerns about militia members seeking collaboration with their county sheriff. Oath Keepers members are encouraged to offer to act as a deputized “posse” for their local sheriff, and to target persuasive efforts towards the head elected sheriff directly, which have authority and discretion that sheriff’s deputies don’t, the guide explains.

Militia members seeking to influence their county sheriff are also instructed to reference the work of Richard Mack, the former sheriff in Graham County, Arizona who founded the far-right Constitutionalist Sheriffs and Peace Officers Association (CSPOA), is involved with the Gun Owners of America (GOA) and has also served on the Oath Keepers’ board of directors.

According to Political Research Associates, more than 400 sheriffs since 2013 have been claimed as “Constitutional” by the militia movement, with 161 currently in office – and significant overlap with the National Sheriffs’ Association (NSA). NSA spearheaded an ‘information war’ against the movement against the Dakota Access Pipeline, Unicorn Riot reported in 2017. More about how Mack and CSPOA organize among sheriffs is available here.

A list of propaganda outreach materials Oath Keepers are told to deliver to their local sheriff include pocket constitutions, seminar materials by Mack, various Oath Keepers literature, and a copy of an open letter to law enforcement written by Ohio Oath Keeper Jim Singleton.

Another document included in the chat titled ‘Call To Rise‘ includes vague inspirational rhetoric reminiscent of the Mel Gibson film Braveheart. The screed claims that the American public is reaching a “hundredth monkey effect” which will lead to an alleged “Great Awakening“, a phrase also popular amongst adherents of the violent far-right Qanon conspiracy theory.

You can download the full Oath Keepers chat archive: