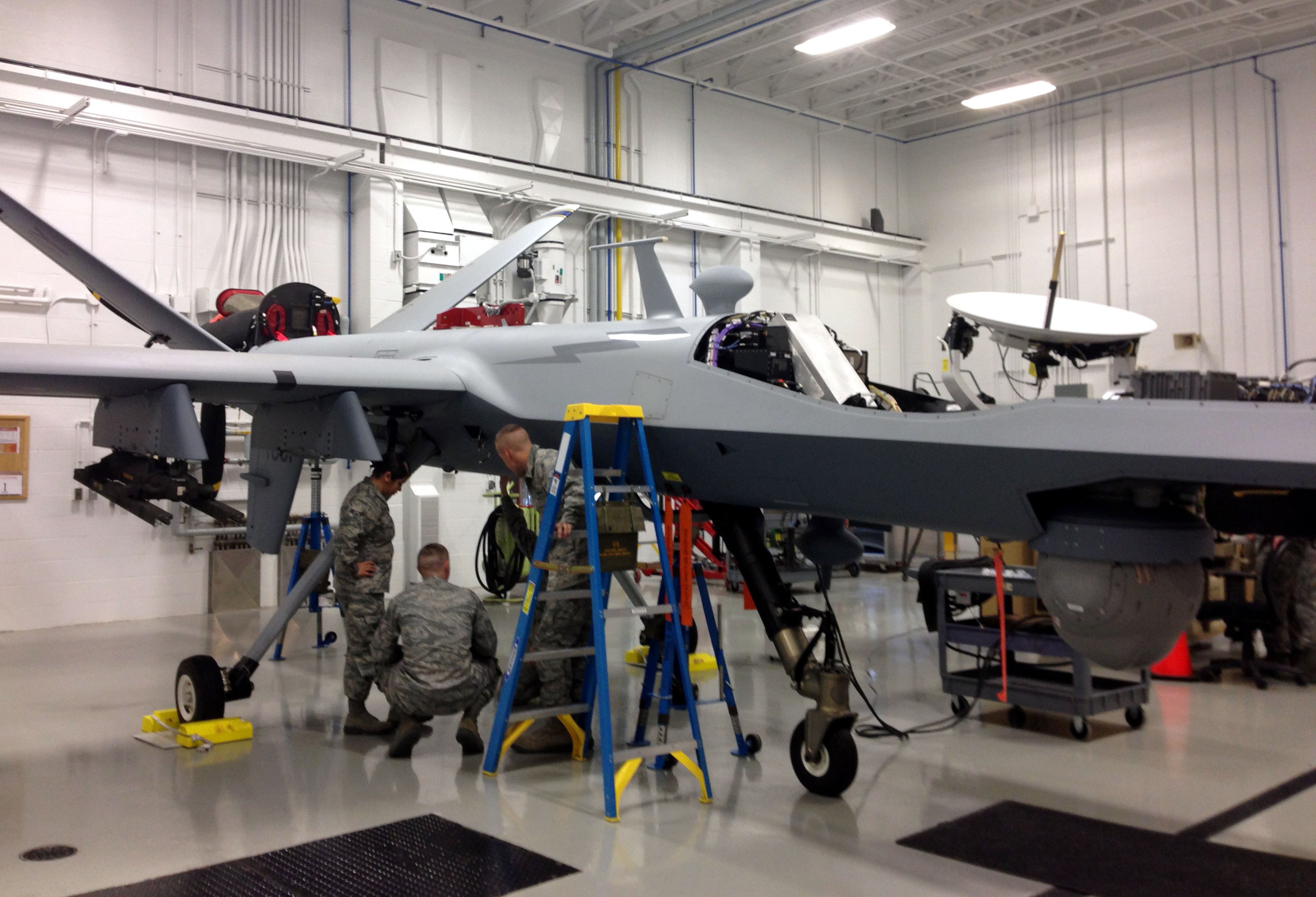 Above: MQ-9 Reaper Drone at Hancock Air Base in Syracuse, NY.

He is known as Abdullah al-Shami, an Arabic name meaning Abdullah the Syrian. But his nom de guerre masks a reality: He was born in the United States, and the United States is now deciding whether to kill him.

Mr. Shami, a militant who American officials say is living in the barren mountains of northwestern Pakistan, is at the center of a debate inside the government over whether President Obama should once again take the extraordinary step of authorizing the killing of an American citizen overseas.

It is a debate that encapsulates some of the thorniest questions raised by the targeted killing program that Mr. Obama has embraced as president: under what circumstances the government may kill American citizens without a trial, whether the battered leadership of Al Qaeda in Pakistan still poses an imminent threat to Americans, and whether the C.I.A. or the Pentagon ought to be the dominant agency running America’s secret wars.

Interviews with American officials and outside terrorism experts sketch only the most impressionistic portraits of Mr. Shami.

Born in the United States, possibly in Texas, he moved with his family to the Middle East when he was a toddler. Obama administration officials declined requests to provide biographical information about Mr. Shami such as his real name and age — saying that the information is classified — or any specific information about where he was born or where he traveled after leaving the United States. But his nom de guerre has a familiar ring for jihadists: An operative of Al Qaeda named Abu Abdullah al-Shami escaped with three other people from the American military prison in Bagram, Afghanistan, in 2005 and was killed in a drone strike three years later.

He came to the attention of the American authorities in 2008, around the same time that another American, Bryant Neal Vinas, was getting Qaeda training in Pakistan, one former counterterrorism official recalled. The authorities worried at the time that a surge of people with terrorism training and Western passports might be coming to the United States. Mr. Vinas was later captured and brought back to the United States, where he pleaded guilty to terrorism charges.

The F.B.I. investigated Mr. Shami and determined that he had been born in the United States, but that he had left as a young child and had not maintained any ties to the country. In the years since then, Mr. Shami worked his way up the ranks of Al Qaeda’s senior leadership in Pakistan, his ascent aided by his marriage to the daughter of a top Qaeda leader. Last year, he appears to have risen to become one of Al Qaeda’s top planners for operations outside Pakistan, including plots against American troops in Afghanistan.

“We have clear and convincing evidence that he’s involved in the production and distribution of I.E.D.’s,” said one senior administration official, referring to improvised explosive devices, long the leading killer of American troops in Afghanistan.

Spokesmen for the Pentagon, the C.I.A. and the F.B.I. and a spokeswoman for the White House all declined to comment.

For someone with an elevated position in Al Qaeda, Mr. Shami has kept an unusually low profile. He has made no propaganda videos, nor does he seem to have been mentioned in any of the myriad online forums that militant groups use to motivate their followers, raise money and recruit new fighters.

Some terrorism experts said that it could be a calculated strategy by Al Qaeda not to broadcast the growing role of an American inside the organization, or that the group might refer to Mr. Shami by another name. Still others said that it might just be an act of self-preservation on Mr. Shami’s part, given that so many of the people who have planned external operations for Al Qaeda — including Ilyas Kashmiri and Saleh al-Somali — were killed by American drones.

“At some point, it would probably make sense not to advertise these positions,” said Seth Jones, a terrorism expert at the RAND Corporation. Mr. Jones said that Mr. Shami had made “a very conscious effort to stay below the radar.”

The debate over Mr. Shami’s fate is the first time that the Obama administration has discussed killing an American citizen abroad since Anwar al-Awlaki was killed in a C.I.A. drone strike in Yemen in September 2011. It comes less than a year after Mr. Obama announced new guidelines to tighten the rules for carrying out lethal drone operations. When the president announced the guidelines, during a speech in May in Washington, the White House acknowledged that four American citizens had been killed in drone strikes during Mr. Obama’s time in office.

According to the White House, only Mr. Awlaki had been targeted.

As it was in Mr. Awlaki’s case, the Justice Department has been enlisted to evaluate whether a lethal operation against Mr. Shami is legally justified, but it appears that the Obama administration remains divided on the issue. Several officials said that the C.I.A. has long advocated killing Mr. Shami, and that the Pentagon, while initially reluctant to put him on a target list, has more recently come to the C.I.A.’s position.

It is unclear what Mr. Obama’s position is on whether Mr. Shami should be targeted. American officials said that as part of the new rules ordered by Mr. Obama, the Pentagon, rather than the C.I.A., is supposed to carry out any lethal strike against an American overseas, a provision intended to allow government officials to speak more freely about the operation after it is carried out.

This has complicated discussions about Mr. Shami, since the C.I.A. alone carries out drone strikes in Pakistan, under the agency’s covert action authority. This was one of the conditions of a bargain that the spy agency struck in 2004 with President Pervez Musharraf of Pakistan to allow the C.I.A. to carry out drone strikes in the country.

A decade later, many argue that there is little more transparency to the drone program.

“Given the significance of the authority the administration is claiming, it’s quite remarkable how little information it’s disclosed,” said Jameel Jaffer of the American Civil Liberties Union, who has been involved in legal challenges to the targeted killing program.

Some lawmakers have reacted angrily to the new drone rules, calling them overly restrictive. Representative Mike Rogers, the Michigan Republican who is the chairman of the Intelligence Committee, this month deplored a new environment of “self-imposed red tape.”