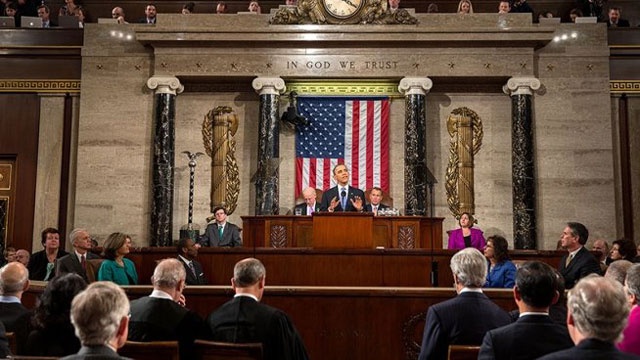 Today, January 28, 2014, President Obama will address the nation in his State of the Union (SOTU) speech to Congress.  A major theme of the address will be the growing income inequality in the US.

His speech represents an echo of similar themes and talks that have been presented this past week at the World Economic Forum (WEF) in Davos, Switzerland.  That’s where every January the big capitalists of the world gather to discuss amongst themselves the major issues of the past year and what to do about them—in between being entertained by various cultural celebrities and performers who have been allowed into their club as junior partners in wealth. The annual Davos cultural events are not unlike the small venue side-shows held in the big Las Vegas casinos: the entertainers strut and sing while the real betting and dice-rolling discussions involving future capitalist policy initiatives go on behind ‘invitation-only’ doors requiring tickets for entry costing hundreds of thousands of dollars to attend ( the typical ticket price of entry for a Corporate CEO and his entourage at Davos, for example, exceeds $500,000).

This year the WEF and global capitalists have ‘discovered’ income inequality, now accelerating and intensifying worldwide to a dangerous degree, and especially in the US. The dimensions of the inequality problem have grown so severe in recent years it may, they themselves are now warning, result in unwanted ‘social unrest’ in the near future.

Now that it has become an ‘acceptable’ discussion theme, Obama and Democrat party politicians (and a few clever Republicans) have also discovered income inequality. Together they plan to raise the rhetoric on the topic in upcoming midterm and 2016 national elections.  Therefore, in Obama’s SOTU speech today we’ll hear some basic facts about the problem, some vague proposals that are never intended get to the earliest legislative stages, and a lot of general talk about how improving ‘opportunity’ is the only answer to reducing inequality—all of which means let’s not do anything significant in the short run but instead focus on very long run solutions like improving childhood education, creating long run opportunities, and other very long term solutions.

The politicians’ new discovery of inequality follows liberal academics discovery of the same in recent years.  Well known fellows like Paul Krugman, Robert Reich, Joe Stiglitz, James Galbraith and others have all written their books on the topic in recent years.  But they too, like the politicians they support, have been very careful about recommendations for resolving the problem, mostly repeating time-worn, mushy old liberal proposals involving ‘education and opportunity’ once again.

The growing income inequality in the US goes back at least to the late 1970s, accelerating during the 1980s and early 1990s, and then again after 2000 under George W. Bush. It’s grown the worst under Barack Obama, with latest figures showing the wealthiest 1% households accruing for themselves since 2009 nearly all (more than 90%) of all the income gains during the so-called ‘recovery’.

More recent, damning revelations about the extent of growing inequality go back to 2002 at least—long before the politicians and the more well known liberal economists acknowledged it.  In 2002 University of California, Berkeley economist, Emmanuel Saez, began publishing his analyses of IRS income data, since all pre-existing sources of income inequality by the government and business more or less obfuscated the true picture.  Saez has updated his ground-breaking results periodically ever since.  Most of what is reported and published about the income gains of the wealthiest 1% are from his researches.

This writer relied heavily on Saez’s data in his 2004 book, ‘The War At Home: The Corporate Offensive From Ronald Reagan to George W. Bush’, which attempted to identify the various policies since the late 1970s that have been largely responsible for the inequality shift that Saez so well documented in 2002.  Saez’s hard data—then and ever since—is irrefutable. However, the political implications behind Saez’s data were not spelled out, except for some suggestions concerning the tax structure.

There’s the tax restructuring in favor of the rich and their businesses, the free trade and offshoring, the atrophying of the real minimum wage, the dismantling of real pensions and employer contributions to healthcare, the shift from full time permanent jobs to part time and temp work, the destruction of unions and higher paying union jobs, the displacing of higher paid jobs with technology, substitution of credit for lack of wage growth, failure to invest in the US by corporate America, so on and so on.. That’s why jobs, real wages, and incomes for the vast majority of American households has stagnated at best, and declined in real terms for most. That’s why wage earners’ income of the bottom 80% households have contributed to income inequality.

Corporate America and their politicians, and the policies they’ve initiated and implemented, are responsible for the accelerating capital incomes of the rich (1%), very rich (0.1%), and mega-rich (0.01%).  And much of that has to do with the enabling of financial asset speculation and financial securities inflation that has been the defining characteristic of the US (and global) economy since at least the 1980s. Reagan unlocked that door.  Clinton opened it. And George W. kicked it in.  And Obama has done nothing to repair the entry.

Real solutions to income inequality would have to include proposals not only to enable the recovery of incomes of the middle working class, and the working and non-working poor, but would have to include proposals to reign in the runaway income accumulation of the very rich, the mega-rich and their friends.  But you won’t hear the latter even suggested in Obama’s SOTU speech.  What you’ll hear are token long run proposals to slow the decline in income growth for the working poor perhaps, and a lot of vague suggestions about the middle class.

What the middle class needs is decent jobs and tens of millions of them, just to restore what has been lost in the past 15 years. There are still 20 million unemployed in the US, and more than 5 million more have left the labor force.  60% of the jobs that have been created since 2009 have been low paid, while 58% lost have been high paid.  Retirement systems are broken and retirees income for tens of millions are in freefall. Obamacare has meant those with insurance now have to pay more for less. Tens of millions of students are effectively indentured and can’t find jobs. If Obama and his politicians want to do something about income inequality, let’s hear concrete legislative proposals to address these issues now, immediately, in the short run.

It took the Krugmans, Reichs, and Stiglitzes only a decade to ‘discover’ their academic colleague, Saez’s, significant work.  Better late than never, I suppose. However none of the liberal economists bother to point the finger at the politicians responsible, especially their Democratic party friends, for the inequality trends.  But if anything serious is going to be done about income inequality in the US, it will have to include not only real, short term solutions to raise the incomes of the many but also serious, real measures to take back the excessive income gains of the rich and super-rich as well.

For the latter will be necessary to fund and restore decent jobs and wages, to revitalize a crumbling retirement system, to save a collapsing healthcare system, and, yes, even to provide affordable education opportunities for all.

Jack Rasmus is the author of the book, ‘Obama’s Economy: Recovery for the Few’, Pluto press, 2012 and ‘Epic Recession: Prelude to Global Depression’, Pluto, 2010. He is the host of the weekly radio show, ‘Alternative Visions’, on the Progressive Radio Network. His website is www.kyklosproductions.com, his blog, jackrasmus.com, and twitter handle, @drjackrasmus.