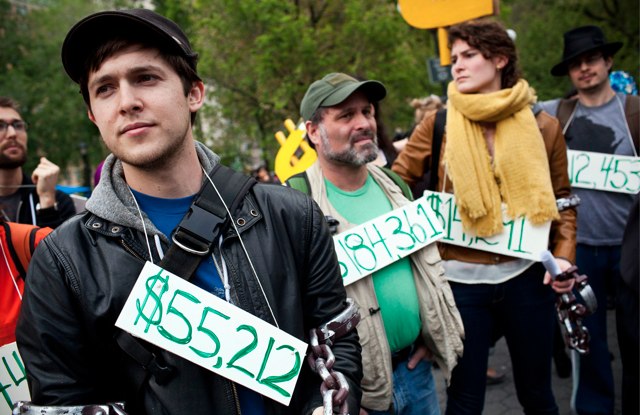 Professional Faculty Disappointed With Failure To Confront Rising Tuition, Rising Debt and Reliance On Adjunct Faculty But Not Surprised As Consistent With Obama Education Policy

Faculty members overwhelmingly supported President Obama in his candidacies. To many, his academic background and intellectual bent were welcome relief after his predecessor. Obama – a former law professor at the University of Chicago – was one of them.

But in reacting to Obama’s higher education policy speech at the State University of New York at Buffalo Thursday, in which the president proposed a ratings system for institutions to be tied to federal aid, faculty members expressed disappointment. While emphasizing that access to college is a good thing, they said, the speech failed to address deeper problems facing higher education — such as lack of funding, skyrocketing tuition and the increasing employment of adjunct faculty — and was too enthusiastic about massive open online courses (MOOCs), whose pedagogical effectiveness remains largely untested.

Many faculty advocates said they weren’t surprised, however, and said that other choices in Obama’s presidency reflected what they saw in his plan for higher education: a patchwork of conservative and liberal policies that fell far short of pleasing everyone – or, depending on one’s opinion, anyone.

More importantly, they said, the plan focuses on certain measurable student outcomes – such as graduation rates – but would do little to ensure actual student learning.

That led some to dub it a kind of “No Child Left Behind” for higher education.

“This doesn’t really surprise me – I didn’t really have any illusions as to the positions he had,” said Rudy Fichtenbaum, president of the American Association of University Professors and a professor of economics at Wright State University. “When he picked Arne Duncan [a proponent of the controversial Common Core initiative to standardize K-12 education] to be the secretary of education, that sort of set the tone for where his educational policy would be headed.”

Fichtenbaum said he found Obama’s speech troubling, and said it would inevitably force non-elite universities to move toward a more standardized curriculum suited to quantifiable outcomes in order to court funding.

“I think that colleges will be looking at ratings – looking at who’s getting the highest rating – and that will begin to drive [where they invest] their money,” he said. That could mean diverting funds away from full-time faculty positions, among other actions linked to negative student learning outcomes.

Robert Samuels, lecturer of writing at the University of California at Los Angeles and president of the University of California’s American Federation of Teachers faculty union, called Obama’s plan a “Band-Aid approach,” one that appropriates liberal think tanks ideals – such as the Bill & Melinda Gates Foundation’s “obsession” with access – and notions supported by many conservative groups, such as increasing dependence on MOOCs and competency-based initiatives.

Samuels, author of Why Public Higher Education Should Be Free: How to Decrease Cost and Increase Quality at American Universities, said he’d traveled to the White House several times to meet with policymakers, and wasn’t surprised by the plan. Obama seems much more invested in controlling student debt through Pell Grants than reprogramming the system because, ultimately, the system worked for him, Samuels said.

Instead of his being a former professor, Samuels said, the president’s approach to higher education is likely more informed by his own experiences as a student from a lower-income family who found success at two Ivy League institutions – Columbia University, where he earned his undergraduate degree, and Harvard University, where he attended law school. That could blind him to the possibility that what has traditionally been a “meritocracy” has become an “aristocracy,” where only some can afford tuition costs that have greatly outpaced the growth of household income, he said.

Aaron Bady, Ph.D. candidate in African literature at the University of California at Berkeley and a higher education blogger, said he didn’t think the plan seemed “serious.”

“The idea that ranking universities according to new metrics will do anything to lower costs seems delusional; a lack of information is simply not the problem,” he said in an e-mail. “The problem is the lack of good choices, the fact that cutbacks to higher education funding have so degraded the ability of public universities to provide a low-cost quality education; the lack of good public options as an alternative to private and for-profit education is what makes a degree so expensive.

He noted numerous references to educational “value,” in Obama’s plan, including consideration of graduates’ salaries: “Shifting Pell Grant money to colleges that provide good ‘value’ (however he plans to define it) is unlikely to do anything but create perverse incentives in the system.”

James Grossman, executive director of the American Historical Association, was less critical, acknowledging that Obama has a “tough job.”

“I am pleased that President Obama considers the state of American higher education to be a high priority for his administration, and that he has placed access at the center of his agenda,” he said in an e-mail. “He has spoken frequently and eloquently about the importance of broadening access to higher education, and all of the opportunities implied by that access.”

However, Grossman said was concerned by the apparent “narrowing” definition of those opportunities.

“The White House Press Office fact sheet [on the plan] mentions ‘value’ 18 times,” he said. “Not once does it talk about that ‘value’ in terms of the quality and content of education.”

Grossman continued: “I’m not seeing the value of a college education in terms of participation in public culture, or a graduate’s acquisition of the skills and curiosity essential to ‘learning how to learn.’ … Do we really want to say that an elementary school teacher has had a less successful college education than a hedge fund manager? I hope not.”

Carol Schneider, president of the Association of American Colleges and Universities, said via e-mail: “I certainly believe that encouraging innovation designed to provide more students with quality learning outcomes at lower cost is worth doing from the federal level. However, taken as a whole, the proposals seem at cross purposes at best and potentially damaging to the pursuit of quality at worst. How can you call for learning centered innovation, on the one hand, and then propose a federal rating system that leaves quality learning indicators off the table? The invocation of quality seems like pious rhetoric while the measures that will have teeth are all about narrow indicators such as earnings and completion rates.”

Marianne Hirsch, president of the Modern Language Association and professor of English at Columbia University, had a similar reaction, applauding Obama’s emphasis on access and addressing student debt through a renewed commitment to Pell Grants, but criticizing the plan’s emphasis on outcomes rather than on learning.

“I worry about the over-reliance on ratings and test results in the plan, the way it risks encouraging colleges to admit good test takers, and prepare students for easily measurable outcomes,” she said. “Instead, we need to be attentive to the complex process of learning and deepening knowledge and recognize that studying fields such as the humanities pay lifelong career benefits.”

Hirsch also pointed out what she saw as an overreliance on massive open online courses (MOOCs), still in their infancy, as the primary vehicle of innovation.

Bady said that was the most troubling part of the plan.

Obama “is putting all his chips in the MOOC basket,” he said. “No part of the plan is grounded in the reality-based community; it’s all buzzwords and fantasies that some future technology will magically lower costs. But none of these projects have really advanced beyond the ‘maybe someday it’ll lower costs’ stage; right now, it’s all speculation.”

The president’s reference to “offering colleges regulatory flexibility to innovate” is worrisome, he added, in that Obama may intend to extend online and MOOC programs a special exception from having to prove or demonstrate their value with actual results, “forcing colleges to defund tried and tested programs in favor of flavor-of-the-month Silicon Valley start-up partnerships.”

In an e-mail, she said, that’s been “the preferred ‘high quality/low cost’ strategy used by higher education for the last several decades, [so] it stands to reason that this plan will be used to justify its perpetuation unless people start coming to their senses and start confronting the documented effects of having a majority contingent faculty work force.”

But such measures are only low-cost up front, she said, citing the University of Southern California’s Delphi Project and other research linking overemployment of adjunct professors to decreased student success.

Maisto said the organization expected more from Obama – and still does.

“We expected him — and still expect him — to be able to apply some critical thinking to the strategies that have been brought to him by groups that have deliberately excluded faculty,” she said. “What is so disappointing about this plan is that it was devised without any significant input from faculty, and certainly not with input from the majority. ….This plan would create tiers, pitting schools against each other and rewarding those resource-rich schools with well-supported students while further punishing the ones that do not ‘perform’ as well according to metrics which, as we’ve already seen from the experiments in K-12, are arbitrary and quite contested.”

More on the Obama Plan

Enjoying White House Attention: For colleges and other organizations promoting alternative paths to degrees, the president’s speech was validation they have wanted.

Ratings Are Not So Easy: It’s hard to argue with President Obama’s analysis of higher education’s problems, writes Karen Gross, but his solution — a system for rating colleges — must be crafted very carefully.