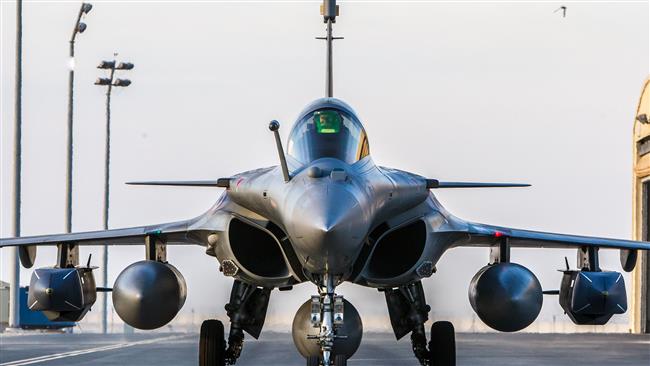 Above photo: This handout picture released on February 4, 2016 and taken on February 1 by the French Defense Audiovisual Communication and Production Unit (ECPAD) shows a Rafale fighter jet taxiing on an undisclosed base for a raid against ISIL as part of US-led forces. (AFP)

Note: President Obama presided over a rapid and dramatic expansion of US military operations around the world. US Special Ops are deployed in 135 of the 195 nations on earth. This is an 80% increase during the Obama years as commander-in-chief. Nick Turse reports that this expansion is expensive in personnel and funding:

“Special Operations Command’s funding, for example, has more than tripled from about $3 billion in 2001 to nearly $10 billion in 2014 “constant dollars,” according to the Government Accountability Office (GAO).  And this doesn’t include funding from the various service branches, which SOCOM estimates at around another $8 billion annually, or other undisclosed sums that the GAO was unable to track.  The average number of Special Operations forces deployed overseas has nearly tripled during these same years, while SOCOM more than doubled its personnel from about 33,000 in 2001 to nearly 70,000 now.”

The continent with the largest increase in these elite troops during the administration of the first African American president has been in Africa. The US is active in 20 African nations. Turse reports “In 2006, just 1% of commandos sent overseas were deployed in the U.S. Africa Command area of operations. In 2016, 17.26% of all U.S. Special Operations forces — Navy SEALs and Green Berets among them — deployed abroad were sent to Africa…” Obama who ran as a peace president at a time when opposition to the Iraq War was high, certainly does not have the record of a peace president.  KZ

The US Dropped More Than 26,000 Bombs on Muslim-Majority Countries in 2016

As President Obama enters the final weeks of his presidency, there will be ample assessments of his foreign military approach, which has focused on reducing U.S. ground combat troops (with the notable exception of the Afghanistan surge), supporting local security partners, and authorizing the expansive use of air power. Whether this strategy “works”—i.e. reduces the threat posed by extremists operating from those countries and improves overall security and governance on the ground—is highly contested. Yet, for better or worse, these are the central tenants of the Obama doctrine.

In President Obama’s last year in office, the United States dropped 26,171 bombs in seven countries. This estimate is undoubtedly low, considering reliable data is only available for airstrikes in Pakistan, Yemen, Somalia, and Libya, and a single “strike,” according to the Pentagon’s definition, can involve multiple bombs or munitions. In 2016, the United States dropped 3,027 more bombs—and in one more country, Libya—than in 2015.

To determine how many U.S. bombs were dropped on each Iraq and Syria, we looked at the percentage of total U.S. OIR airstrikes conducted in each country. They were nearly evenly split, with 49.8 percent (or 2,941 airstrikes) carried out in Iraq, and 50.2 percent (or 2,963 airstrikes) in Syria. Therefore, the number of bombs dropped were also nearly the same in the two countries (12,095 in Iraq; 12,192 in Syria). Last year, the United States conducted approximately 67 percent of airstrikes in Iraq in 2016, and 96 percent of those in Syria. 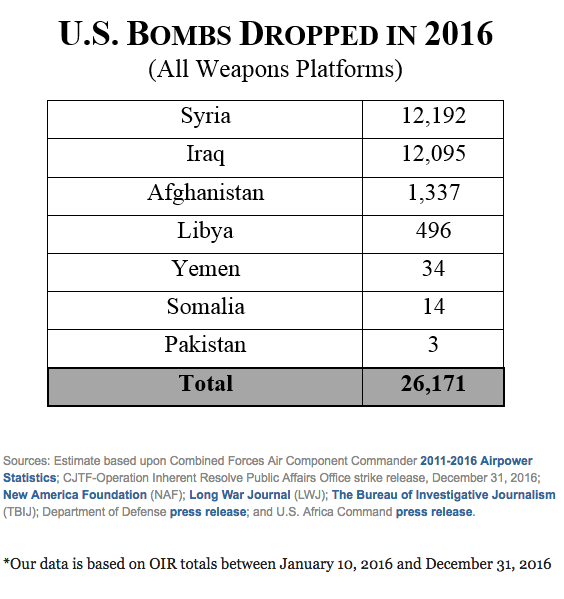