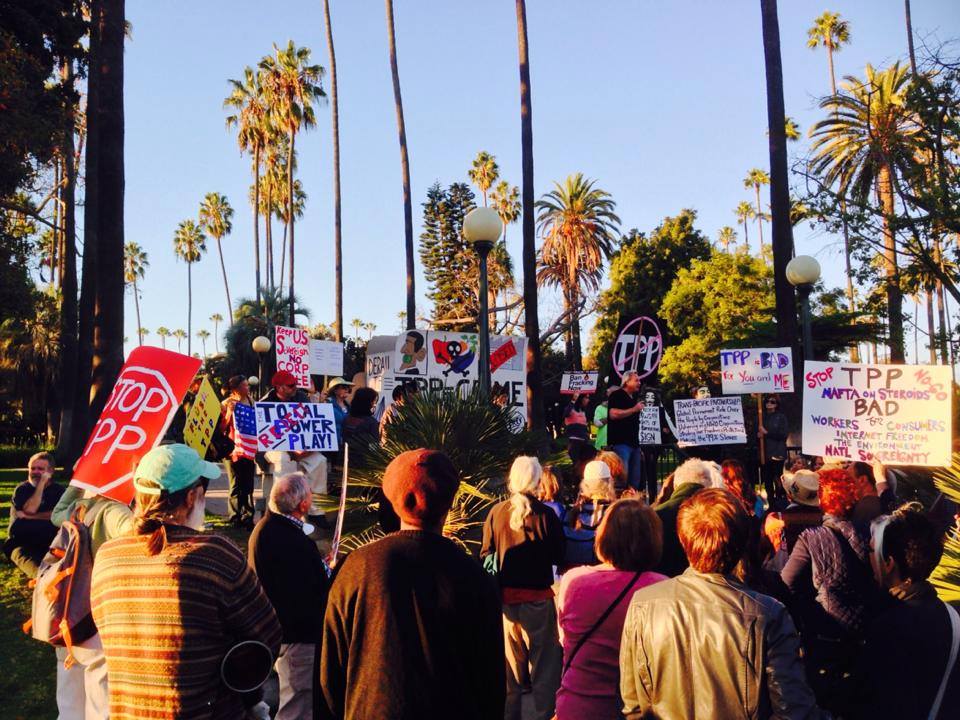 Obama, Pelosi And Reid Greeted By Anti-TPP Protesters In LA

Above: About 250 people greeted President Obama, Senator Reid and Representative Pelosi with protests against the TPP at a high donor fundraiser in Los Angeles.

The Trans-Pacific Partnership (#TPP), a global trade agreement being secretly negotiated by the US Trade Representative with 600 transnational corporations and industry trade groups, will affect nearly every aspect of Americans’ lives. If passed, it will undermine state, local and federal laws, including those governing food safety, environmental protection, internet freedom, worker rights, democratic sovereignty, healthcare and drug prices, and banking and finance regulation.

In short, it will be a disaster for public health and safety, future sustainability of the world’s food supply and basic democratic principles.

When asked why it was being negotiated in secret, Ron Kirk, the former US trade negotiator said, “Because if the people knew what was in it, it would never be passed.” It’s bad enough that Congress and the public have been shut out of these negotiations, while corporations are running the show. But even worse, the Obama Administration wants to ram the TPP through Congress using a Nixon-era process called Fast Track.

On November 25th, Barack Obama came to Beverly Hills for a high dollar fundraiser for the Democratic Senatorial and Congressional Campaign Committees at the Beverly Park homes of former basketball star Magic Johnson and billionaire media mogul Haim Saban. Tickets started at $2500 a person for the reception and $16,200 a person for the dinner.

250 protesters were there to greet Obama and tell him to flush the Trans-Pacific Partnership. Below is how the day and night went in pictures.

To join the campaign to stop the TPP and fast track visit www.FlushTheTPP.org.

Photo Gallery: The Democrats held a high dollar fundraiser in Beverly Hills on November 25th that was attended by the three Democratic leaders: President Obama, Senator Reid and Representative Pelosi — along with 250 people outside protesting the Trans-Pacific Partnership.