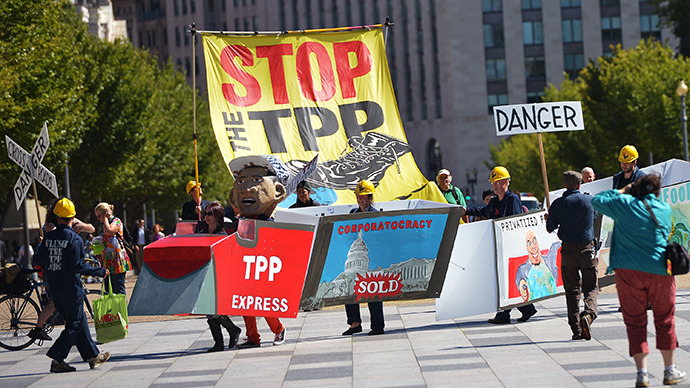 Above photo: By Ellen Davidson

NOTE: The Trans-Pacific Partnership is a very high priority for President Obama. He has been saying for a long time that he wants it completed this year. If the TPP is ratified, it will set our work for economic, racial and environmental justice and peace back decades. It is critical that we prevent Congress from ratifying the TPP. Please sign up for the No Lame Duck Uprising and join the resistance. There is something that each person can do. CLICK HERE FOR THE NO LAME DUCK UPRISING.

Washington, DC – The White House put Congress on notice Friday morning that it will be sending lawmakers a bill to implement President Barack Obama’s landmark Trans-Pacific Partnership agreement — a move intended to infuse new energy into efforts to ratify the flat-lining trade pact.

The move establishes a 30-day minimum before the administration can present the legislation, but the White House is unlikely to do so amid the heated rhetoric of a presidential campaign in which both major party nominees have depicted free trade deals as massive job killers.

Friday’s notification is the clearest signal yet that the White House is serious about getting Obama’s legacy trade deal — the biggest in U.S. history — passed by the end of the year, as he has vowed to do despite the misgivings of Republican leaders and the outright opposition of a majority of Democrats in Congress.

Striking a defiant tone, Obama predicted at a press conference last week that the economic centerpiece of his strategic pivot to Asia would pass in the lame-duck session, saying he’d like to sit down with lawmakers after the election to discuss the “actual facts” behind the deal, rather than toss it around like a “political football.”

“We are part of a global economy. We’re not reversing that,” Obama said, describing the necessity of international supply chains and the importance of the export sector to U.S. jobs and the economy. “The notion that we’re going to pull that up root and branch is unrealistic.”

The notification, a new requirement of the trade promotion authority legislation Congress passed last year to expedite passage of the Asia-Pacific pact, is “meant to ensure early consultations between the administration and Congress,” Matt McAlvanah, a spokesman for the Office of the U.S. Trade Representative, said in a statement. “As such, the draft SAA [Statement of Administrative Action] was sent today in order to continue to promote transparency and collaboration in the TPP process.”

The White House’s draft document describes the major steps the administration will take to implement any changes to U.S. law required by the deal. Those actions range from the mundane — designating an administration point of contact for communications about the pact — to the complex — setting up procedures to stop harmful surges of agricultural or textile imports.

But the deal is going nowhere until the White House addresses a number of concerns lawmakers have raised about the trade agreement, which Canada, Mexico, Japan and eight other countries joined the United States in signing last February.

First and foremost: satisfying the concerns of Senate Finance Committee Chairman Orrin Hatch (R-Utah) and other lawmakers about protections for a new class of drugs known as biologics. They say the pact provides too short a monopoly period for rights to research and development data. Other lawmakers have complained the deal would bar tobacco companies from seeking redress through investor-state dispute arbitrage for damages resulting from country regulations. Still others are seeking assurances that member countries will abide to their commitments to provide access for U.S. pork and dairy exports.

Until these issues are resolved, House Speaker Paul Ryan and Senate Majority Leader Mitch McConnell have made clear that the pact will not get the votes it needs to pass.

“As Speaker Ryan has stated for months, there are problems that remain with the administration’s TPP deal, and there can be no movement before these concerns are addressed,” she said.

Democrats, meanwhile, have largely called the deal a nonstarter over concerns about the enforceability of labor and environmental standards in countries like Vietnam and the lack of strong protections against currency manipulation.

The administration claims it is making progress on these issues and has resolved others, including banking industry concerns over the exclusion of financial data from rules prohibiting countries from requiring local storage.

But that doesn’t change the reality of the down-ballot drag that candidates are facing as they campaign back home in their districts. In a reversal from years past, many Republicans are on the defensive about their support for free trade because of Donald Trump’s daily tirades about what he characterizes as the serious economic damage wrought by trade agreements like the North American Free Trade Agreement and the TPP as well as his complaints that China is flouting international trade rules.

The Republican platform picked up on this theme, saying significant trade deals “should not be rushed or undertaken in a Lame Duck Congress.”

The small band of Democrats who the administration hopes will support the TPP are facing increased pressure within their own party to abandon the president on the agreement. Sens. Bernie Sanders’ and Elizabeth Warren’s strong condemnations of the trade deal have forced Hillary Clinton, who supported the TPP as Obama’s secretary of state, to reject the pact to appease the liberal wing.

“I will stop any trade deal that kills jobs or holds down wages, including the Trans-Pacific Partnership,” Clinton said during an economic policy speech at an automotive manufacturing plant in Warren, Mich., on Thursday. “I oppose it now, I’ll oppose it after the election and I’ll oppose it as president.”

Clinton’s clear rejection of the trade deal has emboldened liberal groups like the Warren-aligned Progressive Change Campaign Committee to launch a campaign to press Democrats to publicly oppose a TPP vote in the lame duck.

Sanders also called on Democratic congressional leaders to go on record against the White House’s effort to get the deal done by the end of the year, saying the agreement is opposed by every trade union and the grassroots base of the Democratic Party.

“I am disappointed by the president’s decision to continue pushing forward on the disastrous Trans-Pacific Partnership trade agreement that will cost American jobs, harm the environment, increase the cost of prescription drugs and threaten our ability to protect public health,” the Vermont senator said in a statement after learning of the White House’s action on Friday.

Meanwhile, the administration continues to press the deal in key congressional districts — especially those of Democrats who supported the trade promotion authority bill last year.

Interior Secretary Sally Jewell returned to her hometown of Seattle last month to tout the TPP’s potential effects on the environment at a Washington Council on International Trade event with more than 150 business leaders.

Then, last week, Commerce Secretary Penny Pritzker hit the San Diego and Boulder districts of Reps. Susan Davis and Jared Polis — two of the 28 House Democrats that voted for the bill — and visited a steel plant in Cleveland to promote the TPP. Treasury Secretary Jack Lew did the same when he met with local and state officials and Fortune 500 business executives in Minneapolis.

On Thursday, Undersecretary of Commerce for Oceans and Atmosphere Kathryn Sullivan spoke at a Seattle clean energy business roundtable focused on the TPP and the environment. And this Monday, Deputy U.S. Trade Representative Robert Holleyman will participate in a World Affairs Council of Atlanta discussion on the trade deal featuring former Republican Sen. Saxby Chambliss and UPS CEO David Abney.

As the political fight plays out, the nuts-and-bolts process of moving the deal forward will continue. Once Congress reviews the draft notification that the White House submitted on Friday, the administration can move forward with sending lawmakers a final statement and the draft of the implementing bill itself. The legislation will describe the actual changes to U.S. law to comply with the rules of the trade agreement.

After that, the Senate Finance and House Ways and Means committees could hold “mock markups” of the bill (because under trade promotion authority, Congress is not actually allowed to tinker with the agreement or its implementing legislation itself, but it can ask the administration to do so).

But given the tenor of the elections, the entire process could be pushed into a crowded lame-duck legislation session, which would mean no time for the mock markups. Instead, there could be a lot of deal-making between the White House and congressional leadership to move the bill before Clinton or Trump takes over on Jan. 20.

Obama said last week that he’s ready to press his case. “Right now, I’m president, and I’m for it. And I think I’ve got the better argument,” he said.