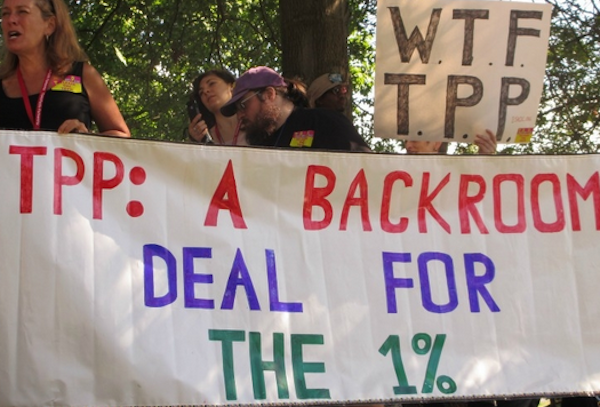 Obama Ready To Defy Base In Order To Advance TPP

“In a recent Pew poll, a mere 17 percent of the U.S. public thought that trade has boosted U.S. wages, while 45 percent, across the political spectrum, saw trade as contributing to falling wages for U.S. workers.” (Photo: Global Trade Watch/flickr/cc)

Note: Join our actions against the Trans Pacific Partnership this Sunday, December 7 and Monday, December 8th: TPP Talks Come To DC: Time To Release The Text.

President Barack Obama is ready to buck his liberal base in order to advance the Trans-Pacific Partnership (TPP), the pro-corporate international trade deal currently being negotiated in secret by the United States and 11 other Pacific Rim countries.

In a speech before the Business Roundtable, an association of conservative CEOs of major U.S. corporations, Obama indicated that he was ready to go head-to-head with Democrats, labor unions, and environmentalists—core groups that oppose the TPP and other so-called “free trade” pacts—in order to move the controversial deal forward. He listed trade as one of his top four economic priorities for the remainder of his presidency, along with tax reform, immigration, and investment in infrastructure.

“With respect to trade, we hope to be able to not simply finalize an agreement with the various parties in the Trans-Pacific Partnership, but also to be able to explain it to the public, and to engage in all the stakeholders and to publicly engage with the critics, because I think some of the criticism of what we’ve been doing on the Trans-Pacific Partnership is groups fighting the last war as opposed to looking forward,” Obama said, referring to trade deals such as NAFTA that have been strongly opposed by the same constituencies.

“Were the TPP to be Fast Tracked through Congress, all but the wealthiest among us would lose more to inequality increases than we would gain in cheaper goods, spelling a pay cut for 90 percent of U.S. workers.”
—Ben Beachy, Public Citizen

“Those who oppose these trade deals ironically are accepting a status quo that is more damaging to American workers,” he continued. “And I’m going to have to engage directly with our friends in labor and our environmental organizations and try to get from them why it is that they think that.”

U.S. Senator Orrin Hatch (R-Utah), who helped introduce ‘Fast Track’ legislation earlier this year that would hand over the power to negotiate trade agreements from Congress to the president, praised Obama’s remarks: “This is long overdue,” he said. “The president’s influence, particularly among members of his own party, will be a vital component to congressional efforts.”

Previewing the arguments he’ll make to Democrats and progressive leaders, Obama suggested that the TPP could have a positive effect on labor and environmental regulations both in the U.S. and abroad. “[I]f we are able to get Trans-Pacific Partnership done, then we’re actually forcing some countries to boost their labor standards, boost their environmental standards, boost transparency, reduce corruption, increase intellectual property protection,” he said.

But convincing his opponents of these alleged benefits will be an uphill battle.

“It’s a little bit insulting for him to say anybody who is not in agreement with a particularly flawed trade deal he put on the table wants to maintain the status quo,” Thea Lee, deputy chief of staff for the AFL-CIO, told the Washington Post.

Obama knew his audience—corporate representatives eager to expand the status quo trade model by Fast Tracking through Congress the controversial Trans-Pacific Partnership (TPP) are probably keen to deny that this model has been exacerbating inequality.

But such denial defies a consensus position among economists that recent trade flows have indeed contributed to today’s yawning gap between rich and poor— the only debate is how big of a role status quo trade has played.

It also defies U.S. public opinion—in a recent Pew poll, a mere 17 percent of the U.S. public thought that trade has boosted U.S. wages, while 45 percent, across the political spectrum, saw trade as contributing to falling wages for U.S. workers.

Obama acknowledged yesterday that TPP proponents will have a tough time arguing that this time is different—that reviving Fast Track authority in attempt to push through Congress another more-of-the-same trade pact would not fuel further inequality growth. Fast Track was the Nixon-created maneuver that allowed the executive branch to railroad through Congress controversial, inequality-spurring pacts like the North American Free Trade Agreement (NAFTA) by negotiating and signing the pacts before Congress got an expedited, no-amendments, limited-debate vote.  A study by the Center for Economic and Policy Research finds that were the TPP to be Fast Tracked through Congress, all but the wealthiest among us would lose more to inequality increases than we would gain in cheaper goods, spelling a pay cut for 90 percent of U.S. workers.

Next week, trade negotiators from throughout the Pacific Rim will gather in Washington, D.C. to continue closed-door talks on the TPP. They’ll be met by rallies on Sunday andMonday outside the Office of the U.S. Trade Representative, calling for increased transparency and rejection of Fast Track authority.