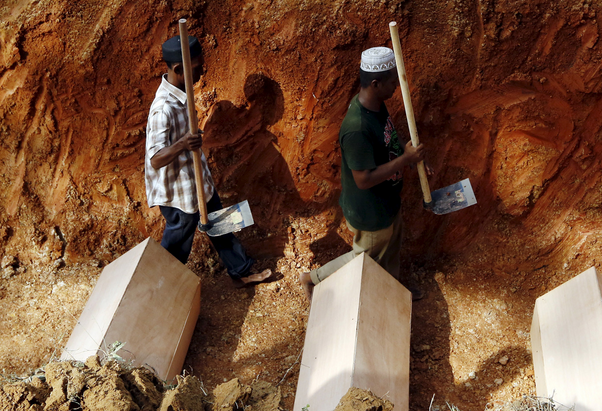 Workmen walk among coffins in a mass grave of unidentified Rohingya remains found at a traffickers camp in Malaysia. (Reuters/Olivia Harris)

When Congress finally passed fast-track trade authority last month, there was a major problem for President Obama and his trade negotiators: a provision of the bill forbid any fast-tracked trade deal from including countries on Tier 3 of the State Department’s human trafficking list.

That’s the worst classification the United States gives to countries in its Trafficking In Persons annual report, a status earned by countries like Zimbabwe, Syria, the Democratic Republic of Congo, and North Korea. Also on the list: Malaysia, one of the 12 potential signatories to the Trans-Pacific Partnership trade deal that is in the final round of negotiations this month.

Malaysia is home to many “outsourcing companies” that are, in reality, professional slaving operations: foreign workers, often refugees fleeing desperate situations in nearby countries like Burma, are recruited to the country with the promise of legitimate work but then subjected to forced labor and sex trafficking. The State Department and international human rights groups have routinely concluded the Malaysian government does very little to inhibit the traffickers’ operation.

Senator Robert Menendez inserted language into the Senate version of fast-track prohibiting the use of fast-track for a trade deal with a Tier 3 country, presumably with an eye on Malaysia. The Obama administration and Republican leaders in the House tried to have the language removed but were unable to excise it due to the complicated path the fast-track bill took through Congress.

Observers were then unsure what would happen next. Would Malaysia be thrown out of the deal? Would the United States lean hard on the Malaysian government to crack down on human traffickers so it could sign the trade deal? Was there any chance fast track would be disengaged for the TPP?

Instead, the Obama administration appears to have chosen another path that has shocked the human-rights community: It will simply reclassify Malaysia. Reuters hasreported that when the Trafficking in Persons report comes out next week, Malaysia will no longer be a Tier 3 country.

There is essentially zero evidence Malaysia has done anything to earn this reclassification. Just two months ago,police found 139 mass graves along the Malaysian border that contained migrant workers that had been trafficked or held for ransom.

Since the 2014 TIP report, Malaysia has actually convicted fewer smugglers. As recently as mid-April, the US ambassador to Malaysia publicly criticized the government there for not doing more to combat trafficking. One house of the Malaysian legislature did pass an anti-trafficking bill last month, but trafficking was already illegal—the problem has always been extremely lax enforcement, and there’s no sign that’s changed.

“They have done very little since being placed on Tier 3 to warrant an upgrade. This is not a controversial point,” said John Sifton, the Asia advocacy director for Human Rights Watch. “Nobody in the State Department could look at me with a straight face and lay out the steps Malaysia has taken that would warrant an upgrade to Tier 2.”

The Trafficking in Persons report has also been oddly delayed this year—it has been released in the month of June ever since 2002, but this year is already well past due. It presumably would have come out before fast-track passed, had it been on time. Menendez’s office said Friday that an interim report was delivered to the Senate Foreign Relations Committee in March on Tier 2 countries only, and Malaysia was not included.*

In combination with the lack of evidence that Malaysia warrants reclassification, the inexplicable delay of the report raises obvious questions about whether the change was purely political and geared toward keeping the TPP intact and on the fast track in Congress. “They appear to be giving Malaysia a sweetheart deal,” Menendez said.

Menendez told reporters Friday he will “consider any and all options” to get answers about whether the Trafficking in Persons report was politicized. Off the bat, Menendez will ask Senate Foreign Relations Committee chairman Bob Corker for a hearing on the matter if Malaysia is indeed reclassified. (Corker’s office did not immediately reply to a request for comment from The Nation).

If Corker doesn’t hold the hearing, Menendez said he would “consider” asking for an inspector general’s investigation into what happened during the TIP process.

“From everything I understand at this point, [Malaysia] has no reason to be raised,” Menendez said. “If that is true, that looks to me like a cynical maneuver to get around the clear intent of Congress with no regard for the effect on a key document, a key tool, in our country’s human-rights policy.”

Menendez added that he has sent a letter, signed by several Senate colleagues, to Secretary of State John Kerry expressing their “shock” at the decision to reclassify Malaysia. Menendez also called Kerry, and said he brought the issue up before US Trade Representative Michael Froman in a closed hearing earlier this week. (Menendez said Froman disclaimed responsibility for the TIP report but also pointed to the recently passed anti–trafficking law in Malaysia).

Outrage also came Thursday from Representative Rosa DeLauro, a leading fast track and TPP opponent in the House. “The only reason to upgrade Malaysia to a tier two country is to bypass the ban that is currently in U.S. law,” she said in a statement. “President Obama and Secretary Kerry must do the right thing and not arbitrarily upgrade Malaysia as a means to secure the TPP. This is an irresponsible, unacceptable political game.”

The broader concern, beyond a missed opportunity to use real leverage to get the Malaysian government to crack down on traffickers, is that the move suggests the administration isn’t serious about enforcing other areas of fast track and the TPP when it comes to other human-rights, environmental, or labor standards. Menendez raised this point Friday with reporters.

Human-rights advocates are meanwhile concerned the move would seriously devalue the Trafficking in Persons report. The move seemed to hit the human-rights community hard.

“I was shocked and I didn’t believe it. I didn’t think these things would happen,” said Human Rights Watch’s Sifton. “If it happened on House of Cards, I’d say ‘Oh, that’s not plausible.’”