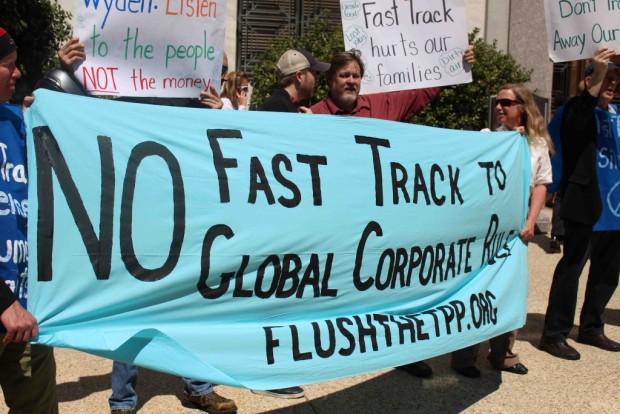 Note: President Obama has claimed that trade agreements do not change US law. Well, the World Trade Organization has proven him wrong in a ruling that requires the Untied States to change a law passed to protect the health of Americans by requiring labeling indicating the country of origin for meat imported into the US. Rather than calling opponents of the TPP and other corporate rigged trade agreements ignorant, President Obama may want to (1) read the TPP, (2) read the history of trade enforcement and (3) review the history of the US changing domestic laws to be consistent with trade agreements.  If Obama educates himself on these issues he will discover that the US is giving up its sovereignty to corporate-rigged trade agreements that puts corporations more in charge of our laws than the Congress, Courts and president.

And here, Bloomberg reports that Sen. Warren is also right on the issue of whether the TPP will undermine US banking regulation.  In this article we provide portions of a report by Sen. Warren’s staff that show Obama is wrong on the TPP having enforceable labor standards, a claim that has been made for every trade agreement since NAFTA in 2003 and been proven wrong every time.

WASHINGTON, D.C. — Today’s final ruling by the World Trade Organization (WTO) Appellate Body against popular U.S. country-of-origin meat labeling (COOL) policy spotlights how trade agreements can undermine domestic public interest policies, Public Citizen said today. The WTO decision is likely to further fuel opposition to Fast Track authority for controversial “trade” pacts that would expose U.S. consumer and environmental protections to more such challenges. (A list of some of the past public interest policies undermined by trade pacts is below.)

COOL requires labeling of pork and beef sold in the United States to inform consumers the country in which the animals were born, raised and slaughtered.

“The president says ‘we’re making stuff up,’ about trade deals undermining our consumer and environmental policies but today, we have the latest WTO ruling against a popular U.S. consumer policy. Last week, Canadian officials announced that our financial regulations violate trade rules, and earlier this year, the Obama administration, in response to another trade agreement ruling, opened all U.S. roads to Mexico-domiciled trucks that threaten highway safety and the environment, “said Lori Wallach, director of Public Citizen’s Global Trade Watch.

In a May 1, 2015, letter, Agriculture Secretary Tom Vilsack informed Congress that it will need to repeal the COOL law or else change it if the final WTO ruling were to go against the United States. In contrast, in his recent speech at Nike, President Barack Obama said, “Critics warn that parts of this deal would undermine American regulation – food safety, worker safety, even financial regulations. They’re making this stuff up. This is just not true. No trade agreement is going to force us to change our laws.”

“Today’s WTO ruling, which effectively orders the U.S. government to stop providing consumers basic information about where their food comes from, offers a clear example of why so many Americans and members of Congress oppose the Fast Tracking of more so-called ‘trade’ pacts that threaten commonsense consumer safeguards,” said Wallach. “The corporations lobbying to Fast Track the TPP must be groaning right now, as this ruling against a popular consumer protection in the name of ‘free trade’ spotlights exactly why there is unprecedented opposition to more of these deals.”

Today’s decision on the final U.S. appeal of a 2012 initial ruling against the COOL policy paves the way for Canada and Mexico, which challenged COOL at the WTO, to impose indefinite trade sanctions against the United States unless or until it weakens or eliminates COOL, which is supported by nine in 10 Americans. Last year, consumer groups wrote to the administration requesting it use the ongoing Trans-Pacific Partnership (TPP) negotiations as leverage to demand that Canada and Mexico drop the case instead of rolling back the policy. But they received no response.

Today, the WTO Appellate Body upheld a 2014 compliance panel ruling, which said that changes made in May 2013 to the original U.S. COOL policy, in an effort to make it comply with a 2012 WTO ruling against the law, were not acceptable. The Appellate Body decided that the modified U.S. COOL policy still constitutes a “technical barrier to trade.”It  decided that the strengthened COOL policy afforded less favorable treatment to cattle and hog imports from Canada and Mexico, despite a 53 percent increase in U.S. imports of cattle from Canada under the modified policy. The Appellate Body upheld the earlier panel ruling that the alleged difference in treatment did not “stem exclusively from legitimate regulatory distinctions.”

Today’s ruling is not subject to further appeal. The decision initiates a WTO process to determine the level of trade sanctions that Canada and Mexico are authorized to impose on the United States as retaliation for COOL.

Today’s ruling follows a string of recent WTO rulings against popular U.S. consumer and environmental policies. In May 2012, the WTO ruled against voluntary “dolphin-safe” tuna labels that, by allowing consumers to choose to buy tuna caught without dolphin-killing fishing practices, have helped to dramatically reduce dolphin deaths.

Changes made last year to comply with the WTO’s decision are now being challenged in WTO compliance proceedings. This comes after the U.S. revoked a long-standing ban on tuna caught using dolphin-deadly nets following an earlier WTO ruling. In January 2015, the Obama administration announced it would allow Mexico-domiciled long haul trucks on all U.S. highways after losing a North American Free Trade Agreement challenge and being threatened with sanctions on more than two billion in U.S. trade flows. Consumer groups warn that the trucks pose significant safety threats, while environmental groups warn that they do not meet U.S. emissions standards.

In response to previous WTO rulings, the United States has rolled back U.S. Clean Air Act regulations on gasoline cleanliness standards successfully challenged by Venezuela and Mexico; Endangered Species Act rules relating to shrimping techniques that kill sea turtles after a successful challenge by Malaysia and other nations; and altered auto fuel efficiency (Corporate Average Fuel Economy) standards that were successfully challenged by the European Union.

The Fast Tracked legislation that implemented the WTO enacted a patent extension sought by pharmaceutical interests that consumer groups had successfully defeated for decades. The Uruguay Round Agreements Act amended the U.S. patent law to provide a 20-year monopoly – replacing the 17-year term in U.S. law and increasing medicine prices by billions by extending the period during which generic competition would be prohibited. The bill also watered down the Federal Meat Inspection Act and the Poultry Products Inspection Act both of which  required only poultry and meat that actually met U.S. safety and inspection standards could be imported and sold here and allowed imports that meet “equivalent” standards with foreign nations certify their own plants for export.

The COOL policy was created when Congress enacted mandatory country-of-origin labeling for meat – supported by 92 percent of the U.S. public in a recent poll – in the 2008 farm bill. This occurred after 50 years of U.S. government experimentation with voluntary labeling and efforts by U.S. consumer groups to institute a mandatory program.

In their successful challenge of COOL at the WTO, Canada and Mexico claimed that the program violated WTO limits on what sorts of product-related “technical regulations” signatory countries are permitted to enact. The initial WTO ruling was issued in November 2011. Canada and Mexico demanded that the United States drop its mandatory labels in favor of a return to a voluntary program or standards set by an international food standards body in which numerous international food companies play a central role. Neither option would offer U.S. consumers the same level of information as the current labels. The United States appealed.

In a June 2012 ruling against COOL, the WTO Appellate Body sided with Mexico and Canada. The U.S. government responded to the final WTO ruling by altering the policy in a way that fixed the problems identified by the WTO tribunal. However, instead of watering down the popular program as Mexico and Canada sought, the U.S. Department of Agriculture responded with a rule change in May 2013 that strengthened the labeling regime. The new policy provided more country-of-origin information to consumers, which satisfied the issues raised in the WTO’s ruling. However, Mexico and Canada then challenged the new U.S. policy. With today’s ruling, the WTO has announced its support for the Mexican and Canadian contention that the U.S. law is still not consistent with the WTO rules.