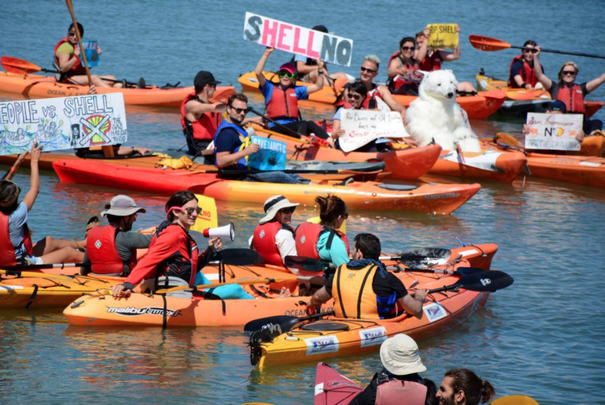 Obama’s Approval of Arctic Oil Drilling Is A Bitter Betrayal

The news came swift and sudden, though not unexpected: The Obama administration had approved Shell’s permits to drill for oil in the Arctic this summer.

It came like a punch in the gut. How could he?

Not only will this put Arctic wildlife directly in harm’s way of oil spill but it will push us deeper in the very climate crisis that President Obama has vowed time and again to finally address.

More than 1 million people had urged the president to keep oil drilling out of the Arctic. Just last weekend, thousands of people around the world took to the streets and their local waterways to say “Shell No” to drilling in the far north. (I even called on him prove his climate change rhetoric by denying Shell’s Arctic oil drilling permits this week in an open letter on Huffington Post.)

Obama didn’t just defy environmentalists around the world who have been calling for the Arctic to be kept off-limits to offshore drilling, he betrayed his own stated values and cast a dark shadow across the United States’ role as a world leader in transitioning the planet to the clean energy future it desperately needs.

By allowing Big Oil to drill into the largest untapped oil reserve on the planet, located in a harsh environment where a major oil spill is both likely and impossible to clean up, Obama has set a depressing and destructive example going into this fall’s climate change talks in Paris.

Yes, he claims to recognize and be working to address the “urgent and growing threat of a changing climate,” but his actions keep saying, “Drill baby drill!” At least the Republicans are somewhat honest about their intentions to suck up and burn every drop of oil they can, but Obama claims other values and goals.

That’s why this is such a bitter betrayal.

And it isn’t just about climate change. The Department of the Interior has already acknowledged there’s a 75 percent change of a major oil spill with this project, and that it will injure wildlife even without a spill. We only have to look at the delayed and deficient federal response to the recent oil spill near Santa Barbara to doubt the emergency response standards of the federal government, which regularly allows oil companies to self-regulate.

Former Vice President Al Gore, in an interview with the Guardian last week, offered a rare criticism of Obama for even considering the Shell project and allowing it to get this far, calling the idea “insane.” Beyond the undeniable climate change impacts, Gore emphasized the likelihood of a devastating oil spill, like BP’s 2010 disaster in the Gulf of Mexico.

“I think the Deepwater Horizon spill was warning enough. The conditions are so hostile for human activity there. I think it’s a mistake to drill for oil in the Arctic. I think that ought to be banned,” Gore said.

So do I, and so do leading environmentalists and climate scientists around the world. Obama’s decision to allow this project to move forward is a painful blow, but it’s one that will only increase my resolve to fight Big Oil with every means at our disposal.

This week, Obama made it clear that he’s not the ally we’d hoped he was in this fight, but there’s an army of us who will continue this struggle long after he’s gone.