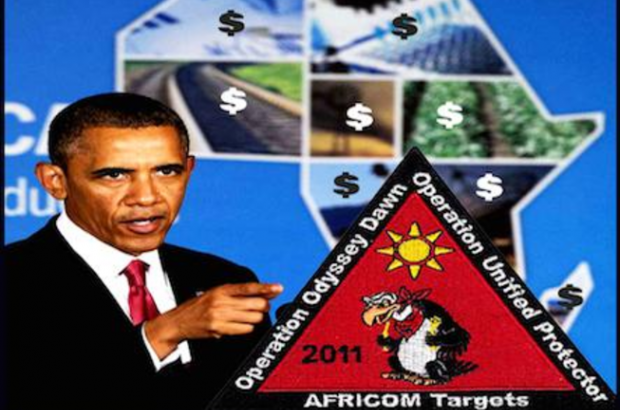 No American president has done more to destroy African independence than Barack Obama. “Within two years of his pledge to let Africans resolve their own problems, U.S.-NATO jets were dropping bombs on Libya in support of al-Qaida-linked terrorists who would topple and brutally assassinate Moammar Gadhafi.” Most African militaries are now subordinate to and dependent on the U.S. Pentagon.

“Obama’s war on Libya was the opening salvo of a continent-wide destabilization, the effects of which are still being felt today.”

The corporate media is predictably churning out nauseating retrospectives of Obama’s presidency, gently soothing Americans to sleep with fairy tales about the progressive accomplishments of President Hope and Change.

But amid the selective memory and doublethink which passes for sophisticated punditry within the controlled media matrix, let us not forget that in Africa the name Barack Obama is now synonymous with destabilization, death, and destruction.

The collective gasps of liberals grow to a deafening roar at the mere suggestion that Obama is more sinner than saint, but perhaps it would be useful to review the facts and the record rather than the carefully constructed mythos being shoehorned into history books under the broad heading of “Legacy.”

In the summer of 2009, little more than six months after being inaugurated, President Obama stood before the Ghanaian Parliament to deliver a speech intended to set the tone for his administration’s Africa policy. In addressing a crowd of hundreds in the Ghanaian capital, he was, in fact, speaking directly to millions of Africans all over the continent and throughout the diaspora. For if Obama represented Hope and Change for the people of the United States, that was doubly true for African people.

“We must start from the simple premise that Africa’s future is up to Africans … the West is not responsible for the destruction of the Zimbabwean economy over the last decade, or wars in which children are enlisted as combatants.”

Building prosperity, shedding corruption and tyranny, and taking on poverty and disease, he said
“can only be done if you take responsibility for your future. And it won’t be easy. It will take time and effort. There will be suffering and setbacks. But I can promise you this: America will be with you every step of the way, as a partner, as a friend.”

Despite being the First Black President™, Obama’s words and deeds with respect to Africa perfectly embody “the White Man’s Burden” — that desire to help those poor, lowly wretches whose poverty, corruption, disease, and violence must be the product of some natural deficiency. Surely, five centuries of colonialism, combined with Obama-style imperial arrogance, had nothing to do with it.

But let us take Obama’s words at face value and evaluate whether Obama was able to live up to those high-minded and idealistic goals throughout his two terms in office.

Obama repeatedly stressed African agency, arguing that the United States and the West cannot solve Africa’s problems for her. Instead, he argued that the United States will be a “partner” and a “friend.” And yet, within two years of the pledge to let Africans resolve their own problems, U.S.-NATO jets were dropping bombs on Libya in support of al-Qaida-linked terrorists who would topple and brutally assassinate Moammar Gadhafi, perhaps the single strongest voice for African independence and self-sufficiency.

“The war on Libya opened the floodgates for weapons smuggling, terrorism and destabilization all over the African continent.”

Considering the tens of thousands of deaths and the utter destruction and dissolution of Libya into warring tribal militias and multiple fragmented governments barely able to be called legitimate, it is particularly galling that Obama stood before the United Nations and declared the U.S.-NATO war on Libya to be a success. Exactly one month before Gadhafi’s heinous torture and assassination, Obama arrogantly stated on Sept. 20, 2011:

“This is how the international community should work in the 21st century — more nations bearing the responsibility and the costs of meeting global challenges. In fact, this is the very purpose of this United Nations. So every nation represented here today can take pride in the innocent lives we saved and in helping Libyans reclaim their country. It was the right thing to do.”

Yes, the very same president who two years earlier proclaimed that “Africa’s future is up to Africans” was a champion of French, British, Italian, and U.S. military forces imposing their will on a prosperous and independent African nation, transforming it into a chaotic and bloody failed state. So much for Hope and Change.

But of course the tragic story of Libya does not stop with just the destruction of the Libyan Arab Jamahiriya and the assassination of Gadhafi. Rather, the war on Libya opened the floodgates for weapons smuggling, terrorism and destabilization all over the African continent. According to a 2013 report by the U.N. Security Council’s Group of Experts:

“Cases, both proven and under investigation, of illicit transfers from Libya in violation of the embargo cover more than 12 countries and include heavy and light weapons, including man-portable air defense systems, small arms and related ammunition and explosives and mines.”

The report continued, warning that “illicit flows from the country are fueling [sic] existing conflicts in Africa and the Levant and enriching the arsenals of a range of non-State actors, including terrorist groups.”

“The proliferation of weapons from Libya continues at an alarming rate.”

Indeed, those weapons flowing from Libya have directly fueled the civil war in Mali, facilitated the rise of Boko Haram in Nigeria, empowered the terror group al-Qaida in the Islamic Maghreb, and led to the rise of terrorist gangs and death squads in Burkina Faso, Central African Republic, and elsewhere on the continent. In effect, Obama’s war on Libya was the opening salvo of a continent-wide destabilization, the effects of which are still being felt today and likely will continue to be felt for years, if not decades, to come.

With these troubling facts in mind, we return to Obama’s speech in Ghana, where he haughtily pronounced that the West is not responsible for Africa’s problems. Naturally, any student of colonialism and African history would immediately object to such selective memory. One wonders whether decades from now, when the legacy of the wars and terrorism that grew out of Obama’s policies is still being felt, another president will stand before Africa and again chastise her for not solving her own problems.

“In many instances, these partnerships involve African militaries ceding operational command to AFRICOM.”

Were Obama’s crimes against peace in Africa limited only to the war on Libya and its effects, one could simply call it a blunder of historical proportions. But Obama had much more blood to spill in Africa while expanding the U.S. military footprint there.

Primary among these initiatives to grow the U.S. military presence in Africa was the expansion of the U.S. Africa Command, or AFRICOM. In June of 2013, Ebrahim Shabbir Deen of the Johannesburg-based Afro-Middle East Centre noted:

“[AFRICOM] has surreptitiously managed to infuse itself into various African militaries. This has been accomplished mainly through military-to-military partnerships which the command has with fifty-one of Africa’s fifty-five states. In many instances, these partnerships involve African militaries ceding operational command to AFRICOM.”

In fact, while President George W. Bush was responsible for the establishment of AFRICOM, it was Obama who expanded it into a continental military force into which national military forces have been subsumed. In effect, Obama was able to make African nations, and especially their militaries, into wholly-owned subsidiaries of the Pentagon and U.S. military-industrial complex. But it’s ok, Obama did it with a smile and with the credibility of the “native son” of the continent.

Similarly, Obama is directly responsible for the ongoing bloodshed in South Sudan, where he championed the separatism which led to the creation of that country and the predictable civil war which has followed. Obama declared in 2011 upon the formal independence of South Sudan that: “Today is a reminder that after the darkness of war, the light of a new dawn is possible. A proud flag flies over Juba and the map of the world has been redrawn.” But Obama may have spoken too soon, as the darkness of war drags on in the devastated country where a “new dawn” seems about as likely as Obama admitting his failure.

And while Obama, as usual, waxed poetic about independence and freedom, the reality is that his backing of South Sudan was more about gaining a geopolitical advantage against China than about high-minded ideals.

Similarly, Obama used the expanded capabilities of U.S. military and CIA in Africa to greatly increase the Pentagon and Langley’s presence in Somalia. As Jeremy Scahill reported in The Nation in December of 2014:

“The CIA runs a counterterrorism training program for Somali intelligence agents and operatives aimed at building an indigenous strike force capable of snatch operations and targeted ‘combat’ operations against members of Al Shabab, an Islamic militant group with close ties to Al Qaeda.

As part of its expanding counterterrorism program in Somalia, the CIA also uses a secret prison buried in the basement of Somalia’s National Security Agency (NSA) headquarters … Some of the prisoners have been snatched off the streets of Kenya and rendered by plane to Mogadishu.”

“In effect, Obama was able to make African nations, and especially their militaries, into wholly-owned subsidiaries of the Pentagon and U.S. military-industrial complex.”

It should be noted that the policies — the crimes against peace — highlighted here represent only a fraction of the eight years of Obama policies on the continent; a complete accounting of Obama’s crimes against Africa would likely require a book-length analysis. The intent here is to illustrate that the man who stood before Africa professing to be a friend was as much friend to Africa as the hangman is to the condemned.

Were it someone other than the first black president, perhaps there might have been an outcry at the rape and plunder of the continent, the militarization and destabilization of Africa. And yet, throughout the past eight years, there has been a deafening silence from liberals whose ideals and values apparently extend only as far as party loyalty allows.

In a beautifully precise term coined by Glen Ford, executive editor of Black Agenda Report, Obama represented not the lesser, but “the more effective,” evil. And when it came to Africa, that was doubly true. Who but Obama could have destroyed nations, fomented terrorism, plundered the wealth, and militarized and destabilized the entire continent all while flashing a hypnotic grin?

For the African people, however, Obama’s perfect teeth and intoxicating smile hide a forked tongue. And as for Obama’s Africa “legacy,” it can be found in the graveyards of Libya, Nigeria, and beyond.