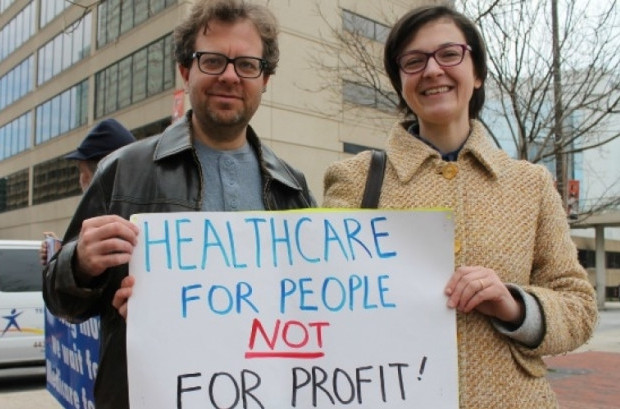 Above Photo: “Stock-heavy pay drives CEOs to do the exact opposite of their buzzword-laden goals of creating a ‘patient-centered’ health system that focuses on ‘value,'” writes Axios’s Bob Herman. (Photo: Elvert Barnes/Flickr/cc)

While the Senate GOP’s plan to repeal the Affordable Care Act (ACA) has been denounced as potentially devastating to the poor, the sick, women, people of color, children, and those with pre-existing conditions, a new analysis published Monday finds that no matter what happens, the CEOs of large healthcare companies are likely to continue living lavishly.

“The median household income in 2015 was $56,515, which the average healthcare CEO made in less than a day.”
—Bob Herman, Axios

Since the Affordable Care Act (ACA) passed in 2010, the “CEOs of 70 of the largest U.S. healthcare companies cumulatively have earned $9.8 billion,” according to a report by Axios‘s Bob Herman.

Herman goes on to add that the CEOs’ earnings “far outstrip[ped] the wage growth of nearly all Americans.”

CEOs of 70 of the largest US health care companies have earned $9.8 billion in the seven years since ACA was passed https://t.co/1VBAavfiWZ pic.twitter.com/aeXbUmtW4j

Despite President Donald Trump’s repeated insistence that Obamacare has been a “nightmare” and that the entire system is collapsing, Herman observes, “The ACA has not hurt the healthcare industry. Stock prices have boomed, and CEOs took home nearly 11 percent more money on average every year since 2010.” And the Senate GOP’s alternative, which Trump has enthusiastically endorsed, would likely be a further boon to industry executives, who would stand to benefit from the bill’s massive tax cuts for the wealthy.

Perhaps the most consequential component of healthcare CEO pay, Herman observes, is the fact that “a gigantic portion of what CEOs make comes in the form of vested stock, and those incentives drive their decision-making.”

This means that CEOs are incentivized not to take actions that would benefit the healthcare system overall, but rather to “inflate stock prices” using methods “such as repurchasing shares or issuing dividends to shareholders.”

Such moves lead to higher salaries for CEOs, but not to widely shared benefits.

“Stock-heavy pay,” Herman concludes, “drives CEOs to do the exact opposite of their buzzword-laden goals of creating a ‘patient-centered’ health system that focuses on ‘value.'”

Some commentators portrayed the analysis as both indicative of the fundamental injustice at the heart of the for-profit insurance model and proof of the need for Medicare for All.

The central healthcare initiative of the Dem Party is a policy that effectively subsidizes the pay of these execs https://t.co/briYBbU5EG

But how could we possibly afford a Medicare for all system? https://t.co/jynH0yollk pic.twitter.com/rIY8mRSlAa