In 2011, just after Occupy, we published the research of Thomas Piketty, Emmanuel Saez, and Stefanie Stantcheva on our economic project, which determined that the top tax rate for high-income earners should be 83 percent and it should be put in place while closing tax loopholes. They pointed out:

“at the very top of the income ladder, pay increases reflected mostly greed mostly greed or other socially wasteful activities rather than productive work effort. This is why they were able to set marginal tax rates as high as 80 percent in the US and the UK. The Reagan/Thatcher revolution has succeeded in making such top tax rate levels unthinkable since then. But after decades of increasing income concentration that has brought about mediocre growth since the 1970s and a Great Recession triggered by financial sector excesses, a rethinking of the Reagan and Thatcher revolutions is perhaps underway.”

In 2012, when Barack Obama and Mitt Romney were running for president, tax rates were an issue between them. The Congressional Research Service issued a report that also sides with Ocasio-Cortez’s call for a high tax on those earning more than $1 million. The report concluded that tax cuts for the rich don’t seem to be associated with economic growth and instead are linked to a different outcome: greater income inequality in the US. They found:

The top income tax rates have changed considerable since the end of World War II. In 1945, the richest families had to pay a marginal tax rate of more than 90 percent. Today, it is 35 percent. But both real GDP and real per capita GDP were growing more than twice as fast in the 1950s as in the 2000s. 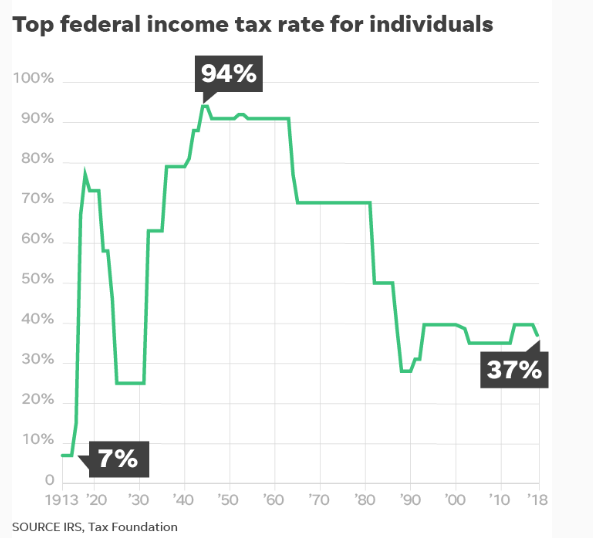 As the chart below shows income inequality coincides with the reduction of progressive taxation. 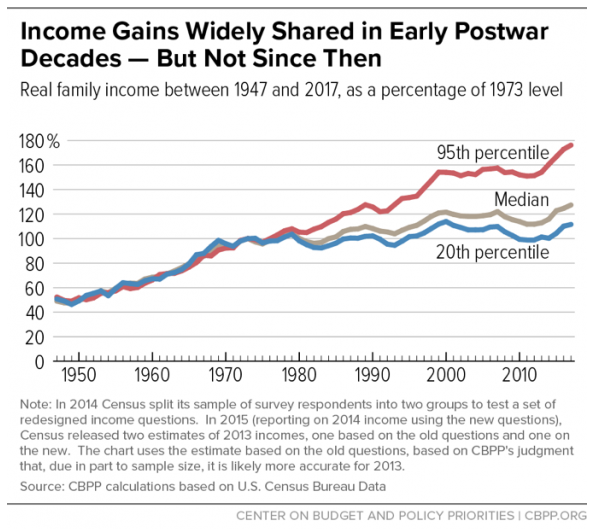 Ocasio-Cortez’s proposal should be taken seriously as the US has great spending needs. These include renewing and replacing failing infrastructure, transitioning to a clean energy economy, investment in new forms of transportation, ending poverty and homelessness, investing in neglected cities and rural communities and much more.  While the two parties have been willing to go into debt to fund wars and tax cuts for the rich, and Modern Monetary Theory argues we do not need taxes to pay for these programs based on having a fiat currency and the size of our economy, traditional economics shows we could fund the needs of the country and reduce the income divide by putting a progressive tax system back in place.

The United States has been going in the wrong direction on taxes since the Reagan era causing a record wealth divide where now three people — Jeff Bezos, Warren Buffett, and Bill Gates — have the wealth equal to half the population, more than 160 million people. This is inequitable and unjust and results in the country not funding much-needed programs.