Occupied Palestine: From BDS To ODS

We spent the last week in Occupied Palestinian Territory, commonly referred to as Israel, where we traveled around the country to visit communities in Jerusalem, Jaffa, Bethlehem, the West Bank, the Nagab, and more.

We call Israel Occupied Palestine because it is not just the West Bank and Gaza that are occupied, but all of historic Palestine, the entire Palestinian nation. Palestinian people do not have equal rights and their communities are constantly encroached upon by settlers pushing them into small, crowded areas. The mistreatment of Palestinians happens right before the eyes of the Israeli Jews. If they do not see it, it is either because they do not want to see it or because they are encouraged not to see it. Just as Jim Crow racism was evident to all in the southern states of the US, apartheid in Palestine is obvious.

This visit deepened our support for the Boycott, Divestment, and Sanctions (BDS) movement because we saw modern apartheid, Jim Crow-segregation laws, ongoing land theft, and ethnic cleansing. For example, we were in Jerusalem when a squadron of fighter jets flew over our heads to bomb the open-air prison of Gaza killing more than 30 people. The Israeli people, media and politicians applauded that, displaying a sickness that runs deep in this colonized land founded on theft, terrorism, and violence.

To end the colonization, there is great hope of developing a movement for the creation of One Democratic State (ODS). This is being organized by a large group of Palestinians and Jews as the formation of two separate states is impossible. ODS envisions a universally equal and democratic nation where minority communities are protected and every person can vote. ODS is the first step to the decolonization and healing of Palestine. 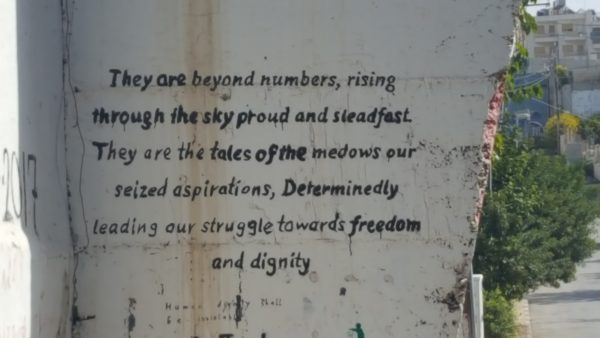 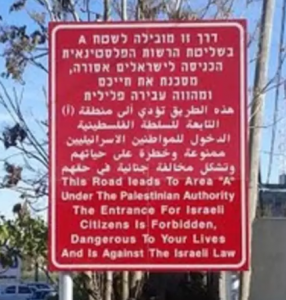 Palestine has hyper-segregation: Palestine can only be described as a modern apartheid state with updated Jim Crow laws. We drove on Jewish-only roads where the color of a person’s license plate determines if they can use the road. There are military checkpoints along these roads. Palestinians are often forced to take long detours to get around the segregated roads and walls. Many Jews never meet a Palestinian because their lives are so segregated.

Under the 1993 Oslo Accords, Occupied Palestine was divided into Areas A, B and C. We visited Bethlehem, classified as Area A, where a sign upon entry warns it is against the law for Israeli-citizens to enter. In Area A, the Palestinian Authority (PA) serves as police and can arrest Israeli-Jews and turn them over to Israeli-police. In Area B, both the PA and Israeli-police have power. And, in Area C, the majority of the country, only the Israeli-police have authority.

Land Theft Against Palestinians Continues: People are often told that no one lived here before 1948 when the occupation of the area by Jewish settlers began. This massive land theft continues today. Although the German Holocaust is used to justify this, the Zionist project began well before then. 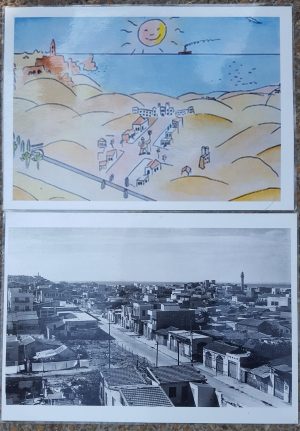 Jaffa, above as depicted by Gutman and below as the crowded Arab city that actually existed. Photo by Margaret Flowers.

This false picture is depicted by the well-known Zionist artist Nahum Gutman. His famous painting of the major Arab city of Jaffa showed only sand dunes and a few buildings where hundreds of houses stood.  Today Sir Charles Clore Park covers the remains of this section of the city. Similar tactics have hidden thousands of Palestinian villages that existed before “The Nakba” in 1948.

Forests planted by the Jewish National Fund (JNF), founded in 1901, are still being used to hide the sites of Palestinian villages. We visited the village of Al-Araqib, which has been destroyed 167 times. All that remains is a cemetery built in 1914 and a few residents who hold space under a tree near the cemetery in fear of losing access to it. In Canada, there is a campaign to end the non-profit status of the JNF.

Jaffa was an important Arab port city with a population of 90,000 before 1948 that served as an entry point into Jerusalem and beyond. The first Jewish neighborhoods were built there in the late 19th Century. Tel Aviv, the first Jewish-governed city, began in the early 20th century as a suburb of Jaffa. More than ninety-five percent of the population of Jaffa was expelled by Zionist militias in 1948 and beyond. The remaining residents were confined to an area under guard and forced to operate the port. Between 1947 and 1949, the Nakba terrorized Palestinians and forced 800,000 to flee their homes. The Absentee Property Law was used to seize the homes of those who fled.

Zionist settlers continue encroaching on land in Palestinian neighborhoods. In the historic walled city of Old Jerusalem, they come up from underground tunnels to seize homes in the Palestinian quadrant and put them under armed guards. In Palestinian East Jerusalem, Zionists continue to confiscate houses and land, pushing Palestinians to the other side of the segregation wall where they are crowded into areas without city services. Similar forced urbanization and crowding is occurring throughout Palestine. Gaza is perhaps the most severe example of this. Over the last 50 years, the Israeli government has transferred between 600,000 and 750,000 settlers to the West Bank and East Jerusalem in at least 160 settlements and outposts.

In the West Bank, Jerusalem, and Gaza, this land annexation has made a two-state solution physically impossible. The combination of hundreds of thousands of settlers, Jewish-only roads plus the Expansion (or Annexation) Wall that divides Palestinian communities, and more than 200 checkpoints have severely restricted movement for Palestinians and seized 78% of their country. 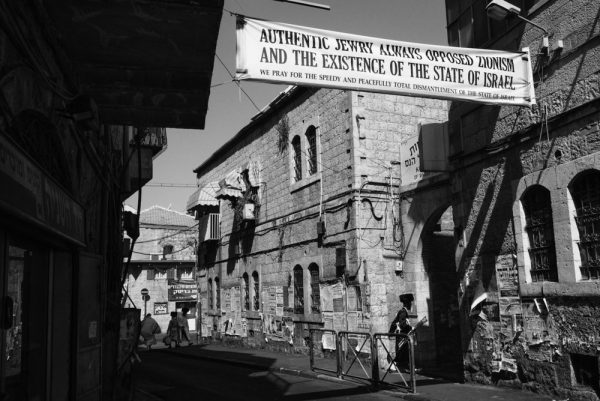 A banner hanging in Mea Shearim, a Jewish neighborhood in Jerusalem.

Judaism is not Zionism: In the 1880s, Palestinian Jews amounted to three percent of the total population. They were apolitical and did not aspire to build a Jewish state. We met with Rabbi Meir Hirsch in the Mea Sharim neighborhood of Jerusalem. This tightly-knit ultra-Orthodox Jewish neighborhood has signs posted on the walls that say: ‘A Jew Not a Zionist,’ ‘Zionism is Dying’ and ‘Arabs are Good.’

Hirsch’s family came to Palestine 150 years ago from Russia. His people came to better worship God, not to take land from Palestinians. Hirsch told us about Jacob Israël de Haan, a Dutch-Jew who worked to prevent the 1917 Balfour Declaration and almost succeeded. The Balfour Declaration, issued by the British government, announced support for the establishment of a “national home for the Jewish people” in Palestine. De Haan was assassinated in Jerusalem by the Jewish paramilitary organization Haganah for his anti-Zionist political activities. His murder led to the Neturei Karta movement, which resists Zionism to this day.

Hirsch views Zionism as contradictory to the Jewish religion. His community believes the Torah does not allow Jewish sovereignty of any kind over the Holy Land and those who want to live there must have the approval of the native Palestinian people. Hirsch says that ultra-Orthodox Jews “want to see the end of the Zionist tragedy and the restoration of peace to the Middle East.” His views counter those who claim criticism of Israel is anti-Semitic as, he says, “Judaism and Zionism are as foreign to each other as day and night, good and evil.” 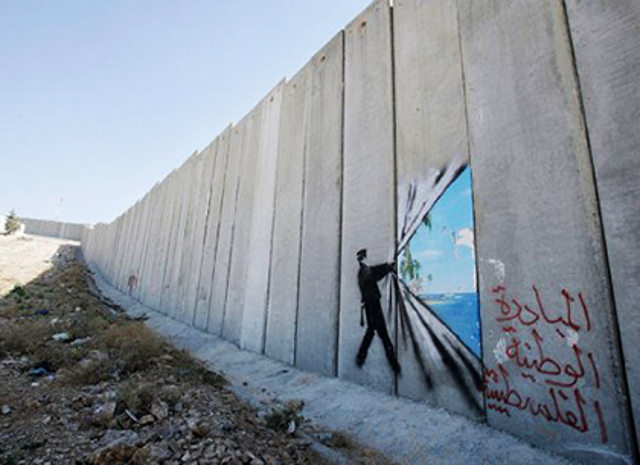 Graffiti made by the graffiti artist Banksy is seen on Israel’s Separation Wall in Abu Dis on August 6, 2005. (Photo by Marco Di Lauro/Getty Images)

There is a positive path to resolving the conflict between Jews and Palestinians. The path comes from the movement for One Democratic State, which envisions a genuinely just and workable political agreement developed by Palestinians and Jews together.

We met separately with two leaders of this campaign, Awad Abdelfattah, a founder of the Arab Balad Party, and Ilan Pappe, an Israeli historian. Along with many others in the ODS campaign, they seek a multicultural and constitutional democracy in which all people enjoy a common citizenship, a common parliament, and equal civil rights, with constitutional protection granted to national, ethnic and religious views. ODS means equal rights for Palestinians and protection of the rights of Jews.

Their vision includes making the Palestinian ‘right of return’ a reality. Palestinian homes and communities were demolished years ago. According to the Palestinian geographer Salman Abu-Sitta, 85% of Palestinian lands taken in 1948 are still available for resettlement. While more than 530 villages, towns, and urban areas were systematically demolished, their agricultural lands still exist. Other lands lie under public parks and forests. Refugees could actually return, if not to their former homes, at least to the parts of the country where they originated. Palestinian planners could design modern communities for refugees and their descendants in the areas they left with new communities and economic infrastructure that is integrated with other segments of the society. Land redistribution, financial compensation, and equal access to education, training and the economy would enable refugees, like other Palestinians, to achieve economic parity with Jews within a fairly short time.

For Jews, their security will increase by providing constitutional protection of their collective rights. While structures of privilege and domination would be dismantled, the “collective rights” of groups to maintain their community in the framework of a multi-cultural democracy (e.g., communities of ethnic Russians, African asylum-seekers, foreign workers, anti-Zionist ultra-orthodox Jews, and others) give Jews the collective security they need.

ODS views the establishment of a just and working state as requiring: decolonization, restoration, and reconciliation. Decolonization includes ending economic, cultural, political, and legal domination. This means building an egalitarian, inclusive and sustainable society that restores the rights, properties (actual or through compensation), identities and social position of those expelled, excluded and oppressed. This is followed by reconciliation to confront the still-open wounds of the Nakba and the Occupation, and the suffering they have caused.

While the view may sound Utopian to some, in fact, it is the practical path out of the current disaster of Occupied Palestine. Palestine is already one nation. The issue is whether it will be a democratic state with equal rights for all citizens that dismantles the apartheid system or whether it will remain an undemocratic and unequal settler-colonial nation.

We titled this article “BDS to ODS” because while this solution must come from the Palestinian people, along with Jews, people in the United States and throughout the world who support peace and justice have an important role to play through the growing BDS campaign to pressure Israel into accepting ODS. This struggle will be won through solidarity between popular movements inside and outside Occupied Palestine.

We encourage you to visit Occupied Palestine to see and learn for yourself. If you visit Jerusalem, be sure to take the tour offered by Grassroots Jerusalem. They also offer a guide to Palestinian places to stay, shop and eat. Zochrot is an organization that also offers tours and resources about the Nakba. If you are interested in direct service, you can volunteer to assist with the olive harvest or volunteer in places such as the Aida Refugee Camp. They need all sorts of volunteers, especially those who can provide instruction to children in music and arts. Visit Volunteer Palestine to see the many opportunities available.