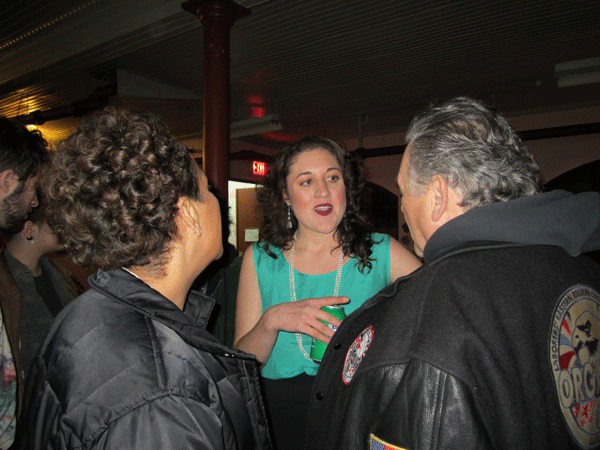 In a potential blow to the case of Occupy Wall Street protester Cecily McMillan, State Supreme Court Justice Ronald Zweibel last week refused to allow review of the personnel file of Grantley Bovell, the officer involved in her arrest.

The 25-year-old New School graduate student is charged with felony assault of a police officer, stemming from the six-month anniversary of the O.W.S. protests in Zuccotti Park. If convicted in a trial scheduled for April 7, McMillan could face up to seven years in prison.

Photos following her arrest indicate she was severely bruised, including above her right breast.

Speaking on March 17, Attorney Martin Stolar, of the National Lawyers Guild’s New York City chapter, who is representing McMillan, said that Officer Bovell grabbed McMillan’s right breast from behind, and that, in response, McMillan threw up her elbow, hitting his cheekbone.

Stolar said McMillan was only reacting to being groped, and never intentionally tried to injure Bovell. She did not even realize it was an officer behind her, thus could not have been trying to prevent him from performing his duties, the attorney said. Other officers joined the arrest, leading to what Stolar described as McMillan’s being knocked to the ground, beaten, then suffering seizure-like conditions, memory loss and post-traumatic stress disorder.

“It was total over-policing, the use of brute force,” Stolar said. “And that is really a hallmark of how police reacted with most Occupy Wall Street demonstrations, gatherings and protests.” N.L.G. New York City chapter’s Web site shows a different policeman grabbing another female protester’s breasts.)

For their part, police say McMillan intentionally elbowed Bovell in the face.

Bovell was internally disciplined in the Bronx ticket-fixing scandal.

In another case, a 2011 civil lawsuit by Reginald Wakefield named Bovell as a passenger in an unmarked police car that intentionally drove into Wakefield, who was riding a dirt bike. That case settled, but Bovell was disciplined for failing to report the chase over the police radio. Bovell was also accused of kicking or beating two arrestees.

Citing these four incidents, Stolar requested review of Bovell’s Police Department Internal Affairs Bureau personnel files to shed light upon his interaction with McMillan and the truth of the officer’s testimony. On March 19, the judge ruled Bovell’s personnel records were not relevant to McMillan’s case. However, Stolar plans to use these incidents to question the officer’s credibility at trial.

On March 1, McMillan’s supporters hosted a party at the Church of St. Luke and St. Matthew in Brooklyn. A poster for the event read, “We won’t be silenced by their violence.” Messages on colorful, paper cutouts of police badges surrounded the sign.

“I think, as the healing wall shows, when we asked people to share their police brutality stories, this was not an isolated incident that happened to me alone,” McMillan said. “We decided to have an event as a show of solidarity. This party was a celebration of standing together.”

Stan Williams, one of the organizers of the party, works with McMillan in union organizing. For Williams, the evening was less about raising funds than focusing on encouraging the “99 percent” to continue its movement, to get to know one another, support ideas and build a community.

Handwritten donation signs asking for $2 or $3 contrasted with media reports that, in 2010, JPMorgan Chase donated $4.6 million to the New York City Police Foundation. Some people at the party questioned the contribution: Were police at Zuccotti Park acting to protect the people — or rather as Wall Street’s security detail, motivated to shut down and discourage the protests? A JPMorgan Chase spokeswoman declined to comment for this article.

Drew Mitchell said the case is about an innocent person, wrongly charged. In the context of the Occupy Wall Street protests, he hopes McMillan’s trial also highlights the First Amendment right of ordinary people to peacefully petition the government, and to assemble without fear of police brutality or criminal charges.

Williams said McMillan turned down the prosecutor’s offer to plead guilty to a felony and receive probation.

“A felony for being groped by a police officer?” he said. “No way.”