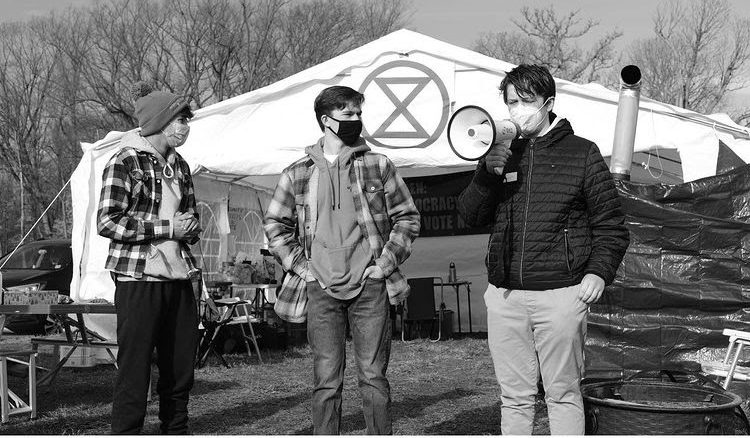 This week, environmental advocates addressed intensifying fossil fuel pollution, climate injustices, and the Biden administration’s failure to take the lead on climate crisis solutions during the Occupy Biden protests near Joe Biden’s Wilmington, DE home. Their goal remains to increase the pressure on the President to declare a climate emergency and end new fossil fuel projects. The actions are being led by local community leaders and supported by dozens of environmental and social justice groups from around the country, and have resulted in hundreds of people taking action. The Occupy Biden actions began on Christmas Day, December 25, and will culminate in a rally and march at 1 pm. New Year’s Day, January 1.

“The President has the power to declare a climate emergency, but has not done so. The President knows that we are occupying land right outside his home, but he hasn’t addressed us or our demands. The democrats control the House, Senate, and White House, they have the power to enact sweeping change to protect our earth and our futures, but they haven’t. I stand in solidarity with this multigenerational working class movement for environmental justice because this inaction by lawmakers is inexcusable.”  – Echo Alford, Member of the Party for Socialism and Liberation, Delaware County, PA resident

Our youth are scared, angry, and smart. They know we could do better and they demand that we do so now. If our government does not do all in their power to stop our climate emergency then, I believe, they are committing genocide on our grandchildren. The scientists have stated our dire situation. The IEA has stated it. And Build Back Fossil Free has a Biden Executive Blue Print that he could be following, but is not.  – Karen Igou lead organizer Occupy Biden, small business owner, founder Extinction Rebellion Delaware

“I am here, all day and all night, from Christmas morning to New Year’s Day, sleeping in a car, because of what our President said is a worldwide, “code red” emergency situation. When it’s “code red” you do things you’ve never done before. I and others here are doing that. President Biden must too, using the powers he was elected to use.”  – Ted Glick, lifelong elder activist, teacher, author. Beyond Extreme Energy