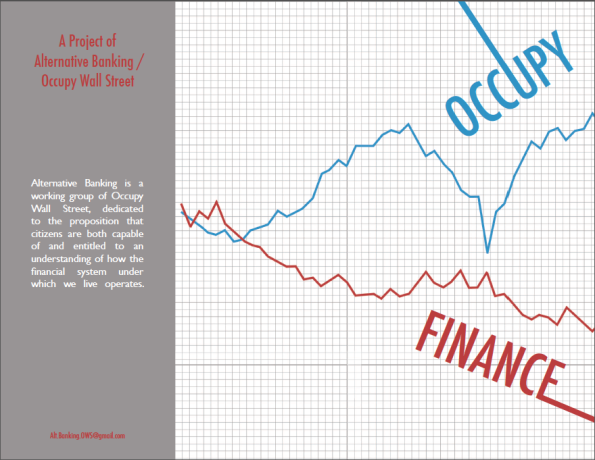 The Alternative Banking Group of Occupy Wall Street has published the Occupy Finance book.   The Alternative Finance Group is made up of  a group of financial professionals, accountants, technologists, economists, traders, engineers, housewives, househusbands, laborers, professors, students, activists and workers interested in reforming, revolutionizing and improving our financial system.

“We’ve been meeting since October 17th, 2011, soon after Zuccotti Park was occupied. We are dedicated to reforming the current financial system to make it work for the 99%. This doesn’t mean we are not asking for radical reform – we are – but that we are trying to work within the system for change. Other Occupy groups are attempting to start new kinds of financial systems. We think it makes sense to do both.

“We are dedicated to agitating for reform, and that can only happen if the public is educated about what is not working now. To that end we are extremely invested in educating the public about the current dysfunction.”

They have just published an excellent book, the Occupy Finance book.  We have republished the introduction below.  The book includes ten chapters divided into three sections:  The Real Life Impact of Financialization on the 99%, How We Got Here, Things to Do. We highly recommend their book and hope the first chapter below encourages you to read Occupy Finance.

The book is getting rave reviews

For more information on the Alternative Banking Group meeting and other activities visit here.

Fighting Our Way Out of the Financial Maze

Them that’s got shall get
Them that’s not shall lose
So the Bible said
And it still is news
Billie Holiday, “God Bless The Child”

When frightening and destabilizing events were taking place in the financial world during the fall of 2008, it seemed like every day a new institution was on the brink  of collapse and could be saved only by huge infusions of taxpayer money. After the dust—or rather, the dollars—had settled, we citizens naturally assumed that there would follow a day, or many months, of reckoning. How had the American economy arrived at such a moment, who was responsible, and what did we need to do to ensure that the same catastrophe would not happen again?

Five years have passed. Banks that were “Too Big to Fail” have gotten bigger, with the encouragement of the government. Wall Street continues to bundle and trade the many debts of average Americans. Big trading risks are taken by people who ignore regulations and their own internal warning systems, leading to enormous losses—see JP Morgan Chase. The elements of the next crisis are being put in place at this very moment by some of the same people and institutions that brought us the last one. They are making money, lots of it, while the making is good.

There has been no reckoning. There have been no apologies. There have been no serious changes to the laws, to the reputations of the significant players in the crisis, or to the way business is conducted. Not only were the people responsible for the financial meltdown not prosecuted, they walked away with millions of dollars in profits even though they caused the companies they worked for to face bankruptcy. We do not even know exactly what happened to the billions of dollars that were handed over to private firms, except that almost none of it made its way to mortgage holders trapped by forces they could neither anticipate nor control. There has only been great suffering and the loss of homes, jobs, and confidence in a better future.

To add many insults to our economic injuries, the architects of austerity in Congress,

the White House, and various state and local governments are requiring us to continue paying for the bailout with cuts in benefits, hikes in tuition, and loss of city, state and federal government services. Even worse, we are informed that we regular citizens, not the bankers and financiers, are the ones really responsible for any continuing fiscal distress, due to our profligate ways, our unpayable mortgages, and our pensions and health care costs.

This book is our reckoning. Some of us have long experience in the world of finance, having worked in banks or hedge funds or as financial advisors. Others of us are teachers, lawyers, students, or Teamsters who started out with a limited understanding of “securitization,” “credit default swaps,” and “collateralized debt obligations” but have taught ourselves about these instruments because we recognize their importance within our current economy. We have found that you do not need a PhD in math or economics to understand what is happening.

We have also learned that it is imperative for us to know as much as we can about the workings of the financial system because some of the most interesting facts never get reported. Contrary to what the 1% would have us believe, the way things are is not the way they once were, not the way they have to be, and most importantly—not the way they should be.

The effects of the increased hold of the financial sector on ordinary American lives have come to our streets, where there are fewer police officers; to our schools, where there are fewer teachers; to our pension funds, which are being put at risk in speculative investments; and to our friends and family who face repaying mind-boggling student loans but are unable to find work that pays a living wage. We know that we cannot wait for other people—presidents, senators, regulators, CEOs, economists—to fix our system. They haven’t. They won’t.

Some kinds of cheating are publicly condemned. Athletes accused of using performance-enhancing drugs are exposed and forfeit their titles; teachers and administrators who alter test scores lose their jobs and are arrested. But where is the outrage when whole laws are written for and by big banks and financial firms to give them unfair advantages in relation to competition, tax policy, and influence within government? Why do the tax laws provide that the compensation of hedge fund managers does not count as “salary” and thus is taxed at a much lower rate? How much money is legally kept in off-shore accounts by businesses that use our infrastructure to secure their profits?

In this country, we have been encouraged to trade the ideal of economic justice for that of equal opportunity, but this bargain, which never really existed, has been revealed as a cruel hoax. What we have is a lottery economy in which very few people do extremely well and the rest of us are supposed to bend our energies toward becoming one of those lucky few. We are urged to think of ourselves rugged individualists, and yet none of us gets through the day without the support of the people and the institutions around us. We who feel responsible for others as well as ourselves, for Americans who have lost their homes and are living in their cars or Bangladeshis who risk their lives in sweatshops, need to step up. We must join together to demand policies and laws that enable a robust and productive economy that distributes its rewards widely, rather than one which plays roulette with the nation’s wealth for the benefit of the few. When the foundations of our society—education of our children, care for the sick and injured, security for our elderly—are viewed simply as opportunities for the creation of ever more “innovative” financial products and profit centers, we erode the very basis of the communities that keep us all safe. We become prey for the financial predators. We know that the way it is not the way it has to be. Economic arrangements, however complex, opaque, and interconnected, are created by human beings and can be changed by them—by us. Taking on this responsibility is daunting,  also exhilarating. It is the first step in the direction of economic justice.

We know that the way it is is not the way it has to be. Economic arrangements, however complex, opaque, and interconnected, are created by human beings and can be changed by them—by us. Taking on this responsibility is daunting, but also exhilarating. It is the first step in the direction of economic justice.