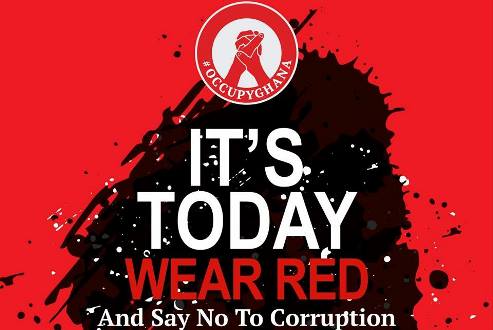 On January 22, 2016, Occupy Ghana,marked Red Friday to protest what they describe as the government’s “destructive” economic policies.

They also protested Government’s decision to accept what they call “two highly suspicious terrorists” in Mahmud Umar Muhammad Bin Atef and Khalid Muhammad Salih Al-Dhuby, “under the pretext of honouring international neighbourliness and compassion with America.”

Ghanaians wore red to call to government attention concerns raised by the pressure group and the citizenry including the hikes in utility tariffs, the exorbitant taxes on petroleum products, the “shady” Ameri deal and corruption among other things. Many Ghanaians have taken to social media to show pictures of themselves in red while others are using the hashtag ‘Red Friday’ on social media to comment on the state of the economy.

Ghana has been in a state of abyss for far too long. It’s time for total freedom and progress. #MahamaMustGo #AriseForChange #RedFriday!

Occupy Ghana has already come out to express support for the lawful declaration of nationwide strikes by organized labour earlier this week to protest the current economic difficulties brought on by the hikes in petroleum prices and utility tariffs. In a statement released earlier this week, Occupy Ghana also reiterated their numerous calls on government to effectively deal with corruption.

“Whilst it will be completely sensible to review the heartless fiscal decision, Occupy Ghana reiterates its call for the government to effectively deal with corruption, whose effect dents the economy annually by almost $3bn as some estimates have suggested.”

“… the snowballing effect of the cases of GYEEDA, SADA, Payroll fraud, Woyome’s scam judgment debt and a host of other debts have been overwhelmed by the dreadful and tongue wagging cases of inflated Airport construction costs, several inflated infrastructure deals, $98m Smartty’s deal, $1M bus branding, AMERI and Karpower deals and more,” the statement added. It is on the back of these points raised that occupy Ghana embarked on their Red Friday protest today.