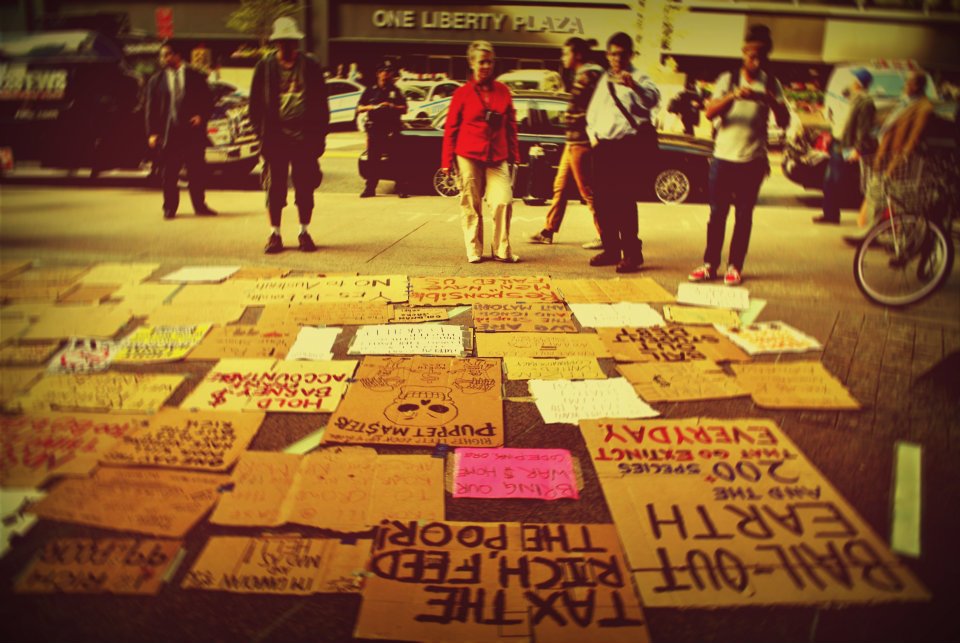 We came together on September 17th, 2011 to call out Wall Street for its toxic stranglehold over our lives and our body politic, to envision a new way of living free of this control.We spread far and wide, continuing the Movement of Squares that began with the Arab Spring and grew to encompass Europe as the people took to the streets to reconnect with each other instead of disconnecting and accepting economic austerity. We have been evicted from Occupy’s home at Liberty Plaza, but that was but one small part of an idea that cannot be killed so easily – that the people of the world will reclaim their agency and take direct action to improve their lives and the lives of their neighbors.Summer comes soon to New York City, and with it we hope we might return to Liberty Plaza and active resistance here around Wall Street, deep in the belly of the beast.

The most important function of all in Liberty Plaza was the free exchange of ideas, the ability to express oneself in political speech and be heard by your fellow man – together we each brought what we knew together and built a mosaic of the problems we face, learning that all of our grievances are connected and are based upon how we choose to relate to the world… and what we allow when we cede power, in choosing that relationship. Occupy Wall Street was formed in the spirit of direct democracy, to put people’s hands back on the power that drives our lives, and without a presence in Liberty Plaza that common space we shared as the pulsing heart and the quickening brain of our community has been lost to us.

On June First, Occupy Wall Street is coming home. We need to reconnect with each other, and to the great work that lies still before us. The struggle has continued on, and we have continued to struggle – but social distance has drawn us apart from the shared community we once so intimately embraced, and we want to re-engage with each other so that we can draw on each others’ strength and share support in our challenge against the powers that be and the corrupt system of the world they rely upon to hold them in place. We refuse to support them any longer, we refuse to support that which cannot sustain life for the many in order to raise up the few, and we invite each and every person who wishes to join us to pick up a sign and join us in person at Liberty Plaza to reclaim our common home and fill it once again with growing resistance.

Note: Check back throughout the week, as more events will be added to the schedule below.

Saturday, June 1st
9AM: Convergence Begins! Bring your signs, your opinions, your children – bring your willingness to support your fellow human beings and speak truth to power! Bring your books, to rebuild the People’s Library… and your willingness to read and share, to compare facts and help identify where things went wrong so we can put things right together!

6PM: People’s Assembly! Come be a part of political dissent and talk to others in a non-oppressive, horizontal assembly. We invite performers, musicians, puppeteers and artists to come perform at the assembly. We will be fluid and will respond to the needs of the community in stewarding the assembly. Simply raising your voice in public and saying “Enough!” can be a radically transformative act, and our voice shared together is a mighty thing to behold!

8PM: Sleep Cell Convergence! Occupy Wall Street changed the conversation by putting our bodies on the line in protest to the corruption we see eroding the very world around us, and while a mass re-occupation effort at Liberty Plaza will end only with police violence and put us in harm’s way in the attempt, smaller groups acting on a temporary basis with greater mobility can succeed far more effectively at spreading our message and challenging the worldview that is tearing us apart. When the sun sets on Saturday, all who are willing to take hard ground and take a stand will converge together to decide their targets and their tactics autonomously without central direction – a process that can’t be predicted and prepared against by the NYPD. No experience necessary – we will be spreading legal training and our experience in what has worked (and what has not worked) in past efforts by mixing NYC sleep-cell activists in each group as-needed, so that locals and visitors, new activists and experienced Sleepful Protestors can work together keeping each other safe and achieving the objective.

Sunday, June 2nd
9AM: Convergence Begins Again! Each and every day, we will meet in Liberty Plaza to reclaim the public forum and work together to change the world!

2PM: Direct Action Planning Meeting for the Monday, June 3rd Direct Action. We are seeking to re-commit to a weekly direct action in the Financial District, to make our voices echo against the walls of power and overcome them by overcoming the culture that allows them to be in the first place! Join us in determining how together we will stand up to Wall Street and their captured politicians in Washington!

8PM: Sleep Cell Convergence! Liberty Plaza is the home of Occupy Wall Street, but we express our power by direct action, and sleep on the streets as a political action to expose the corrosion that is corrupting our world. Our targets may consistently change, but we can always be found here first as we choose our actions of resistance on a nightly basis!

Monday, June 3rd
9AM: Convergence For Direct Action! While the details of this action are still being planned and will not be finalized before we as a wider whole have come together to agree upon how we are going to work together in resistance on Sunday, we will be meeting at Liberty Plaza at 9AM no matter which target is selected and what the nature of the action is – our resistance effort will be in the heart of the Financial District, and we will meet at Liberty Plaza and march together from there.

8PM: Sleep Cell Convergence! Liberty Plaza is the home of Occupy Wall Street, but we express our power by direct action, and sleep on the streets as a political action to expose the corrosion that is corrupting our world. Our targets may consistently change, but we can always be found here first as we choose our actions of resistance on a nightly basis!