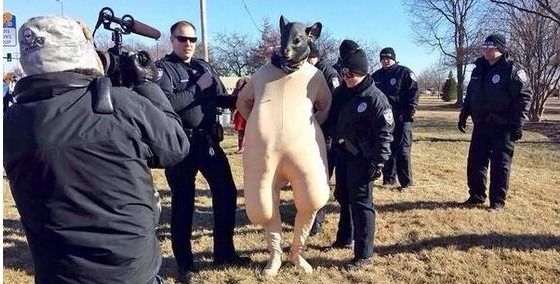 Ten protesters were arrested outside Monsanto’s headquarters during its annual shareholder meeting Tuesday, fighting for the right to know what is in consumers’ food.

The arrests happened shortly after the shareholders failed to pass two resolutions that would have changed Monsanto’s policies on its Genetically Modified Organism products.

Protesters say people should be concerned they are buying genetically modified food that the organizers say is not safe for human consumption.

“Basically GMOs are a big experiment on the American population. And we think many people are suffering food-related illnesses and they can’t track it back to the source because the food is not labeled,” said Adam Eidinger with Occupy Monsanto. “If GMOs are safe as Monsanto claims, then putting a label on them will only confirm how safe they are.”

Around 40 protesters gathered outside the company’s Creve Coeur headquarters, spending more than three hours at Monsanto’s entrance in the cold during the company’s annual shareholder meeting. The protesters sang, danced and waved signs at passing traffic.

Protesters demanded to pass two resolutions on GMOs. First, was required Monsanto to work with the Food and Drug Administration to label food containing genetically modified ingredients. And the second dealt with Monsanto’s potential liability to organic farmers.

In the end, after the shareholder’s meeting, the resolutions didn’t pass gaining only 4 and 6.5 percent support accordingly. The protest blocked traffic at Monsanto’s main entrance with five brightly decorated cars. Some of the protesters even locked themselves in or chained themselves to the cars.

But police used brutal force to disperse peaceful protesters, arrested 11 people and cleared the entrance. Among those arrested were an unidentified man wearing a giant rat suit and a musician from Los Angeles, Rafi Loiederman, who said he came to the protest to keep pressure on Monsanto.

“If we don’t deal with GMOs now, everything is going to be contaminated,” Loiederman said.

In a written statement, Monsanto touted its efforts at improving farm productivity and food quality.

“While we respect each individual’s right to express their point of view on these topics, we do not believe unlawful actions are an appropriate way to further any cause,” spokesman Tom Helscher said.

GMOs are on food labels in more than 60 countries around the world.

One of the resolutions was to label genetically modified food.