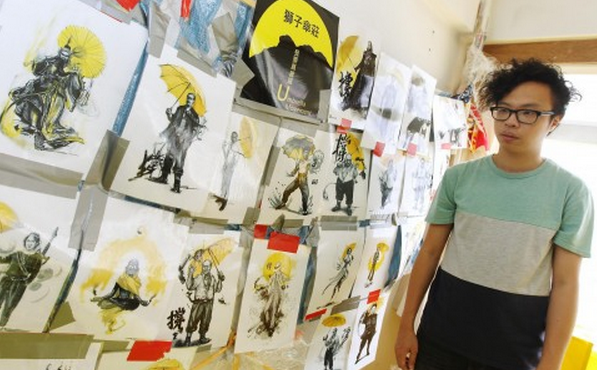 An exhibition of iconic objects collected from the sites of last year’s Occupy protests will open on Saturday, two days before the first anniversary of the start of the pro-democracy movement.

Hereafter: Objects from the Umbrella Movement will showcase 60 objects out of a total of 380 pieces collected from protest sites in Admiralty, Causeway Bay and Mong Kok.

The organisers, Umbrella Movement Visual Archive, said they retrieved the objects before police began clearance operations in December to end the 79-day sit-ins.

Sampson Wong Yu-hin, one of the organisers, said the passion and creative energy of the protests were unprecedented, and the objects served as a snapshot of the movement.

“We collected perhaps just a quarter of all the objects but they were enough to demonstrate the diversity and creative power of the people,” Wong said.

Exhibits will include a yellow banner with the words “I want genuine universal suffrage”, that was hung on Harcourt Road. Also on display will be a collection of drawings depicting political figures raising a yellow umbrella, which became a symbol of defiance after protesters used umbrellas to shield themselves from police pepper spray and tear gas.

There will also be booklets and Post-it notes on which supporters wrote messages of encouragement for protesters.

The exhibition will run until October 16 in Foo Tak Building in Wan Chai and at Woofer Ten art space in Yau Ma Tei.

Many artworks were collected before police moved in to clear barricades. Photo: Dickson Lee

Wong said he hoped the exhibition would raise funds to continue the work of the visual archive. The team want to make all their records of the Occupy protests available to the public.

A website will be launched during the exhibition period containing a list of the objects on display. But the archive team have also called on the public to help complete their records by posting any photos or background details from the protests.

Meanwhile, a large banner bearing the words “I want genuine universal suffrage” was hung on a bridge connecting the government’s headquarters with the Admiralty Centre yesterday.

League of Social Democrats member Tsang Kin-shing, better known as “The Bull”, said he and several fellow activists hung the banner to commemorate the Occupy movement.

The purpose was to remind Hong Kong people of their efforts during the movement, Tsang said. It was removed by police shortly after it was hung.