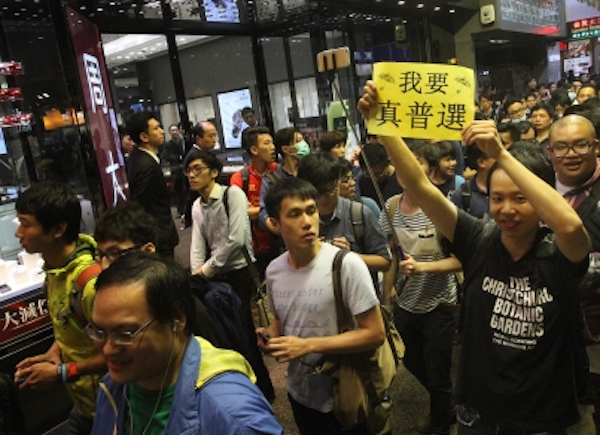 Occupy Protesters In Mong Kok Take To The ‘Shopping Tour’

Traffic may have returned to the Mong Kok protest zone, but last week’s clearance of the encampment has given rise to a new form of protest known as the “shopping tour”, with activists taking to the crowded footpaths to convey their political message.

Participants say it is more fun and a pleasant change from camping on the tarmac, plus it is proving even more effective as a strain on police manpower.

Every night since last Friday, dozens of protesters have gathered outside a cinema on Sai Yeung Choi Street South. They watch movie trailers while chanting spontaneous slogans inspired by images on the screen. Then they roam the footpaths, obstructing commerce while evading police.

Before the “tour” starts, the air fills with cries of gau wu, a Cantonese transliteration of Putonghua’s gou wu, which means “to shop”. The expression became popular after a mainland tourist who joined an early anti-Occupy rally told a reporter in Putonghua that she was there to shop.

“Now it’s the reverse; we are on the offensive and the cops are put on the defensive,” said a semi-retired protester aged in his 50s who wished to be identified only by his surname, Ng.

Having joined the gau wu tour nightly since last week, Ng said window shopping was “a lot more fun” than guarding the roadblock outside City Hall in Central, which he has done since the start of the Occupy protests. “This is not even illegal,” he said.

It is understood that during evenings over the past week the police had more than 2,500 officers either on the ground in Mong Kok or on standby to prevent any tours turning into a reoccupation. Indeed, one of the favourite slogans of the “shoppers” is “let us occupy Mong Kok together with the police”.

But shops along the gau wu tour route do not seem to welcome the “shoppers”. About half, mostly chain stores targeting mainland tourists, close their shutters as the group passes by.

Police officers are not amused. Sporadic clashes have broken out when police have singled out group members, subduing them without giving any reason, protesters say.

Those singled out “often have quarrels with the cops beforehand, and that’s why they are targeted”, said Ada Chan, a former bank employee in her 50s, who joins the tour every night. “It’s very ugly; they’ve even given up making up excuses and just take you away without explanation.”

Scuffles usually break out when the tour reaches its last stop on Tung Choi Street, where minibuses operated by Chiu Luen Public Light Bus Company pick up passengers. The company was one of two applicants for the injunction orders which allowed last week’s clearance.

Police have taken dozens of people into custody since the gau wu tour started last week. But that has not scared away those determined to “shop”. “The more protests I attend, the more injustice I see,” Chan said.