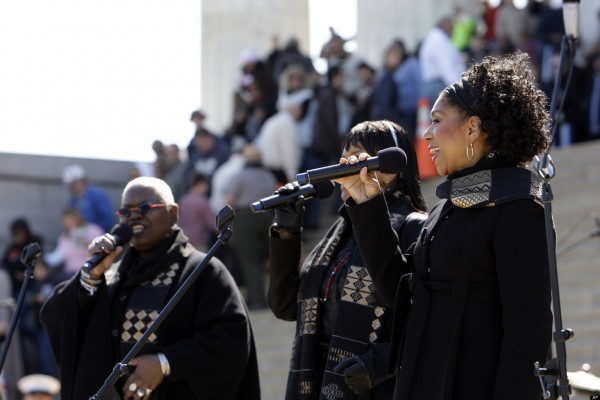 Occupy Radio: The Power Of Song In Protest

Above photo: Sweet Honey in the Rock performs during an event to commemorate Marian Anderson’s performance 70 years ago, at the Lincoln Memorial in Washington Sunday, April 12, 2009.  Anderson, who was black, couldn’t sing at Constitution Hall because of the color of her skin. First lady Eleanor Roosevelt resigned from the DAR in protest and along with a coalition of black and white community leaders, arranged to have Anderson sing at the Lincoln Memorial. So in 1939 she performed on the steps of the Lincoln Memorial on Easter and sang “My Country, ‘Tis of Thee.” Ysaye Barnwell is on the left. (AP Photo/Alex Brandon)

When Pete Seeger died, a sense of the impermanence of life increased my urge to ask Ysaye Maria Barnwell, a Grammy Award winning, 34 year member of Sweet Honey in the Rock, to speak on Occupy Radio about the importance of song in social protest. I had met Ysaye when I attended one of her Building a Vocal Community workshops, where she riveted the room with a warning and an instruction.

“Learn the old protest songs and spirituals,” she said. “You’re going to need them.”

Ysaye mentioned in our radio interview that when she went to Occupy Wall Street, she found that few people knew the old songs, and there weren’t many new ones, either. Chanting and drum circles dominated the vocal space, but these are different than song. A recent video of a Keystone XL pipeline demonstration has been circulating through social media, along with comments like “I’m crying” or “so beautiful.” In it, hundreds of people sing “If I Had A Hammer” together.

At the end of the video, the group breaks into a chant, and the atmosphere changes dramatically. What is it about song that opens our hearts and evokes the deep strands of passion, determination, vision, and hope?

In recent years, I have heard plenty of cynical scoffing at the old protest songs of the grey-haired hippies and the spirituals of the Civil Rights marchers. I have seen the eye rolling of activists who can rattle off phrases like “we need to use prefigurative politics based on horizontalism to decolonize the oppressive dominator culture of the hierarchical neo-liberalist economy.”

Well, there’s nothing more decolonizing than singing together.

Our current dominator culture grew out of centuries of colonization and oppression that include the subversion of the early European pagan and tribal cultures to successive waves of invasion. One could argue that Anglos are some of the most colonized people on Earth, and in uninterrupted cycles of oppression, they have continued to perpetrate cultural and biological genocide to this day. As the outgrowth of American colonialism spreads destructive, neo-liberalism capitalism around the globe, this strand of dominator culture has now pushed the limits of invasion to the brink of species extinction and planetary ecocide.

Many are looking for mass acts of defiance to stop the onslaught of a sick system, and because the problems we face are cultural and systemic, I believe that the solutions must be equally dramatic and profound. Means are the ends in the making, as the saying goes, and if we want to grow a revolution of profound change, we must plant the seed in every action we take.

This is where singing comes in.

Song is one of the original aspects of all indigenous societies. While these societies often included professional singers such as balladeers and griots, they also had traditions of communal singing. Work songs, teaching songs, folks songs, and songs for rituals involved common participation in the musical culture. Song was not something singers did; it was what communities engaged in.

We have lost this in American society.

In the modern capitalist-consumer system, song is commoditized by creating stars, elevating them above us through the pedestal of the stage, and then selling us access to song through tickets, CD’s, downloads, and tee-shirts. In this way, the elite maintain control over the masses. Communal singing has no role in the capitalist system unless it can be sold through books, CD’s, and movies.

We must decolonize our minds, culture, and interactions with one another, and liberate our lives from price tags.

Just as the Occupy Movement publically contrasted participatory democracy to the corporatized representational system of American politics, so can reintegrating song into our movements demonstrate a living culture in contrast to commercialized consumption of art.  By singing during demonstrations and by using educational singing gatherings as a tool for building respect and connection in movements for change, we can reclaim our musical culture as a participatory, community-building, democratic, and non-commercialized experience. Communal singing is an excellent example of a horizontal structure that breaks down the hierarchical mentality. In community singing, the goal is not to place one human being above another, but to include all voices in a common experience of song.

Through integrating song, our movements can also offer a different version of American history. The old labor songs, anti-war songs, and spirituals contain an oral representation of the many struggles for justice, equality, and freedom that our history books often gloss over. Centuries of freedom seekers live and breathe in these old songs. A lineage of teachers, armed with guitars and voices carried these songs forward through the decades. A different history of America is embedded in the lyrics and a sense of common identity for all ages, genders, and races can be found through sharing these songs. The divisions of today can be bridged through sharing the songs of the past.

As Ysaye Barnwell said in our interview, “I can’t stress the importance of people coming together and using their voices to take over space.”

Gathering in public places to lift our voices in the songs of freedom seekers is a beautiful demonstration of our place in the long lineage of those who have struggled for social change. In a time when corporate-political powers thrive on our isolation,  profiting from our lack of community, and commercializing all aspects of our lives, coming together in public space and joining our voices together is a courageous act of defiance and resilience.

Are you on Stitcher? We are too! Listen here: http://www.stitcher.com/podcast/occupy-radio?refid=stpr%60

Author/Actress Rivera Sun is a co-founder of the Love-In-Action Network, a co-host on Occupy Radio, and, in addition to her new novel, The Dandelion Insurrection, she is also the author of nine plays, a book of poetry, and her debut novel, Steam Drills, Treadmills, and Shooting Stars, which celebrates everyday heroes who meet the challenges of climate change with compassion, spirit, and strength. www.riverasun.com