Occupy, Resist, Produce: Inside The Self-Managed Factory Of Vio.Me.

Thessaloniki, Greece – Workers have successfully self-managed the production of environmentally-friendly cleaning products for the last six years in the occupied factory Vio.Me. There are no bosses in this factory on the east side of Thessaloniki, Greece’s second largest city. Workers have been in full control since occupying the factory in 2013, two years after the workers had stopped receiving paychecks from the business due to the parent company having filed for bankruptcy.

Unicorn Riot brings you inside the worker-run Vio.Me. facility in our three part video series. We spoke with five of the workers, took a tour of the factory, gained a deeper perspective and history of Vio.Me. from the workers, and a had sit-down with Dimitra, a psychologist in Vio.Me.’s autonomous and open-to-the-public Workers Healthcare Center.

Viomichaniki Metaleftiki (Vio.Me.) was originally established in 1982 to produce adhesives and other products. It was a subsidiary of the multinational company Filkeram-Johnson S.A. which was the first and largest ceramic tiles producer in Greece before it went bankrupt during the financial crisis of the 2000s and stopped paying its 350 workers in May 2011.

After years of being owed money with few prospects of being paid by this employer, or of gaining similar employment elsewhere, the radical union inside Vio.Me. that had already been organizing inside the workplace, along with the Solidarity Initiative of Vio.Me., decided to occupy the factory and seize the means of production. 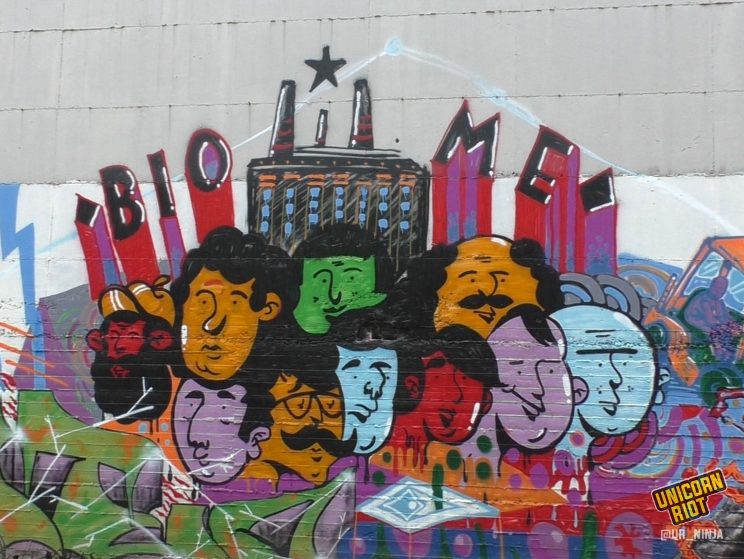 Graffiti adorns the factory’s outside walls

Vasillis, a worker inside Vio.Me.’s Athens storefront, told us the assembly that made the final decision to occupy the factory had the support of over “90 percent of the workers of the factory“. He pointed to the workers union’s “different approach” as a major reason for the successful occupation, saying the union “didn’t support the bosses“, it “stood against state-run syndicalism” and it “was not attached to the left political parties.”

After they took the factory, Vasillis said, “then there was the big question: What are we going to produce and sell?”

The first stage was direct action from the workers, who occupied a few buildings of the abandoned factory and guarded the machinery. Nicole, a worker a Vio.Me., told us during a tour of the facility that the bosses were auctioning and selling off all the materials in the factory buildings, so it was important that the workers guard the equipment and raw materials, as they were “in a sense, guarding their own money.”

The Solidarity Initiative of Vio.Me. decided for the occupied factory to produce natural and ecological cleaning products and vegetable oil soaps. 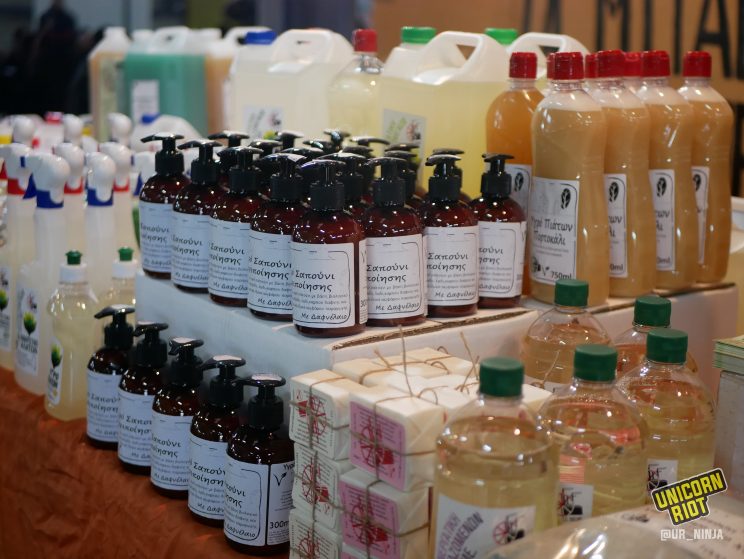 “The raw materials that we’re choosing to use in the ecological products are biodegradable, they don’t harm the environment, and also in the natural detergents we use only vegetable oils; we don’t use any animal fats in our products.” – Vangelis 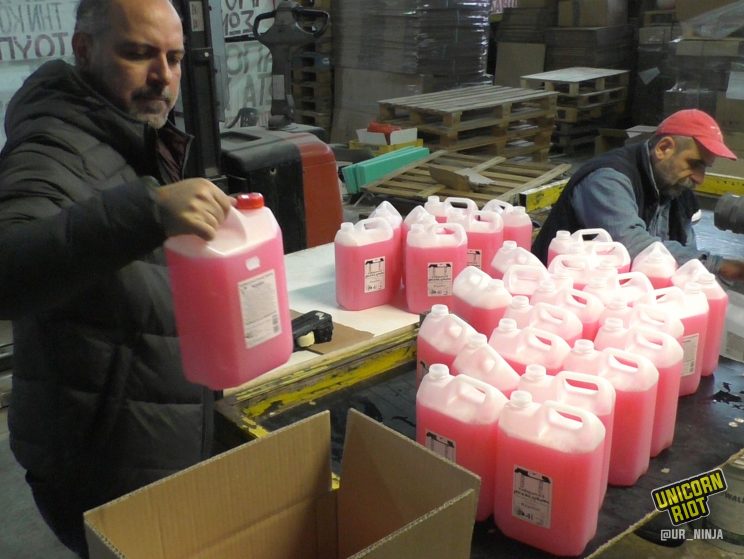 Spiros and Makis bottling floor cleaner for a hospital

Vangelis, a chemical engineer who specializes in research and development of new products said that the materials included in the products they produce are all natural and do no harm to the environment. The use of eco-friendly products is important to the values of the workers and something they feel good about producing. 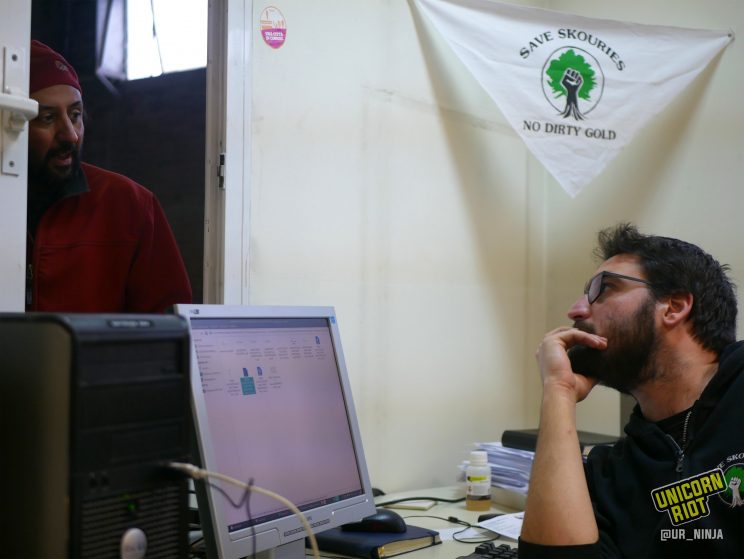 Vangelis working from his office

“The first users of our products were members of the Solidarity Assembly, members of some other political groups, organizations, and more radical political parties that were supporting this idea of self-management.” – Vangelis

From the production on the shop floor, to the sales, accounts, and marketing, to the conditions in which they all work, the workers have full control. They self-manage the factory and even rotate their workflow based on their own choices each day to take part in different aspects of the production.

The workers of Vio.Me. meet every morning in their workers’ assembly to decide their daily work plan. Vangelis told us that the workers’ assemblies are ideal “because it’s something that has to do with pure equality and no hierarchy. Everyone has one vote, everyone has the same amount of time in order to express him or herself.”

All of the major decisions inside Vio.Me. are made by consensus. This doesn’t come without problems though: “The main issue with that is not only voting or deciding about what you do, but also being responsible for doing what you have decided,” remarked Spiros. 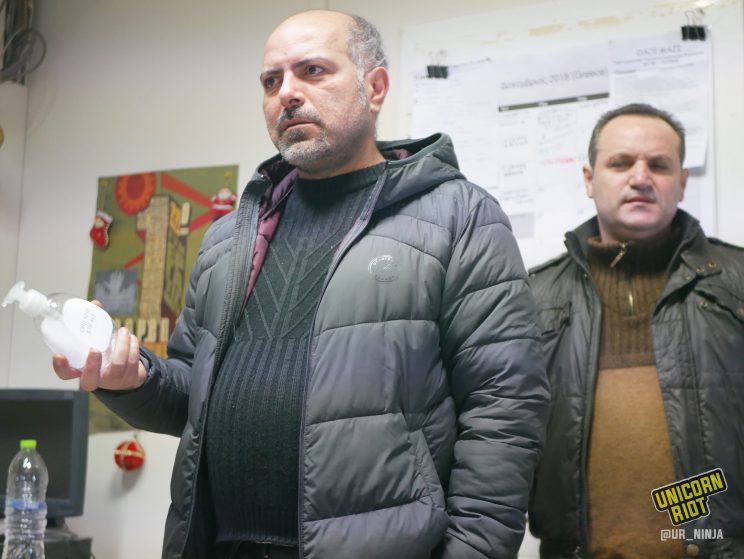 “All the elements of self-democratic management are functioning here in the factory, which means that there are daily and weekly and monthly assemblies, that the decisions are made through that.” – Spiros

Makis, who has been working in the factory for over two decades and was one of the original members of the occupation, spoke highly of the honor that the workers felt by going to a job that they believed in. He told us that a “comrade once said, ‘this factory is a factory that mainly produces dignity’,” and explained that meant a lot to him.

“We managed, as members of the working class, not to obey orders by the bosses, but to make our own orders.” – Makis

To get to this point of successfully running an occupied factory for over six years now has not been an easy task for the workers. They are also under an overarching threat of auction or a raid of the factory as they are not yet within legal standings.

Because the bankrupt Filkeram company owes money to the state, private individuals, and its workers, state-run auctions of the field that Vio.Me. resides on have taken place since November 2015. 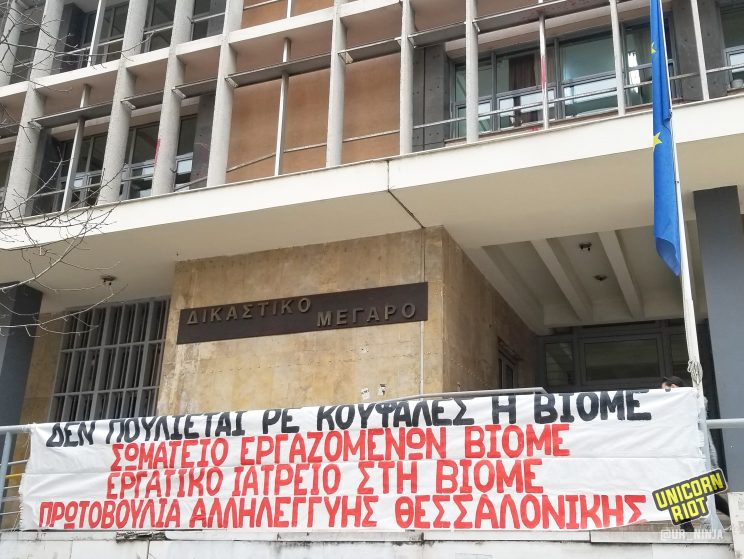 Auction proceedings happen in a downtown courthouse in Thessaloniki, almost yearly. The cycle includes multiple tries at bids to sell the property, usually five, and in the past has gone one day per week for five weeks.

The scene during each auction is similar: Riot police line the hallway to the particular floor of the court rooms of which the auction is held as Vio.Me. workers and community members standing in solidarity amass in the stairwell entryway and hallway. In the case there is a bid on the property, they will attempt to try to block it.

“What we’re doing about facing that problem is asking for international and domestic solidarity … and also we are asking from people to gather at the court at the time that the auction is taking place in order to block it if someone comes and wants to buy the field.” – Vangelis

There has been no bid yet, and after each auction, the price of the property goes down.

The workers of Vio.Me. have filed paperwork with the Ministry of Labour to be legalized but Vangelis says, “there is no political will so this proposal is just kept in a way that is not applied.” 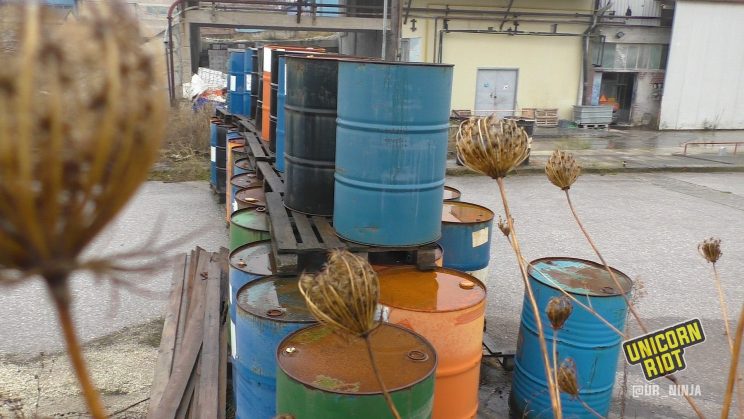 Though there have been threats against the Vio.Me. cooperative, and despite the time and energy required by each worker for just a small amount of pay, the effort is worth it to those worker-owners with whom we spoke.

“We are happy to work in this factory daily, and we are happy when we start from home to come here, to come to our job.” – Spiros

Beyond being happy about coming to his job, Spiros implied that they feel a sense of duty for themselves and the next generations. He said the capitalist economy isn’t worried about “establishing a functioning economy, they just care for profits“, and it is the “responsibility” of workers at the base of society to “take the control of what we are producing and how to produce, and to save the production capacity, to save wage labor.”

Art on wall of Vio.Me. by artist Skitsofrenis. Translations – small writing: a quote from a Tasos Livaditis poem “you are too small, you have no room for my tormented sigh” – Graffiti on right side: “The factories belong to those who work them“

Vangelis told us that he thinks “the workers from the base should equally manage every workplace“. Those we spoke with at Vio.Me. also pointed out how natural it is for workers to have control over their workplace. They described a strategy of self-organization starting from daily conversations each person has with their co-workers and others, to planning and taking small actions, to building of workers’ confidence to do more radical actions.

“We need, what I think as a better society, is a broad self-managed society, but we cannot only do propaganda about it and discuss about how good it is. You have to take action about it and to build that.” – Spiros

The values of equality, self-management, self-organization, autonomy, and horizontal organizing are a part of the daily culture at Vio.Me. This culture also enriches the mutual support in the broader community, which predominantly sees the occupation in a positive light. The assemblies of the Solidarity Initiative further allows for an equal participation from all community members or members from other networks of solidarity and worker’s economy who want to be involved.

The Workers Healthcare Center is reclaiming equal relations between specialists and patients with a radical new approach to health services that are also focusing on the working conditions.

The Healthcare Center has seen over 200 visits in the last three years by about ten specialists who have voluntarily provided holistic integrative health services free of charge to anyone who comes in from the broader community. See our full special on the Workers Healthcare Center. 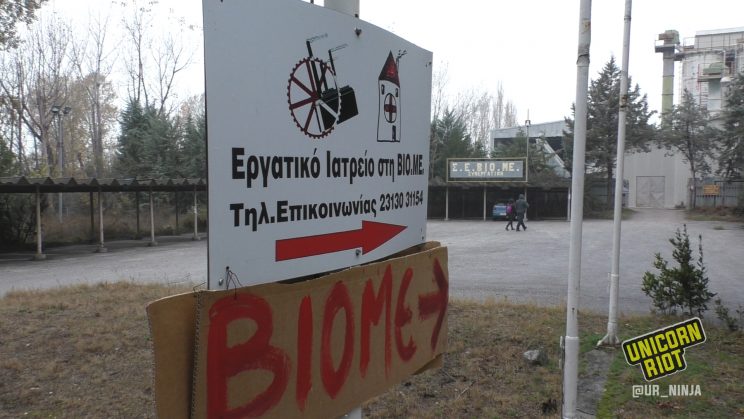 The occupied facility not only houses a radical healthcare center, but also numerous festivals, concerts, and other public events. The factory also became a transit spot for solidarity items and donations going to refugee camps during the height of the refugee crisis, when many thousands displaced from Syria and beyond were fleeing into Greece from western-led wars.

These varied uses re-engage the work space into a radical community venue and a commons.

Eclipsing six years of occupation, the workers of Vio.Me. are happy to come to work and to be able to provide themselves a living while producing eco-friendly cleaning products, all under full worker control.

Vio.Me. has proven to be a tangible real-life solution to workers abandoned by a bankrupt factory and a corrosive economy. As the workers carve a pathway forward, they illuminate how an existence beyond the norms can come to fruition.

“[Vio.Me. is] the Alpha and Omega of anarcho-syndicalism.” – Vasillis