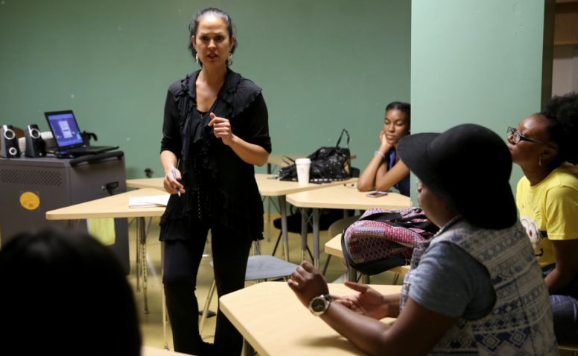 Occupy Summer School Teaches Teens How To Stage A Protest

Marni Halasa usually turns heads in full length wedding dresses, scanty police costumes, or while gliding by on rollerblades in elaborate winged costumes. But last Friday, she was a blank canvas at the Urban Assembly Institute for Math and Science for Young Women, an all girls public school in downtown Brooklyn.

Students from the school are learning how to stage an effective protest through Occupy Summer School, a three-week long course started by Occupy Alternative Banking. The class introduces the high school students to activism, activists and social movements. Cathy O’Neil, an Occupy member, former Barnard math professor and hedge fund anaylst, said the course will culminate with a protest of the students’ choice on July 22.

Halasa’s lessons rounded out week one, and during the two hour long class she told the the young women her own story of how a professional figure skater, lawyer and journalist became wrapped up in the political process, and how they can effectively stage a creative protest.

“I read the paper and I get pissed off,” Halasa said. “Usually at protests you see angry protesters, and it can be intense. And here I am trying to be a butterfly or fairy. It’s absurd, but for me I enjoy the absurdity.”

In between bites of Zabar’s bagels and talks of the Greek debt crisis, fracking, Wal-Mart executive bonuses and Rupert Murdoch, Halasa answers question — how do you get the courage to wear those costumes? — and encourages them to make their cause heard.

“What are they [the media] going to like that they can’t ignore?” Halasa asked.

The young women are concerned with different issues — from mass incarceration and school funding — but last week agreed they could collectively get behind inequality of the sexes and equal pay.

“I know it sounds weird but I don’t want to learn to cook because I should know how to cook,” said Shavonnie Victor, 17, a senior at UAI. “People still expect men to go to work and women to have a house full of kids, if I don’t aspire to raise children, it doesn’t mean that there’s something wrong with me.”

“My family is from the islands, and the stereotypes are very strong there, and that’s why I want to make a change,” said Miriam Gerson, 17, a senior.

A tentative protest is planned for next Wednesday, with a bake sale with different prices for the same product depending on the buyer’s gender, a simple dance routine and girl power playlist. On Monday, O’Neill said the class discussed a protest for free MetroCards for city teens. The class plans to vote on the protest topic closer to the end of the course.

“Usually my [figure skating] kids are like ‘Marni’s so crazy, she protests in the streets but we still love her. After they see I’m in the newspapers, they want to come with me,” Halasa said.

“Most people don’t realize they can be a part of something like this,” Halasa said of joining political protests. “I want to open their eyes. I do this on my own time, nobody funds me and it really is a labor of love.”