Occupy Wall Street In The Age Of Trump

Above photo: By Tequila Minsky, Occupy Wall Street alumni Elliot Crown, in mask, and Marni Halasa, showed up for the 6th-anniversary return to Downtown’s Zuccotti Park on Sept. 17.

New York City – It has been six years since the movement calling itself Occupy Wall Street took over Downtown’s Zuccotti Park for a weeks-long demonstration that spawned similar actions across the country protesting corporate greed, social and economic inequality, and the domination of the “One Percent.”

The encampments have long-since dispersed but dozens of die-hard Occupiers and activists gathered at the place where it all began on Sept. 17 in Zuccotti Park to declare that the movement still has work to do — now more than ever.

Occupy alum Marni Halasa — who is running as an independent for the City Council seat in District 3 on a platform of saving small businesses — said that even though the demonstrations fizzled, the movement spawned advocacy groups and inspired activists, taught people how to protest, and prompted many progressives to run for public office in the years since.

The ascendancy of Donald Trump to the Oval Office has re-energized many of the same protesters to become leading voices in resistance against his agenda.

Jerry Ashton, who came to the anniversary to share his admiration for all those who protested six years ago, was inspired in the wake of Occupy Wall Street to create a charity, co-founding RIP Medical Debt, which takes in donations and uses that money to pay off people’s medical debts.

With Trump and the Republican Party’s again pushing to repeal Obamacare, Ashton said it’s more important than ever to help the 64 million Americans struggling to pay off their medical bills.

“There should be a desire to relieve this burden,” said Aston. “They have to realize that this struggle goes across party lines.”

Halasa said that she sees Trump’s rise as not only energizing but sharpening the often disparate Occupy movement, giving it a focus it sorely lacked in the beginning.

“Groups are more focused, one demand is to get Trump out of office,” said Halasa. “In Occupy, we had a host of issues we were fighting for, but these groups, such as Rise and Resist, their whole focus is to drive Trump out of office.” 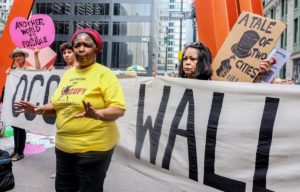 Photo by Tequila Minsky
An activist called “Miss K” was inspired by Occupy Wall Street six years ago to become a crusader for affordable housing.

An activist who goes by the monicker “Miss K” was also inspired by Occupy Wall Street to become a crusader for affordable housing, which see sees as the only solution to the city’s homelessness crisis.

“My activism started right after the protesters were moved out,” she said. “I was there this year to let people know that finding affordable housing is a crisis and homelessness is on the rise.”

She is part of an organization called Picture the Homeless which is fighting against landlords who hold on to vacant property or empty housing units until they can sell them for profit. The organization is also pushing the city to compile a public list all vacant properties throughout the city.

“Many of the groups that you see protesting are from people that learned from Occupy. They were there during the protest, they watched and learned,” said Halasa. “I must say the legacy of Occupy Wall Street will forever live on.”