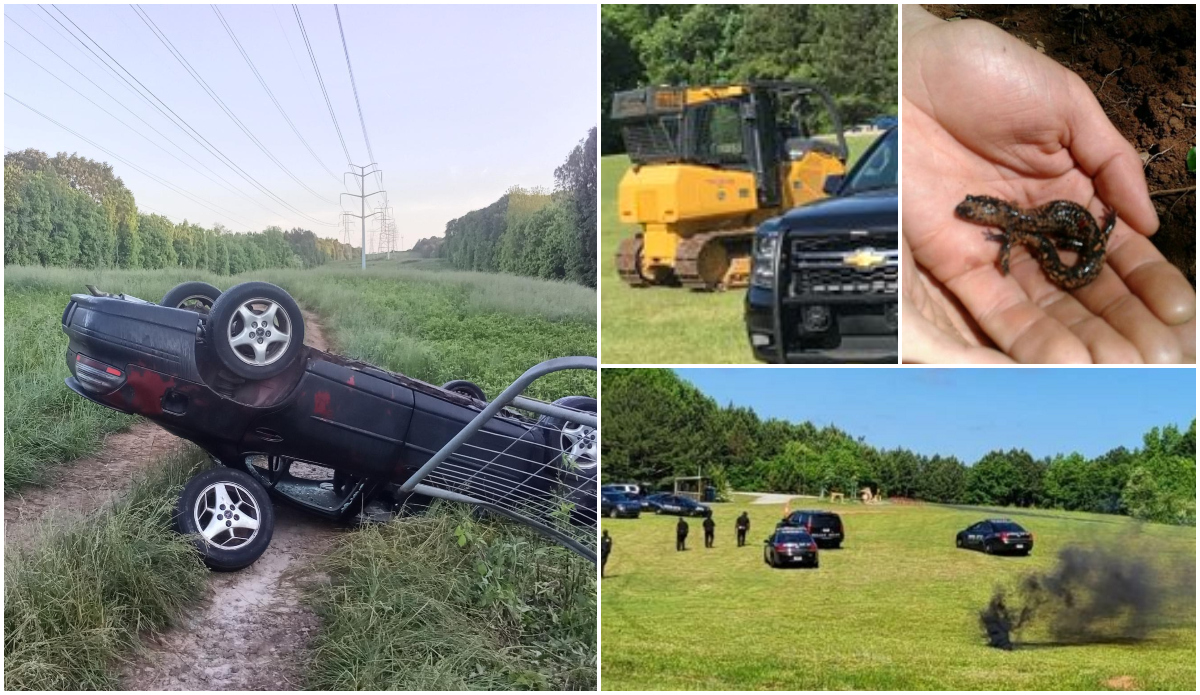 Off-Duty Police Pushed Out Of Atlanta Forest By Land Defenders

The following report, submitted anonymously, details how a bulldozer, accompanied by off-duty police, destroyed part of a Dekalb County park, before being pushed out by land defenders.

On Monday, May 9, around 9:15am, people inhabiting the Atlanta Forest witnessed a bulldozer accompanied by two Dekalb County cops bulldozing a path in Intrenchment Creek Park – a public Dekalb County park directly adjacent to the Old Atlanta Prison Farm.

The joint projects of “Cop City” and Blackhall Studios soundstage expansion threaten hundreds of acres of the largest contiguous piece of the Atlanta Forest, located in Southwest Dekalb. Often called “the lungs of Atlanta,” the land borders the South River and is also known by its original Muscogee/Creek name, the Weelanuee Forest.

On Monday morning, the bulldozer, marked “Dodd Drilling, LLC.,” destroyed a significant swath of forest, injuring plants and animals in its path. When people nearby learned about this, about 30-40 adults and at least 1 child quickly responded and gathered around the bulldozer, confronting the project managers and police officers on the RC Field. Those gathered shouted “Go home!” and “This is a public park!”

When Dekalb County police protecting the bulldozer were confronted, it was revealed that they were actually working as off-duty, uniformed private security, seemingly taking orders from the construction management. The management, who wore vests labeled “Contour Engineering” and “Dodd Phillips,” claimed that they were not working for Blackhall Studios. Georgia state law permits off-duty police officers to be hired, along with their uniforms, service weapons and vehicles, by private companies for their own purposes.

The police expressed that they were not aware that this was a public park — they did not even know what job they had been hired to do. Faced with a confident group of responders intent on defending the forest from further destruction, police and the construction management quickly made a decision and informed the crowd: OK, they would leave.

The off-duty cops had called in reinforcements from Dekalb County, but by the time police arrived, workers were driving the bulldozer back to the parking lot. The police were persuaded to leave by the actions of intelligent people acting quickly and collectively in defense of the land.

The responders made it clear they would not back down from the forest, and followed the cops and bosses as they quickly retreated back to their cars, witnessed workers load the bulldozer onto the transport truck, and escorted them all out of the field. Police scanners reported that the vehicles transporting the bulldozer faced a barrage of rocks and had their windshield smashed.

Intrenchment Creek Park has been the subject of significant controversy since the Dekalb County Commissioners agreed to a likely-illegal land swap deal with the then-CEO of Blackhall Movie Studios, Ryan Millsap – trading a forested public park for a pile of dirt. Blackhall Studios is now under the ownership of a California-based equity firm called the Commonwealth Group. But the former CEO, Millsap, is currently still party to a civil suit by the South River Forest Coalition & South River Watershed Alliance, which prevents Blackhall from doing any construction or clearing on the 40 disputed acres of Intrenchment Creek – a public park he claims to “control.” Indeed, for several weeks, Blackhall has been using the RC Field, managed by the Atlanta Radio Control Club, as overflow parking for extras and crew working on film shoots at their existing soundstage in the Atlanta Forest located at 1415 Constitution Rd SE, Atlanta, GA 30316.

So, who is Intrenchment Creek Park under the custody of? The park remains protected from an injunction related to the Dekalb County civil case against the land swap deal. Millsap and Blackhall are not allowed to conduct any construction or land clearing. Technically, the land is still property of the Dekalb County Parks department. Members of the Atlanta Radio Control Club, employees of the Dekalb County Parks & Recreation department, and someone associated with Blackhall Studios all stated via phone that they were not aware of any planned destruction and did not know what the bulldozer could be for. The police and workers seemed unclear what they had been contracted to do, exactly, who they had been contracted to do it by, and what part of the woods they should be doing it in.

Their Confusion Is Our Clarity

What is clear? It is clear that Ryan Millsap and his Blackhall associates will act extra-judicially to destroy the forest, disregarding the legal constraints ordered to them by the Dekalb County Civil Court. If they wish, according to Georgia law they can simply pay to hire uniformed police officers, their service weapons and vehicles, to work for them off-duty as “private security” and destroy a public park on a whim. And actually, Dekalb County will pay them to do it, offering Blackhall Studios $64 million in tax breaks to expand their soundstage into the most ecologically precious part of the Atlanta metro area.

It is clear that steps must be taken to protect the Atlanta/Weelaunee Forest from devastation by private entities. The people who inhabit and defend the forest and neighborhoods appear to have the determination to act and no higher-ups to listen to. They are highly-organized, creative, resourceful and act on their own authority. The years-long struggle to defend both the public park and the adjacent Old Atlanta Prison Farm has generated significant controversy and nationwide action. Already, Reeves Young, a company contracted to oversee bulldozing and forest destruction, has dropped out of the Cop City project due to intense public pressure.

The Questions Ask Themselves

Are these companies, Dodd Drilling and Contour Engineering, prepared to be on the front lines in a highly controversial project? Are they prepared and willing to conduct possibly illegal work on this project? It’s clear that they will not be able to finish their jobs destroying the local forests, as people from across the country take decisive action to protect this land. Are these companies prepared and willing to anger residents and incur the costs — social and economic — of participation in this project? There is an ongoing call for a Week of Action to Defend the Atlanta Forest through May 15th.