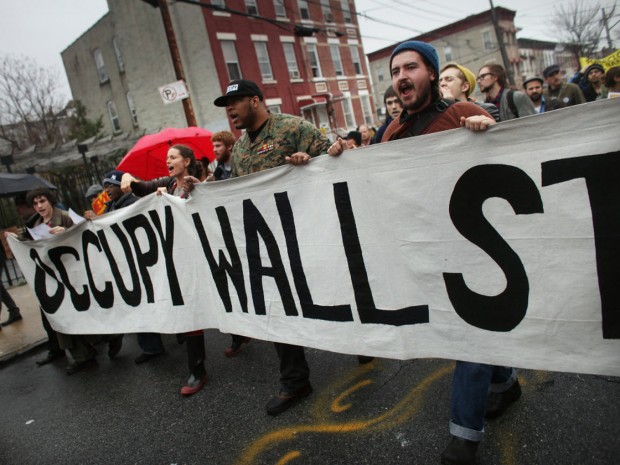 Note: The New York Times report below is based on unclassified documents that have been publicly released concerning the response of local, state and national law enforcement to the occupy movement. While it shows mobilization of incredible resources against the nonviolent Americans seeking to create a better world, we need to remember it is only the tip of the iceberg — this is what the government has voluntarily released and declassified.  No doubt the full picture would show even greater intelligence gathering, infiltration and disruption of the protests.

People involved in movements for transformational change toward economic, social and environmental justice should read this report and realize how much power we have. Governments at all levels were frightened of the occupy movement because people across the country stood up together and took the unusual step of taking over public space to expose the deep corruption of the US economy and government that is not ruled by the people but ruled by money. Exposing these truths is a great threat to the power structure, they count on these realities remaining unknown. The people in power (in the economy and government) know their own corruption and fear exposure.

The occupy at its peak activated 350,000 people in a country of 350 million.  Look at the impact 1/10 of 1% of the public had. We have stopped some terrible policies from going forward and have changed the debate about the unfair economy, wealth divide and corruption of government. This should give us confidence.  While the media does not cover it, our estimate is that the number of people active in the movement for social, economic and environmental justice has multiplied since the encampment phase of the movement. Research of movements over the last 100 years shows that when 3.5% of the public mobilizes government cannot withstand the pressure. This is an achievable goal and when we reach it we will have all helped to create a mass movement that will transform the country. KZ

When the Occupy protests spread across the country three years ago, state and local law enforcement officials went on alert. In Milwaukee, officials reported that a group intended to sing holiday carols at “an undisclosed location of ‘high visibility.’ ” In Tennessee, an intelligence analyst sought information about whether groups concerned with animals, war, abortion or the Earth had been involved in protests.

And in Washington, as officials braced for a tent encampment on the National Mall, their counterparts elsewhere sent along warnings: alink to a video of Kansas City activists who talked of occupying congressional offices and a tip that 15 to 20 protesters from Boston were en route. “None of the people are known to be troublemakers,”one official wrote in an email.

The communications, distributed by people working with counterterrorism and intelligence-sharing offices known as fusion centers, were among about 4,000 pages of unclassified emails and reports obtained through freedom of information requests by lawyers who represented Occupy participants and provided the documents to The New York Times. They offer details of the scrutiny in 2011 and 2012 by law enforcement officers, federal officials, security contractors, military employees and even people at a retail trade association. The monitoring appears similar to that conducted by F.B.I. counterterrorism officials, which was previously reported.

In many cases, law enforcement officials appeared to simply assemble or copy lists of protests or related activities, sometimes maintaining tallies of how many people might show up. They also noted appearances by prominent Occupy supporters and advised other officials about what — or whom — to watch for, according to the newly disclosed documents.

The files did not show any evidence of phone or email surveillance; instead, much of the material was acquired from social media, publicly disseminated information and reports by police officers or others. While a Homeland Security bulletin in October 2011 warned that protests could be disruptive or violent, some civil liberties advocates are concerned about the monitoring of lawful political activities tied to the Occupy movement. Homeland Security officials acknowledged that the movement, which criticized the financial system as undemocratic, was “mostly peaceful.”

“People must have the ability to speak out freely to express a dissenting view without the fear that the government will treat them as enemies of the state,” said Mara Verheyden-Hilliard of thePartnership for Civil Justice Fund, which obtained the documents.

The nation’s 78 fusion centers — which have received hundreds of millions of dollars from the Department of Homeland Security and other federal agencies, as well as money from state governments — are run by state and local authorities. They were created after the 2001 Qaeda attacks to share information about terrorism or other national security threats, but have provided little of value related to that mission, a Senate subcommittee report concluded in 2012. Many centers, which can involve dozens of officials from police and fire departments, federal agencies and private companies, now focus on more routine criminal activity.

Peter Swire, a law and ethics professor at Georgia Tech who recently served on President Obama’s Review Group on Intelligence and Communications Technologies, said that as the government concentrated on fighting terrorism, guidelines that had restricted the monitoring of political activity were relaxed. As a result, he said, even minor offenses like trespassing “can be enough to trigger surveillance of political groups.”

Marsha Catron, a spokeswoman for Homeland Security, said that the fusion centers play an important role in helping law enforcement and emergency responders understand how to protect people during large public events. She added that the centers are required to protect privacy and civil liberties. Agencies receiving Homeland Security grants must follow guidelines similar to those adopted by that department, which forbid the collection of information “solely for the purpose of monitoring activities protected by the U.S. Constitution, such as the First Amendment-protected freedoms of religion, speech, press, and peaceful assembly and protest.”

The documents show that people connected to the centers shared information about individual activists or supporters, and kept track of those who speculated in social media postings that the centers had been involved when police departments used force to clear Occupy camps.

They also make clear that the centers appeared to take varying approaches to the protests. An intelligence officer at the Delaware center responded to an inquiry about Occupy with an email that said, “Our fusion center has distanced itself from the movement because of 1st Amendment rights and because we have not seen any criminal activity to date.”

A center in Nevada regularly sent out reports from more than a dozen cities that included descriptions of uneventful demonstrations and a“rally for jobs and justice” with the Rev. Al Sharpton.  Officials circulated descriptions of plans in Seattle for an anti-consumerist flash mob to dance to the rock anthem “Invincible.” Others monitored Facebook pages, noting events like a meditation led by Buddhist monks or a student march with participants dressed as “zombie bankers.”

The Boston Regional Intelligence Center, one of the most active centers, issued scores of bulletins listing hundreds of events including a protest of “irresponsible lending practices,” a food drive and multiple “yoga, faith & spirituality” classes.

The reports also listed appearances by people including a professor at the Harvard Divinity School, the linguist Noam Chomsky and an official at the American Civil Liberties Union of Massachusetts, who was to discuss the Patriot Act.  Some reports noted that a man scheduled to join in a teach-in at Dewey Square had written a film about Sacco and Vanzetti and wondered whether he was “a known/respected figure within the anarchist movement.” Others described Bill McKibben, an environmentalist and scholar at Middlebury College, stating, “McKibben organized a sit-in near the White House in August of this year to protest construction of a pipeline,” and was arrested but not charged.

At times, fusion center officials shared information produced by what Homeland Security calls “private sector partners.”  For instance, the head of the Washington police department’s intelligence fusion division sent an email to colleagues before Thanksgiving 2011 with an order to develop a “one-page product” to acquaint commanders with “the potential threat” described in a 31-page report prepared by the International Council of Shopping Centers.

The report examined protesters’ “attitude towards retail,” suggested that business could be disrupted on the day after Thanksgiving and listed several “specific known threats.” They included credit card detractors equipped with scissors at malls and posters offering “help for people who want to put an end to mounting debt and extortionate interest rates with one simple cut” and a group of people who had declared on a website that they would “intentionally forgo the shopping frenzy.”

Cathy L. Lanier, chief of the Metropolitan Police Department in Washington, said that officials who shared the report might have done so simply to prepare for all eventualities. “I wouldn’t consider anything in there as a threat,” she said. “But I can see the implications for planning purposes.”

Military employees also shared Occupy material. Two Defense Department employees, for example, regularly sent information to the fusion center in Washington or to a federal official connected to the center. One of them, an intelligence research specialist working in the threat analysis center of the Pentagon Force Protection Agency, circulated an email describing Google searches as “a very handy intel gathering tool” to keep tabs on Occupy protests. The other employee, assigned to the Defense Threat Reduction Agency, which addresses weapons threats, forwarded an email that included a link to an essay titled “What Police Should Be Learning From the Occupy Protests.”

Before distributing the message, the employee asked the sender whether it was “safe” to visit the site without hiding his computer’s identity.

Government Surveillance of the Occupy Protests

This is a link documents, distributed by people working with counterterrorism and intelligence-sharing offices known as “fusion centers,” are a selection from among about 4,000 pages of unclassified emails and reports obtained through freedom of information requests by lawyers at the Partnership for Civil Justice Fund, who represent Occupy participants. The documents, which they provided to The New York Times, offer details of the scrutiny of the Occupy protests in 2011 and 2012 by law enforcement officers, federal officials, security contractors and others. MAY 22, 2014