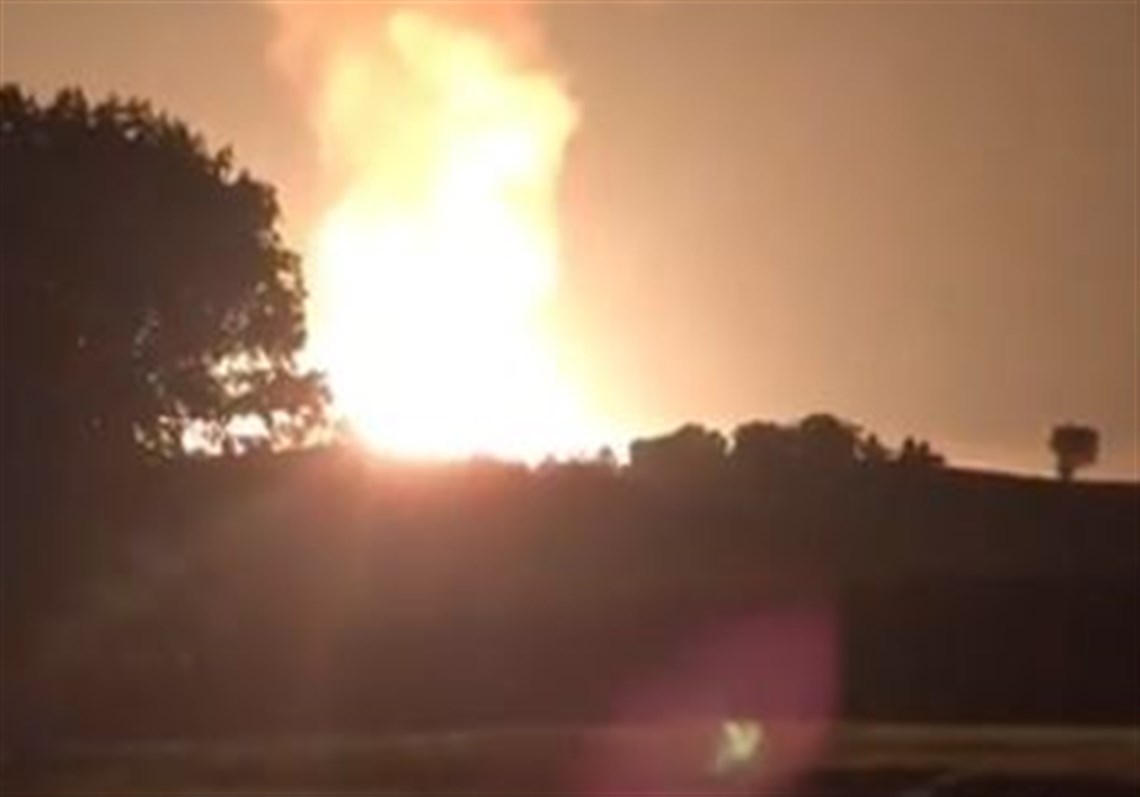 No injuries were reported Thursday after an explosion in a newly installed natural gas line near Moundsville, W.Va., shot flames into the sky that could be seen for miles.

“Thank God nobody is hurt. Everything else can be taken care of,” said Larry Newell, 911 director for Marshall County, W.Va.

His center was flooded with calls after the TransCanada gas line — on Nixon Ridge in a remote part of the area — exploded at 4:20 a.m.

TransCanada said in a statement that the cause was unknown and that it had a crew on the scene. The company said there was “an issue” with a pipeline on its Columbia Gas Transmission system in Marshall County.

“Our first priority is to protect the public and the environment. Emergency response procedures have been activated and the impacted area of pipeline has been isolated at this time,” the company said.

Officials with the West Virginia Department of Environmental Protection and the U.S. Forestry Service also were on site.

There was a boom followed by a roar, “like a big wind,” that lasted for about an hour, said Shark Martin, who lives about a mile from where the line ruptured.

The explosion woke him and he found the sky ablaze with colors, “almost like a rainbow.”

Right away, Mr. Martin said, he knew two things for sure: A natural gas pipeline had blown up and he was in no danger.

So he went back to bed.

“It’s happened around here before,” he said ticking off other pipeline explosions in the region in recent years. “They [also] had a well out there catch fire and it lit up the sky.

“It’s getting to where you look around and it’s like, there goes another one.”

His wife slept through the whole thing, as did his son and grandchildren, who live across the street from him, Mr. Martin said.

In the morning, Mr. Martin’s wife asked him why he hadn’t roused her to see the flames.

Tom Hart, Marshall County’s director of emergency management, said the line was shut down and the fire burned itself out by about 6 a.m.

“The fire department did not attempt to put the fire out,” Mr. Hart said. “They basically just secured the perimeter” and let the remaining gas in the pipeline burn, as is the protocol in such situations.

Companies that operate other pipelines nearby, some within a few hundred feet of the ruptured line, were also on the scene checking their assets, Mr. Hart said. Some of them also shut off the flow in their pipelines, he said.

Natural gas well operators also shut down nearby wells as a precaution, he said.

A few residents fled their homes voluntarily, Mr. Hart said, but there was no mandatory evacuation and the fire was at least a mile from the nearest residence.

Mr. Hart said he and other first-responders, during a debriefing later in the day, all marveled at how lucky it had been that the explosion occurred in a rural location with nothing but woods around.

The pipeline, known as the Leach XPress, was put into service in January. It’s 36 inches in diameter and has a maximum operating pressure of 1,440 pounds per square inch.

TransCanada had conducted what is called pigging work on the line last month. A pig is an instrument sent through the pipeline to clean it and collect data about its condition.

The company told its clients in postings that it would be pigging the pipeline between May 15 and May 24. It reduced capacity on the pipeline and at some compressor stations during that time.

After an initial run, the company notified customers it would need to extend its pigging work until May 25.

The results of those pig runs likely will prove valuable for inspectors at the Pipeline and Hazardous Materials Safety Administration, which was collecting data at the scene.

The Leach XPress spans 160 miles and, according to TransCanada, cost $1.6 billion to build.

In announcing its start in January, TransCanada president and CEO Russ Girling said: “This is truly a best-in-class pipeline and we look forward to many years of safe, reliable and efficient operation on behalf of our customers.”

The pipeline is part of a larger Columbia Gas Transmission system that has more than 10,000 miles of lines across Appalachian states, including about 2,000 in West Virginia and close to 1,700 in Pennsylvania, according to the Pipeline and Hazardous Materials Safety Administration.

In 2012, another Columbia Gas Transmission pipeline burst into flames in rural Sissonville, W.Va., just north of Charleston. The fire destroyed three homes, but no one was injured.

The cause was later determined to be external corrosion.

In 2015, a 2-year-old natural gas liquids pipeline burst in Follansbee, W.Va., sending a sizable fireball skyward. That incident has been brought up many times by pipeline opponents, most recently during a court case against the Sunoco Mariner East 2 project.

Last year, there was a fire at an EQT Corp. well site in Marshall County. Again, no injuries were reported.

Western Pennsylvania also has seen several explosive episodes in recent years, including a 2016 pipeline rupture in Westmoreland County that badly burned one man and destroyed his home. That Spectra Energy pipeline was found to have corrosion at the weld that burst.

Correction, posted June 7, 2018: In an earlier version of this story, the U.S. Forestry Service was incorrectly identified.