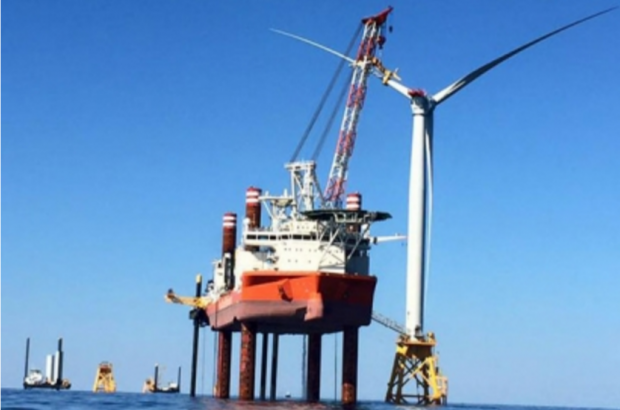 Building wind farms in the ocean is still more expensive than building them on land. But maybe not for much longer.

Some of these bids are coming in at grid parity prices as well. In a German auction in April, the average winning bid for the projects was far below expectations, with some bids coming in at the wholesale electricity price — “meaning no subsidy is required.”

“One caveat: these are prices, not actual costs,” McKinsey noted. “Until the parks are actually built and running, it is impossible to know if they can be profitable at these prices. But companies would not be competing so fiercely — the Dutch auction saw 38 bids — if they didn’t think they could be.”

But because offshore wind is at an earlier stage of development, “its prices can be expected to fall further, faster, thus improving its competitive position.” Indeed, McKinsey’s normalized wind farm data, which creates comparable figures for different sites based on water depth, site preparation, subsidies and other factors, shows how a combination of improvements could lead to projects in 2020 coming in at costs 68 percent below 2010 figures, as the following chart indicates.

Bigger turbines are a big deal, driving much of the cost reductions. Just last week, Vestas released its 9.5-megawatt offshore turbine, two to three times bigger than the standard turbines from only a few years ago By 2024, 13- to 15-megawatt models will likely hit the market, McKinsey predicts.

Improved logistics and operations and maintenance could translate into savings of as much as €10 per megawatt-hour in LCOE. Some of this involves a degree of cooperation across operators in sharing crew transfer vessels, helicopters and jack-up barges — specialized vessels with steel support legs that can be lowered to the sea floor to give them stability to lift heavy turbines. But “improved operations start with the relentless application of advanced analytics to improve predictive maintenance, condition monitoring, and component replacement,” McKinsey noted.

Contracting and procurement could add another to 5 to 10 percent in cost savings, a figure that’s actually being exceeded by the more adept wind farm developers today, McKinsey noted. “At several companies, this rigorous purchasing approach has translated into 15 to 20 percent price reductions in the procurement of turbines.” Improving project execution could cut costs by another 3 to 5 percent, and as for financing, each percentage-point decrease in the cost of capital brings a 5 to 10 percent improvement in LCOE for renewables.

Europe holds 90 percent of the world’s offshore wind capacity, giving it “a maturing supply chain, a high level of expertise, and strong competition,” the report notes. This European expertise is now being applied to other markets such as the United States and Asia, with the promise of cheaper and better-planned and -executed projects driving increased investor interest and government support.

In Asia, China has made offshore wind part of its five-year energy plan, and Korea and Taiwan are also considering offshore wind as part of their future energy mix, the report noted. “Although in some areas of the world, the LCOE of offshore wind may never become at par with, say, solar PV, the value it can bring — as less-intermittent baseload power generation near urban demand centers, offsetting supply deficits from solar PV in winter — can make it a valuable addition to the energy mix.”