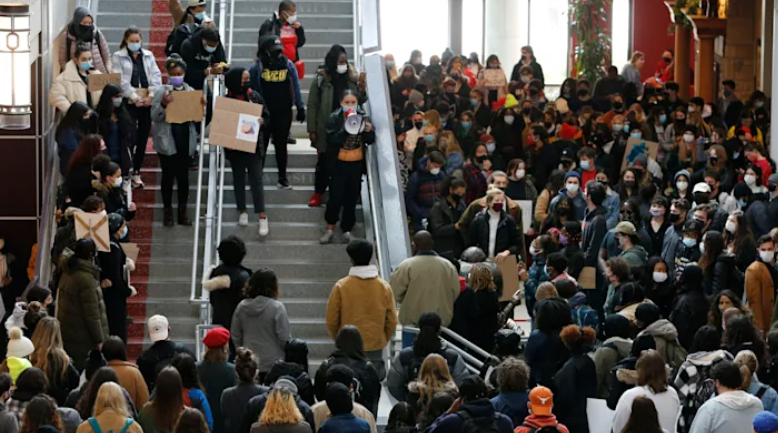 Above photo: Students gather at the Ohio Union on the campus of Ohio State University to protest yesterday’s shooting of Ma’Khia Bryant by Columbus Police Wednesday, April 21, 2021, in Columbus, Ohio. AP Photo/Jay LaPrete.

NOTE: There were few articles about this action taken by the students at Ohio State. Note that the article seems to justify the murder of Ma’Khia Bryant, but we have many videos of police de-escalating situations in which a white person has a lethal weapon without shooting them. Ma’Khia’s family reports that it was Ma’Khia who called police for help. In a video that goes with the article (not included with this post), the media goes so far as to find a Black neighbor who defends the murder by police. – MF

Ma’Khia Bryant, a Black teenager, was shot and killed in the city as police responded to reports of fight.

Students at Ohio State staged a sit-in protest and demanded that the university cut ties with Columbus Police in the wake of the killing of Ma’Khia Bryant.

The protest took place one day after a police officer shot and killed the 16-year-old girl in the city, just as the verdict in the George Floyd trial was reached.

Students staged their Wednesday protest in the Ohio Union before taking to the streets to march.

Some carried signs with the victim’s name, along with phrases like “say her name”, while another student had a sign that said, “Being Black shouldn’t be a death sentence.”

“Ohio State supports the right of our students, faculty and staff to peacefully express their views and to speak out about issues that are important to them,” the university said in a statement.

“Freedom of speech and civic engagement are central to our values as an institution of higher education.”

The university added that its own police force deals with campus security, and that they contract with CPD for specific services, mostly traffic control at sporting events.

Columbus police have defended the killing and named the officer involved as Nicholas Reardon.

Officials say that Officer Reardon has been a Columbus police officer since December 2019, and he has been placed on leave while the incident is investigated.

The body camera footage, which the department released within six hours of the killing, showed officers approaching a driveway at the home they had been called to.

There were several young women in the driveway, and one, now identified as Ma’Khia, appeared to have a knife in her hand and was approaching another young woman.

When the woman fell to the ground, Ma’Khia is seen moving towards another woman, who is against a car.

The officer then fired his weapon, with four shots being heard on the video, and Ma’Khia fell to the ground.