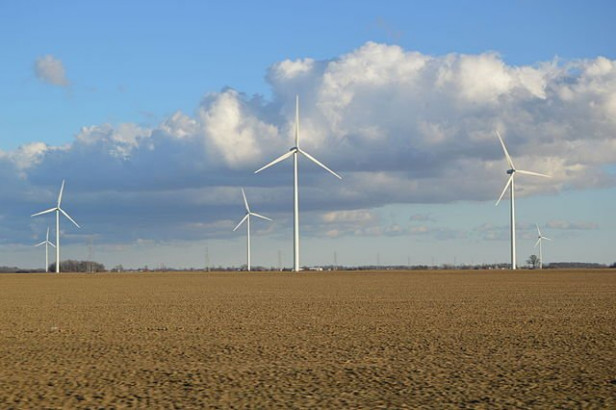 In the corporate war against renewable energy, a single Ohio regulation stands out.

It is a simple clause slipped into the state budget without open discussion, floor debate, or public hearings.

The restriction is costing Ohio billions of dollars and thousands of jobs.

The regulation demands that wind turbines sited in the Buckeye State be at least 1,125 feet from the blade tip to the nearest property line, about 1300 feet total—nearly a quarter-mile.

Ohio’s setback rule is similar to one in Wisconsin, where progress on wind power has atrophied. Lincoln County in South Dakota just passed a requirement that turbines be at least a half-mile from any residence. And Vermont is pondering a rule change to require a setback of ten times the turbine height, which in the case of a 500-foot turbine would be nearly a mile.

FirstEnergy, owner of Ohio’s two dying reactors at Perry and Davis-Besse, is now strong-arming the legislature and regulators for $4.5 billion in handouts to sustain two money-losing nukes whose electricity is far more expensive than what would come from currently approved wind projects, and whose 1,400-odd jobs would be dwarfed by the new turbine construction. Should the wind projects proceed, northern Ohio would be flooded with cheap, clean, reliable electricity that would push the two nuclear “mistakes by the lake,” as they’ve been called, even further outside the competitive pale.

FirstEnergy, owner of Ohio’s two dying reactors at Perry and Davis-Besse, is now strong-arming the legislature and regulators for $4.5 billion in handouts to sustain two money-losing nukes whose electricity is far more expensive than what would come from currently approved wind projects, and whose 1,400-odd jobs would be dwarfed by the new turbine construction.

Energy expert Ned Ford, based in southwestern Ohio, estimates it would take seven years or less for new wind construction to fully replace the production from Ohio’s two old reactors, and to do it at prices well below their current cost. A report by the American Wind Energy Association says proposed Ohio wind-energy projects could generate $4.2 billion in private investment, producing thousands of jobs in Ohio-based production, installation, and maintenance while generating billions in local income, much of it for badly stressed farmers.

Together, the cost to Ohio of this regulation adds up to $8.7 billion.

Proponents claim that tall turbines somehow threaten the value of neighboring properties. But the quarter-mile rule would thin out potential turbine installations to the point of making nearly all proposed wind farms economically unsustainable.

Ironically, northern Ohio has one of the world’s most potentially profitable wind regimes. The breezes coming down off the Great Lakes are strong and steady. The land is flat. The area is covered with access roads and established transmission lines. The power source is close to urban areas, such as Toledo and Cleveland, making transmission losses relatively marginal.

Major global wind companies such as Spain’s Iberdrola have long-since won approval for a fleet of Ohio wind farms whose capital investments range into the hundreds of millions, and whose construction jobs would be in the thousands, far outstripping the numbers working at the state’s residual reactors. Hundreds more jobs would come with long-term turbine maintenance.

According to Eric Thumma, director of policy and regulatory affairs for Iberdrola, the regulation “basically zones new wind projects out of Ohio.” That would include at least ten wind farms Iberdrola has had fully permitted since 2014, one of them with 304 megawatts of capacity, plus two more waiting in the wings.

Farmers in the region strongly support wind-energy projects. The footprint of a utility-scale turbine covers up just an acre of land. Farmers who host them lose a small fraction of their agricultural productivity, and access roads to build turbines can temporarily cost some crop space. But in many cases, once the windmills are in, farmers just plough over and plant those strips of soil on the usually safe bet that not much will go wrong.

Once installed, the turbines provide farmers with substantial lease payments that can even exceed what they make from actually raising crops other than electricity.

Farmers in the region strongly support wind-energy projects. Once installed, the turbines provide farmers with substantial lease payments that can even exceed what they make from actually raising crops other than electricity.

Ohio also stands to benefit from long-stalled projects slated for the middle of Lake Erie, where steady winds are among the world’s most powerful. Amidst relatively shallow waters, the sites, like those on land, are relatively close to major population centers. But while FirstEnergy beats up the legislature demanding billions in reactor subsidies, capital has been slow to flow to the offshore projects.

Recent attempts to rescind the anti-wind restriction are backed by some of the state’s strongest manufacturing, financial, and commercial interests. According to energy expert Ford, lifting the restriction could allow billions in currently stalled projects, and open the door to more. Even without the ones in the lake, Ford calculates that land-based turbines and solar panels could easily supply all Ohio’s electrical needs and make the state a major energy exporter.

In 2010, under then-Governor Ted Strickland, a Democrat, the Ohio legislature enacted a sweeping mandate in support of renewable energy. It was killed when Republican Governor John Kasich came to power and the GOP gained a death grip on both houses of the legislature. Many Republicans argued then (and now) that “market forces” should determine where Ohio’s energy will come from—while simultaneously demanding the uncompetitive reactors be bailed out and doing all they can to sabotage the influx of cheap renewables.

But according to the Union of Concerned Scientists, Ohio has more than sixtywind-related manufacturing facilities, more than any other state. In 2016, amidst a nationwide green power boom, that industry supported between 2,000 and 3,000 Ohio jobs, more than the 1,400 at Ohio’s two decrepit nuclear plants.

So the death of Ohio’s renewable energy mandate has not only cost it cheaper long-term electric rates and countless installation and maintenance jobs, it continues to cripple the domestic infrastructure poised to produce much of the hardware for the state’s own wind farms.

It’s a lose-lose proposition. The people of Ohio deserve better.

Harvey Wasserman’s most recent piece for The Progressive is “The Unstoppable Green Power Revolution.” He is author of Solartopia! Our Green-Powered Earth and co-author, with Dan Juhl, of Harvesting Wind Energy as a Cash Crop.