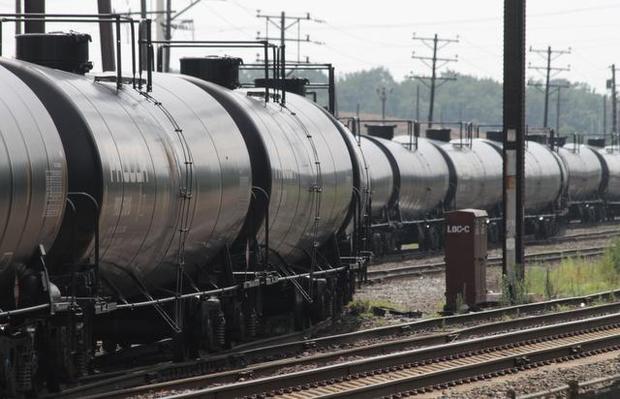 WASHINGTON — None of the tank cars currently in service carrying Bakken crude oil is adequate for carrying that product, a rail industry representative testified Tuesday, but until new federal regulations are completed, the use of inadequate cars will continue.

That includes tank cars built to higher standards adopted by the industry since 2011. Such cars have failed in at least two recent derailments. Yet in the absence of the new rules, crude oil shippers and refiners continue to rely on them to meet the demands of North America’s energy resurgence.

In testimony opening a two-day hearing at the National Transportation Safety Board, rail companies and rail car makers agreed that crude-by-rail shipments would continue to grow.

The NTSB long ago recommended improvements to the industry’s workhorse DOT-111 model tank car, which have proved vulnerable to punctures and ruptures in numerous accidents over the years involving hazardous materials.

Expert witnesses testified that the industry knew it needed better cars before a deadly accident last summer in Quebec. The industry asked the Department of Transportation for tougher standards in March 2011, but rather than wait years for new regulations, it made voluntary improvements.

Manufacturers began building cars to a new industry standard, called CPC-1232, later that year. But the production of crude oil in North Dakota’s Bakken shale region surged so fast in 2012 and 2013 that tens of thousands of older cars were pressed into service.

The NTSB already had warned that the DOT-111 cars were poorly suited to transport ethanol when they began hauling large volumes of equally flammable Bakken crude.

“How did it get missed for the last 10 years?” asked NTSB Chairwoman Deborah Hersman. “Did it take body counts and derailments for us to understand that there’s an issue?”

In Lac-Megantic, Quebec, 47 people were killed when a train loaded with Bakken crude crashed into the town center and burned with such intensity that some victims were never found. More than 1.2 million gallons of Bakken crude were spilled in derailments in Alabama and North Dakota, and though no one was injured or killed, the derailments ignited massive fires that overwhelmed the capabilities of local emergency responders.

William Finn, vice chairman of the tank car committee at the Railway Supply Institute, said that 95,000 DOT-111 cars would need to be retrofitted to comply with the coming regulations, including 55,000 newer cars.

“This is going to be a huge undertaking,” Finn said. “Historically there has never been a bigger retrofit program than this.”

Major refiners, including Tesoro, Irving Oil and PBF Energy, have committed to shipping crude only in upgraded cars. Valero Energy and Phillips 66 are buying their own fleets, or 4,000 cars combined.

But even those cars may not be robust enough to account for Bakken oil’s volatility. Finn testified that Bakken contains high levels of flammable gases, which if transported on their own would require pressurized tank cars designed for it.

For the most part, railroads don’t own tank cars, which are leased to the companies that use them. But in February, BNSF Railway, the largest hauler of crude oil in trains, took the unusual step of buying its own fleet of 5,000 cars. The cars will be built to a higher standard than the current, industry-adopted one.

Tuesday’s testimony showed harmony between railroads and tank car manufacturers on major improvements, including the need for full-height shields to protect the ends of cars from punctures and thermal insulation to make them more fire resistant.

Railroads want thicker tank walls of 9/16ths of an inch to provide extra protection for the cargo, but tank car makers and petroleum producers are concerned that the extra weight would mean that less product could be transported in a single car. They prefer walls of 7/16th of inch thick.

The Pipeline and Hazardous Materials Safety Administration could settle the dispute with its new regulation, but the agency did not testify Tuesday on when it might be finished. Any new regulation will have to be reviewed by the Office of Management and Budget, a process that could add months to the wait.

“Engineers deal with uncertainty by adding a margin of safety,” said Greg Saxton, senior vice president and chief engineer at the Greenbrier Companies.