Above Photo: Okinawa activists protest outside of White House on January 7./Photo by Robert Kajiwara

Washington, DC — Peace activists are calling for the U.S. government to call off plans for a massive military construction project on the Japanese island of Okinawa. On January 7, a fourth generation Okinawan-American and local peace groups staged a demonstration and delivered a petition with 190,000 signatures to the White House. The petition calls for a halt of construction of a U.S. airbase at Ourawan Bay until a referendum can be held on February 24.

The airbase would build an airstrip by filling in Ourawan Bay with boulders and dirt. Two 5,000-foot runways are planned which will eventually house the ultra-advanced U.S. F-35 fighter jets and V-22 tiltrotor aircraft. The bay is a pristine tropical water paradise and home to many rare aquatic species, including the Dugong, an endangered rare marine mammal.

Construction over the bay began on December 18. The project has the backing of the mainland Japan Premier Shinzo Abe.

Opposition to Futenma airbase and its relocation from Ginowan to Henoco District on Ourawan Bay dates back several decades with nearly 80 percent of Okinawans opposed to it. The specifics of the plan call for building the airstrips at the edge of Schaub Marine Base, a base camp for Marine infantry units rotating between South Korea, Guam, Mainland Japan, and the U.S. West Coast.

Environmentalists say the Dugong marine mammal feeds on lush beds of marine grass within Ourawan Bay, but the new airbase will further endanger its existence there. By filling the bay with rocks to build two runways and a mile-long sea wall, the base will bury the lush source of sea grass, the home of the Dugong and many other rare species.

Okinawa has been hampered by the presence of remnant U.S. base relics since World War II.

Okinawa Prefecture is the southern most part of Japan which was annexed in 1879. Before it was annexed it had already established an island culture and autonomous Kingdom of the Ryukyu government for several centuries. It was the central part of the 1,000-mile chain of the Ryukyu Islands before Japan annexed it.

The island saw almost total destruction in WWII during the battle of Okinawa as Marines landed and fought against Japanese soldiers. Almost 25% of its people were killed and every building was either destroyed or damaged. After the war Okinawa remained under U.S. administration until 1972. It was then given back to Japan’s control in March 1972, nearly 100 years after Japan annexed it. However, the U.S. maintained possession of a series of bases, including Futenma airbase. 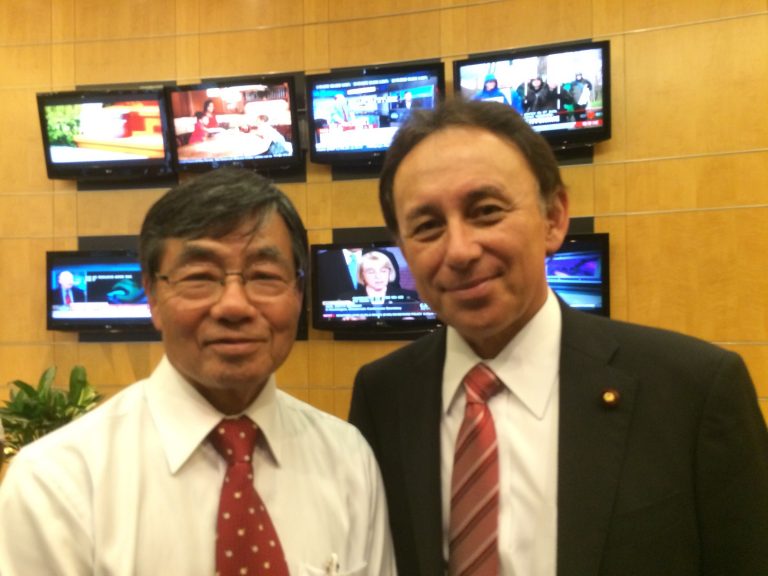 susumu Inamine, the Mayor of Nago, and Denny Tamaki vitisted the U.S. in 2014 to advocate for the removal of Futenma airbase and relocation of Henoco airfiled to mainland Japan. Tamaki is no the Governor of Okinawa. Photo/John Zangas

During the 1970s and 80s, the population grew as did tensions with the U.S. over incidents of assaults by U.S. military personnel. Okinawans urged mainland Japan to relocate Futenma airbase to the mainland and reduce U.S. military presence. They grew increasingly impatient for U.S. bases to be closed and the land to be returned to them. Civil disobedience and resistance grew out of plans to relocate Futenma airbase to Ourawan Bay which was announced in 1995.

The original plan was to move Futenma to Henoco by acquiring private property inland but not over Ourawan Bay. The early plan was part of a secret proposal in the 1960s (since declassified) by Defense Secretary Robert McNamara during President Kennedy’s administration. In the 1970s and early 1980s, this plan met opposition as Okinawans began to mobilize in opposition.

Once the second plan was publicized in 1995 to build the base over Ourawan Bay, Okinawans organized protests, sit-ins and day-long blockades outside Futenma and Schaub bases until police moved in. They have even launched water flotillas on Ourawan Bay as the Okinawa resistance took to kayaks in pitch battles with construction personnel.

The resistance was originally fighting to close the base. But once the relocation plan to move Futenma airstrip to Ourawan Bay was made public, the blockades of Schaub Marine Base near Henoko became more intense. And they have sustained a spirited resistance ever since. They have organized marches, voted only for local candidates opposed to the Henoko project, blocked base entrances and sent delegations to the U.S. to urge cancellation of construction plans. Mayor Susumu Inamine of the city of Nago and then Japanese Congressman Denny Tamaki visited the U.S. in 2014 to urge President Barack Obama to cancel the project but was unable to meet with him. Denny Tamaki was elected as Governor of Okinawa in 2018 on a platform to block Henoco base construction. Tamaki visited the U.S. again in 2018 to lobby for U.S. base closures.

Robert Kajiwara, a fourth-generation Okinawan-American, organized the online petition which gained 190,000 signatures. A human rights activist and musician, he has worked to build international support to stop Henoco Base. He wrote lyrics about the struggle in Okinawa to the John Denver song “Country Roads.”

His lyrics resonated with Okinawans and attracted international support. He believes music is an effective way to reach people through emotions. It has also been his way of helping to gain support for his fellow islanders and pay back his grandparents for their support for his education in Hawaii.

He delivered the petition to the White House on Monday hoping to urge the Trump Administration to cancel the project. But he believes Americans also have an important stake in the new battle for Okinawa.

“There are a plethora of reasons why this base is bad for America, and I am trying to bring these reasons to their attention,” said Kajiwara. He says the project will also hurt Americans by costing much more money than previously estimated.

An analysis of military plans show the project has ballooned to $23 billion, more than 10 times the original cost estimated in 2013. It will also take five years longer to complete the Ourawan Bay fill and stabilization process that was previously estimated at 5 years. This is due to a discovery by civil engineers that Ourawan Bay contains sediments that are much more soft than previously thought. The ancient coral reef geology under the coastal water is not supported by the heavy loads of an airbase so the fill dirt project will take more time to reinforce, the report claimed. There is also the consideration of periodic earthquakes which could cause subsidence under the base and have to be remedied.

Kajiwara said there are many stories about the elderly protestors that have yet to be told, and he wants to help them share stories with the world. He spoke of two elderly protesters who were arrested and charged with felonies. He believes they were targeted because of successful organization efforts. “Hiroji Yamashiro and Hiroji Inaba are two of the most prominent leaders of the movement, and they were arrested and sentenced as felons for their protests. They recently filed an appeal, but their appeals were denied,” he said.

Dozens of elderly protesters are forcibly moved on a daily basis. Their resistance has taught the younger generations about non-violent protest and delayed the Henoco airbase project by two decades.

One of the issues Okinawans must also contend with is polluted water from over 70 years of U.S. military operations. Water quality has been effected with fuel spills, fire drills from fire-retardant foam, grease and solvent and petroleum runoff from military operations.

Kajiwara is hopeful the base can be stopped even though construction began in Ourawan Bay a few weeks ago. He cites the tenacity of Okinawans, their love of each other and their concern for the environment as strengths. “They have been fighting for decades, and they’re not going anywhere,” he said.