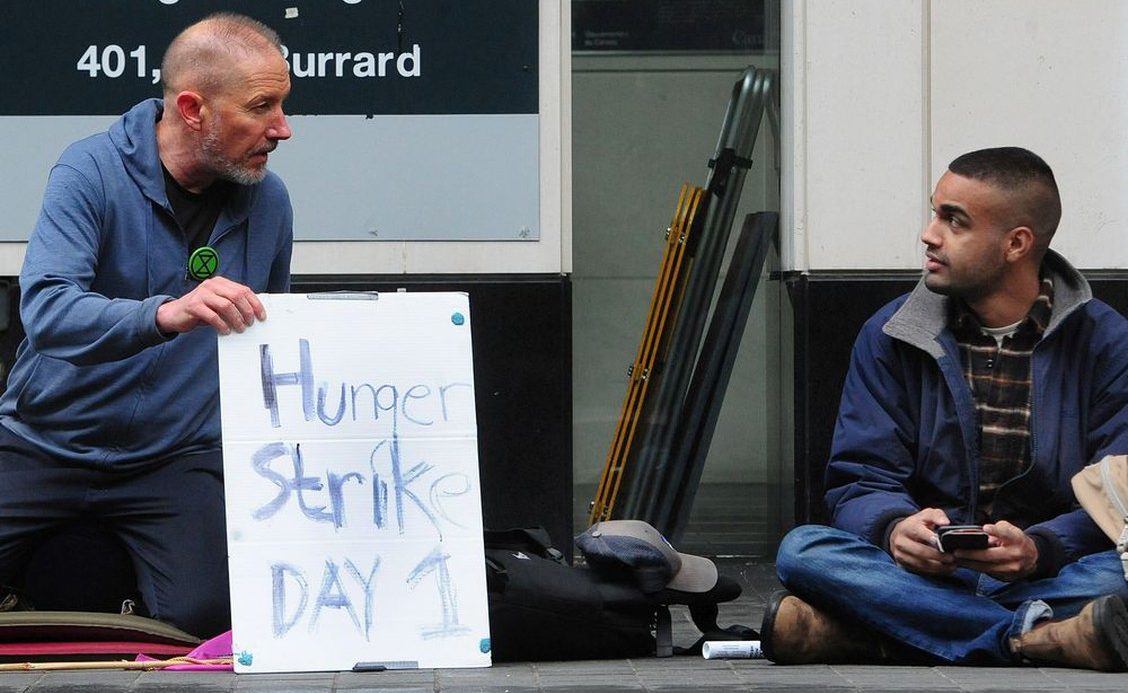 Old-growth logging protesters on day seven of a hunger strike are calling for an urgent meeting with B.C. Premier John Horgan and Forests Minister Katrine Conroy.

Brent Eichler, president of Unifor local 950, Zain Haq, a 20-year-old student at SFU, and Evie Mandel, 65, haven’t eaten food in a week but are continuing their strike at 401 Burrard Street in Vancouver.

Reached by phone Saturday, Eichler said they were doing OK but very tired from only consuming water, lemon juice, and salt. He said he wasn’t sure how much longer they could continue without suffering adverse health effects.

Eichler said they have received a lot of support from young people and those who want a moratorium on logging old-growth forests.

The trio, who are members of the environmental group Extinction Rebellion, say they haven’t heard from anyone at the NDP but they did receive a call from B.C. Green Party Leader Sonia Furstenau.

“Sonia was gracious and kind,” said Eichler. “She asked how we were and what she could do to help. She offered advice regarding reaching the MLAs, answered my questions and talked at length about the seriousness of the climate and ecological emergency.”

They are also hoping to talk to federal Minister for Environment and Climate Change Jonathan Wilkinson, and are asking for “a respectful dialogue on the state of old growth logging and establish a citizens assembly to oversee the reduction of carbon emissions to net zero by 2025.”

The hunger strike is in solidarity with the protesters trying to stop logging at the Fairy Creek watershed near Port Renfrew.

On Friday, two more protesters were arrested for civil contempt of court after they were removed from various locking devices attached to a log.

The RCMP have arrested 246 individuals since the start of the injunction May 18, including at least 10 who were previously arrested.

Of the 246 arrested, police said 199 were for civil contempt of court, 42 were for obstruction, four were for mischief, and one for counselling to resist arrest.

Opponents of old-growth logging have been blockading logging roads near the Fairy Creek watershed on western Vancouver Island since August 2020.

The dispute has reignited a debate on whether there should be a moratorium on logging B.C.’s ancient forests.

The Fairy Creek watershed is part of Tree Farm Licence 46, a 59,000-hectare timber harvesting tenure held by private logging company Teal Jones. Since last year blockades have spread out to other sites within the licence area, including the Caycuse watershed, home to 1,000-year-old yellow cedars.

Teal Jones said in a statement Friday that most of the work in Tree Farm Licence 46, where blockades are in place, is in second-growth forest.

“We do cut a modest amount of old growth as well, as it has characteristics needed for many value-added products such as musical instruments,” the company said.

The company also noted the province removed several large areas from the tree farm licence in the 1990s to set aside as parks, including what is now the 16,500-hectare Carmanah Walbran Provincial Park.

The B.C. Council of Forest Industries has said old-growth logging supports an estimated 38,000 jobs in B.C. and contributes approximately $3.5 billion to the province’s gross domestic product.

There are 3.6 million hectares of old-growth forest available for logging on public lands in B.C. and 50,000 hectares, an area more than eight times the size of Manhattan, are cut every year.

“This is the most difficult thing I have ever had to do but our demand is urgent, which is why we are taking extreme measures,” said Haq.

“We want to eat, but we will wait for them. We simply wish to engage in respectful dialogue”.

Added Eichler: “I am refusing to put food in my body because we are facing mass starvation in a matter of decades, due to the impacts of the climate and ecological emergency.”

Mandel said she is participating in the hunger strike because she does not want to be part of a system based on exploiting nature and the First Nations.

“My hunger seems trivial compared to the ongoing loss of ancient trees and their habitat, at a time when we need them to generate our air and hold carbon for us. Thinking of that keeps me strong for this,” said Mandel.