Bent Mountain, VA – On Wednesday, June 30, 2021 at 5:30 A.M., Deborah Kushner, Alan Moore, and Bridget Kelley locked themselves in and to a broken down vehicle on Honeysuckle Road, blocking Mountain Valley Pipeline’s access to the pipeline easement, a work yard, and 2 access roads. Written on the vehicle blockade are slogans including: “Old Hills & Old Folks Resist,” “Protect What You Love,” “McAuliffe’s Climate Catastrophe,” “Land Back,” and “Water Is Life.” Nearly 20 people rallied on site in support of today’s blockade. 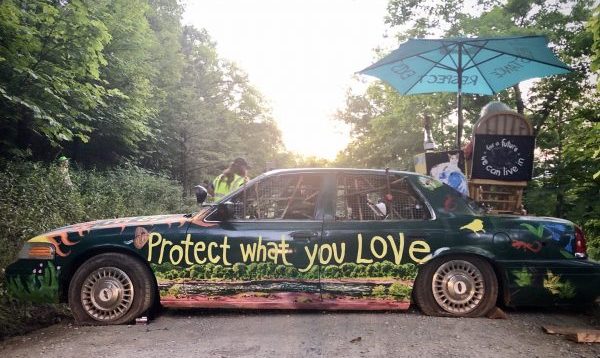 At 12:45 P.M., law enforcement issued a dispersal order for the rally of supporters. By 2:30 P.M., they began extracting the 3 folks locked to the blockade vehicle. As of 5:30 P.M., Alan and Deborah have been extracted and are in police custody after 12 hours blockading Honeysuckle Road. Bridget remains locked to the vehicle blockade as law enforcement works to extract her. Supporters rally at the end of Honeysuckle Road.

Deborah Kushner, a 66-year-old retired mental health worker and central VA resident, stated: “My presence here today is just a small gesture of dissent. It’s what I can do to delay – even for a few hours – the march towards assured oblivion. […] My action today is very much out of my comfort zone. I’m compelled to act because we are out of time. Protecting the health and safety of our water, air and land is critical because our laws, regulatory agencies and courts don’t protect it. They don’t protect us from renegade, profiteering industries destroying the planet. […] My stand today is for a future in which we all can thrive.”

Alan Moore, a 57-year-old environmental scientist and Blacksburg resident, stated: “We act in solidarity with intention to protect what we all love: the water, the air, the mountains, and the beloved community of communities to which we all belong, the web of life. All we can do is remain firm and say ‘NO!’ when they come to take from us. […] Many who have acted in opposition to the insanity of a 21st century fracked gas pipeline have been attacked, arrested, brutalized, and dragged into a costly and dehumanizing legal system. Each of us deeply feels the ache of living in the Appalachian sacrifice zone.”

Bridget Kelley, a 63-year-old central VA resident, stated: “Since 2014, I have done everything in my legal power to stop this pipeline from the destruction it wields, but all to no avail. The hoops we jumped through were only that, hoops to satisfy the lie that we are being careful with our resources for our future existence. We are not. Our government has not been structured in a way to help us preserve what is essential to live and that which strikes our very souls with its beauty. We have to stand up for our rights. Come and join us. Currently the MVP construction is 3.5 years behind schedule, is $2.7 billion dollars over budget and still lacks final approval for key permits like the water crossings along the route. This pipeline is not a done deal. I believe that we will win. Together we can and will win.”

The Mountain Valley Pipeline is a 42-inch diameter, 300-plus mile, fracked gas pipeline that runs from northern West Virginia to southern Virginia, with a 70-mile extension into North Carolina (the Southgate Project). If completed, the MVP would be responsible for nearly 90 million metric tons of annual greenhouse gas emissions, equivalent to the emissions of 19 million passenger vehicles or 23 average U.S. coal plants annually (source: Oil Change International). It contributes to climate change, increased demand for natural gas (and as a result, fracking) and is entrenched in corrupt political processes. It endangers water, ecosystems, and communities along its route. Staunch resistance to the pipeline has existed since its proposal in 2014.

The failing pipeline is 3.5 years behind schedule, several billion dollars over budget and still missing permits including those needed to cross streams, waterways, and the National Forest. In April 2021, the North Carolina Department of Environmental Quality reaffirmed its denial of a water quality certification for the Southgate Project portion of the MVP. On July 7 2021, the Virginia State Air Pollution Control Board will hold a public hearing in Richmond at 10 A.M. as part of their consideration for an air permit for the Lambert compressor station. The compressor station (also part of the Southgate Project) is proposed to be located 1 mile from an existing compressor station for the Transco Pipeline in the Banister District of Pittsylvania County, which is a rural, majority Black community. With the extent of public disapproval and the setbacks in the project, many see the Mountain Valley Pipeline’s failure as inevitable.

Today, pipeline protester Acre is still being held in jail after being sentenced on misdemeanor charges for their role in the Yellow Finch tree sits, which blockaded the path of the Mountain Valley Pipeline for 932 days.