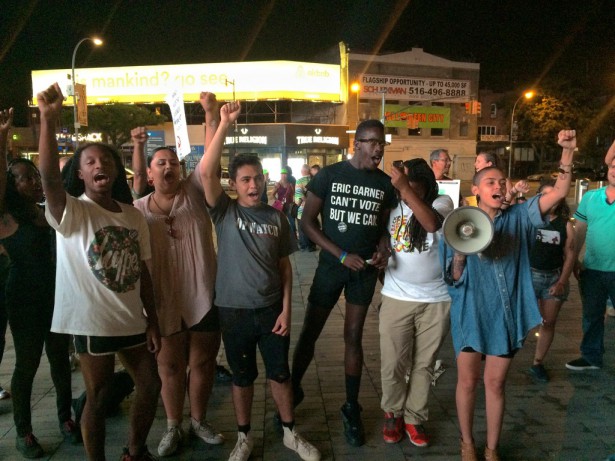 On 4th Anniversary OWS Takes To The Streets

Above: Protesters outside the Barclays Center in Brooklyn on September 17. (WNV/Ashoka Jegroo)

Hundreds of protesters in New York City took to the streets on September 17 in a variety of actions against racism, gentrification and police brutality. The day marked the fourth anniversary of Occupy Wall Street with actions taking place in at least three boroughs.

“We had a day of action that was around racism, police brutality and anti-gentrification specifically because we needed to have a way to be very intersectional about all of what’s happening in our communities,” said Imani Henry, an organizer with Equality For Flatbush. “Gentrification is about landlords, corporations, the de Blasio administration, [Brooklyn Borough President] Eric Adams, and every borough president who is allowing developers into our neighborhood. It’s about community boards, re-zoning issues and struggles that we never ask for. And it’s also about the cops occupying our neighborhoods.”

According to a study by the Community Service Society of New York released in June, rents citywide rose by 32 percent from 2002 to 2014 even after removing the effects of inflation. Many of the biggest increases in rent occurred in communities of color in central Brooklyn and uptown Manhattan. These drastic rent increases, coupled with more aggressive policing, are what often lead to the displacement of poorer communities of color in favor of more affluent, young white residents. The amount of apartments that are affordable to low-income households has also decreased by 44 percent citywide since 2002. These trends have made much of New York City simply unaffordable for poor and working people.

“I organize because I recognize that, as I walk into a neighborhood that I’m actively gentrifying, there are people who have lived there long before I have lived there who have been suffering and struggling in that neighborhood who I need to be actively struggling with and supporting,” said Jose Garcia, an organizer with the Brooklyn Anti-Gentrification Network. “The way that I support that is by fighting against police brutality, fighting against corporations, and fighting against the New York City developers who are actively involved in pushing and shoving a lot of communities of color out.”

While a small group of former Occupy Wall Street protesters gathered at Zuccotti Park in the afternoon to reminisce, activists with the Brooklyn Anti-Gentrification Network, a coalition of dozens of grassroots groups, were up early in the morning handing out fliers in Brooklyn for the day’s events. Along with a full day of actions, the group put out a list of 10 demands concerning housing and inequality. At around noon, Families United for Racial and Economic Equality protested in front of the New York City Housing Authority management office at the Farragut Houses.

At 2:30 p.m., the Brooklyn Anti-Gentrification Network held a press conference at City Hall, where speakers criticized the mayor and other elected officials for their participation in the future gentrification of New York City. The protesters then protested outside the New York City Department of City Planning.

At 5:30 p.m., the protesters began to rally at Canal Street and Bowery near the Manhattan Bridge. The New York City Police Department, particularly its anti-protest Strategic Response Group, was also waiting at that spot in full force and surrounded the protesters on all sides. Meanwhile, in Staten Island, activists protested and chanted “I Can’t Breathe” outside a softball game between Mayor de Blasio’s administration and members of the New York City Council, blocks away from where Eric Garner was killed by police last year.

Back at the Manhattan Bridge, at around 7 p.m., 100 or so protesters began to march on the pedestrian walkway over the bridge to Brooklyn with NYPD above and behind them. Chants went back and forth from being anti-landlord to anti-rent to anti-police, as the protesters made their way across the bridge and toward the Barclays Center, a sports arena that has become a symbol of Brooklyn’s gentrification. Once they arrived at Barclays, the protesters had a rally and speakout.

“We came to Barclays because I would love to see our community here,” Henry said. “Downtown Brooklyn was a black and brown area. I’ve lived here 20 years, and when I walk, I have to waive at black people like ‘Hi! How are you? I have not seen you in so long!’ in downtown Brooklyn because at this point they’re like ‘Get out!’”

Multiple speakers then addressed the protesters in front of Barclays, as they discussed ways that people, especially gentrifiers themselves, could aid the struggle. Some of the methods people suggested to fight back against gentrification included shopping at local stores and restaurants, interacting more with veterans of the community, and even moving out completely. After some speeches and chants, the protesters held hands in a circle and wrapped up the night with a chant from Assata Shakur. They also began making plans for even better actions in the near-future.

“What’s next is really making sure that whatever action we plan, whatever demonstration we hold, we have more people, more organizations to truly help us uplift the message,” Garcia said. “There’s a lot of talk of white people who are gentrifying Brooklyn, which is really true, but that’s not it. There’s other people, other communities that are also coming in, pushing out more impoverished people of color and so we really need to be held accountable for that. And people need to make sure that, as we live in the system we’re forced to live under, we ask, ‘What are some ways that we can fight it and resist it?”

Ashoka Jegroo is a journalist born and raised in Brooklyn, New York. He has bylines inThe Santiago Times and the New York Times’ The Local blog. He has covered protests in Santiago, Chile and New York City. When he’s not causing trouble for the establishment, he’s live-tweeting protests at @AshAgony.