On 65th Anniversary Of Korean Truce, Activists Criticize US For Delaying Real Peace

Above and: South Korean ‘Youth Resistance’ protests at the US embassy in Seoul demanding a permanent peace treaty and normalizing relations with North Korea. 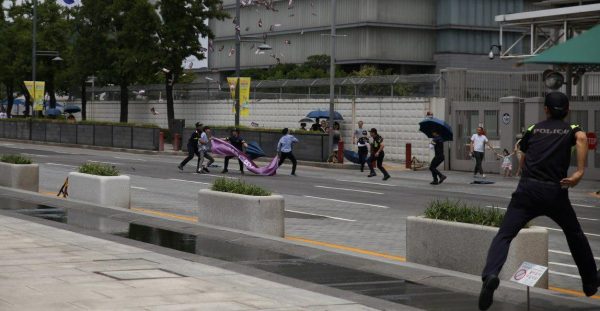 South Korean peace and justice activists have been writing to us at Popular Resistance complaining that the United States is not responding to the positive steps being taken by North Korea before and after the meeting between President Trump and Chairman Kim. They have sent us information about protests they are organizing in South Korea aginst the United States as well as in Washington, DC.

Their views show a great divide between the United States and the calls for a permanent peace which includes removal of US troops as just last week the Congress passed a National Defense Authorization Act which forbids removal of US troops from Korea. The John S. McCain Act states the “significant removal” of US troops is “a non-negotiable item as it relates to the complete, verifiable, and irreversible denuclearization” of North Korea..

The activists argue that the temporary halt in war games which practice nuclear and other military attacks on North Korea are insufficient. They want to see movement toward a real peace treaty and removal of economic sanctions, especially allowing South Korea and North Korea to normalize relations. And, they want US military forces out of Korea, permanently.

On July 27, in a protest in front of the White House, South Korean activists claimed the June 12 agreement between North Korea and the United States called for normalizing relations between North Korea and the US and establishing a permanent and solid peace regime in Korea. They believe that to conclude North Korea-US peace treaty includes withdrawal of the US military from Korea as the core. They call on the Trump administration to fully implement the June 12 declaration and immediately withdraw US troops from South Korea. They pledge all-out national resistance against the United States, to advance the realization of the world where US troops are withdrawn, the Korean people are masters of their country, and the nation is reunified.

They report on a protest held at the US embassy in South Korea on July 29th. Two members of Youth Resistance, “a democratic peace group of patriotic youths formed in October last year for anti-war, peace and national independence,” strongly condemned the United States for its continued military presence in South Korea. This was the ninth protest they have held at the US Embassy in Gwanghwamun next to the Seoul Museum of History.

In the protest, Seo Hyeong-hoon and Min Ji-won rushed toward the US embassy shouting slogans demanding the United States to get out of South Korea. They unfurled a banner that said “Permanently Withdraw United States Forces in Korea” and threw leaflets into the air. Police violently responded, Seo Hyung-hoon head was pushed onto the ground, his arm held backward, and his face slammed to the ground by the police. Allies at the protest witnessed the violence and took photos and video. Theey report that these events were witnessed by many foreign tourists in the area.

The two peace advocates were taken into custody and brought to the Jongno Police Station. They and their allies are protesting against violent suppression of legitimate demonstrations.  The two protesters condemned the US for failing to fulfill the June 12th Singapore Declaration signed by President Trump and Chairman Kim. Protests were held throughout the night to get them released from custody.

“North Korea has not carried out nuclear tests and missile launches in the past nine months. They have abandoned thePunggye-rie nuclear test center and released three American criminals. In contrast, the US has done very little beyond the temporary and conditional interruption of war exercises. No action has taken place on the threat of US nuclear missile attacks. The US is preventing progress on substantive dialogue with their excuse that a denuclearization timetable is needed. Trump’s actions show he did not genuinely engage in this dialogue, as the sanctions for North Korea have been extended for another year.

“The United States has made a military colony in South Korea and established a puppet regime. We seek peace for our nation and the people of Korea.  We want a peace treaty that will last and defeat US imperialism. We understand these high-level talks will not develop on their own and the people must take action. We seek peace because we will be the first to be hit by a US military attack. Our destiny should not be controlled by the presidents of the other countries. We are our own masters and must struggle with our voices and actions to achieve a lasting peace.  There is no peace without a peace agreement that includes US military forces leaving the country!”

They argue that the US must convert the unstable armistice agreement to a stable peace treaty. Under Clause 60 of Article 4 of the Armistice Agreement that was signed on July 27th, 1953, it says that within three months a conference of both sides will “settle through negotiation the questions of the withdrawal of all foreign forces from Korea, the peaceful settlement” of issues between the countries. Instead, on October 1st, the US signed a mutual defense treaty with the South Korean government which neutralized the armistice agreement and institutionalized the long-term presence of the US military.

After the embassy protest, Youth Resistance member of the Min Ji-won said,

“It has been a month since the meeting between President Trump and Chairman Kim in Sentosa Island, Singapore, but there is still tension with the United States. We strive for the promise of a new relationship, a permanent and solid peace regime. North Korea has canceled the Punggye-rie nuclear test site and returned US military soldiers remains. What is the US doing in return?

“In 1945, when the Korean people enjoyed the joy of liberation from Japan, the United States entered our land as an occupying military force. Since then, their unilateral occupation has continued. The United States joined the armistice agreement, which was signed on July 27, 65 years ago. As long as US forces remain on this land, the pain of the war will not disappear and our people cannot achieve justice. The Koreans are no longer deceived by the United States, which is pouring cold water into the atmosphere of peace and unity.

“It is US soldiers who undermine our independence and democracy which are the long-time desires of the Korean people. US military abuses are not being overlooked by Koreans, no matter how much they try to hide their aggression and violations of human rights. Our people are no longer deceived by the United States. Now that the people’s aspirations for unification are swelling up, US forces must leave the country. It is time to write a new history that will mark the end of the 73-year-long history of the United States trampling on Korea. Youth Resistance is on the path of glorious struggle to demolish US forces and open the horizons of self-reliance, democracy, and unification. Youth activism reveals the light of the nation and our passion shows the pulse of the nation to rise against US militarism.”

On July 27, at dawn, Lee-Jeok who is the permanent representative of Peace Treaty Movement Headquarters and others held a candlelight ceremony of the General MacArthur statue. The Korean people rage against MacArthur as he came to South Korea as the occupier in 1945, divided Korea, and threatened a nuclear attack in the Korean War. Following the ceremony, a coalition of groups held a rally in front of the US Embassy to demand the immediate signing of a Peace Treaty and permanent withdrawal of US military forces.

At protests are occurring in South Korea, the People’s Democracy Party has been conducting demonstrations for 122 days in front of the White House and at the US Embassy. The head of former Peace Expedition to USA Lee Sang-hoon said, “The Max Thunder war games must permanently be suspended. The peace agreement with the United States must be concluded!. The US Army must leave Korea”