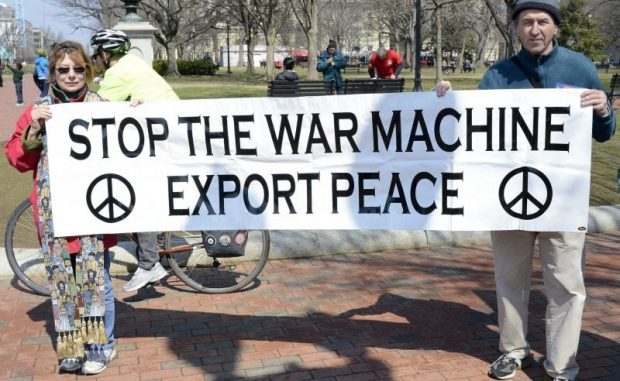 On Armistice Day, Work For And Celebrate Peace

Today is Armistice Day – the day that World War I, a brutal and devastating war, ended. After World War I, people hoped nothing like that would ever happen again and a large peace movement developed in the United States. Sadly, just over two decades later, World War II began.

The US arose in the aftermath of this second terrible war as the global power. In 1954, Armistice Day was changed to Veterans Day to celebrate all veterans. Now, veterans are pushing to change it back to Armistice Day and to celebrate those who work for peace and justice, not war.

“Those who care about equality and justice have no use for Veterans Day, as it is currently defined. Recently, an increasing number of states and communities are replacing Columbus Day with Indigenous Peoples’ Day, making it a day to celebrate Indigenous peoples, not conquest and genocide. Likewise, Veterans Day needs to be expropriated and redefined to celebrate veterans of a different sort: It’s time to change Veteran’s Day back to Armistice Day, making it a day to celebrate those who struggle for justice and peace.”

Last year, we organized the Peace Congress in Washington, DC, which brought together people working to end the wars abroad and at home. We also joined Veterans for Peace the next day in their call for a return to Armistice Day and marched with them through the Mall.

This year, we are in Palestine meeting with activists and learning the history of “The 48” and how the genocide and apartheid continue today. We started in Jaffa yesterday where we met with Omar, a representative of Zochrot.org, which he translated as “the remembering.” Zochrot documents the forced expulsions of Palestinians so that people understand the true history of what happened around the Nakba. They have a Nakba map showing the hundreds of Palestinian villages that were emptied and erased. One of our group leaders said, “Israel is not committing crimes; Israel is the crime.”

In Jaffa, we walked along the sea from one famous mosque, the Hassan Bek Mosque, to another, the Al Bahr Mosque. Between the mosques was a large park covered in grass and non-native palm trees with walking and biking paths and playgrounds. Underneath lay the remains of hundreds of homes and other buildings that were bombed and seized in 1948. The nearly 120,000 Palestinian residents of Jaffa were forced to leave and those who stayed were forced to live under military guard and work the port. There is no sign in the park recognizing the horror that is underneath it. This absence is part of the revisionist history the occupiers learn.

Today, we drove to the Negev, the desert where there are dozens of unrecognized Palestinian villages as well as “planned townships.” In the unrecognized villages, people are not allowed to own land. There are many restrictions on what materials can be used to build homes and houses can be destroyed at any moment. Although electrical infrastructure runs next to the villages, the residents do not have access to it. Access to running water is prohibitively expensive. Roads are unpaved and occupiers dump their trash on the edges of the village. Planned townships are areas where Palestinians are forced to live when their land is taken away. a type of forced urbanization. Although they have electricity and running water, more and more people are pushed to live there without the ability to build more housing, creating overcrowding and the social problems that result from it.

We ended the day in Al-Araqib, a village that has been demolished 167 times. Although the residents have deeds to the land, they are not recognized as the owners and are arrested for being on their own land. All that is left of the village is a cemetery built in 1914. The sun was setting as we arrived and hundreds of cars were leaving from a funeral. They must leave before it gets dark as there are no lights.

Although there are no more houses, the residents must stay on the land every day or they will be cut off from returning. This means they cannot work. Law enforcement comes almost daily and confiscates their belongings. The residents used to have tents, and now they only have a rug to sit on. We listened as they told about the difficulties they face every day.

The reason Al-Araqib is being destroyed is so that the Jewish National Fund can take the land to plant trees, which they call “greening the desert.” The trees they plant are not native and in addition to displacing families, they are destroying the land. The residents are ignored by human rights organizations because they are not in Gaza or the West Bank, they are on occupied Palestinian territory where non-profits fear making waves.

In just two days, we have absorbed enough pain and injustice for a lifetime.

We will continue to share what we are seeing and learning on this trip. While we are here, an important event is occurring in New York City. On Thursday, November 14, the United Nations General Assembly Second Committee will vote on a resolution brought by the Group of 77 plus China, which represents 134 countries, condemning unilateral coercive measures imposed by states like the US on other countries. We are organizing this sign-on letter, which will be delivered before the vote. A delegation will be present for the vote.

PLEASE SIGN ON AS AN INDIVIDUAL OR ORGANIZATION BY WEDNESDAY.

We also want to make you aware that as we write this, a US-supported coup is underway in Bolivia. Right-wing violence began even before the presidential election on October 20 in order to create disruption. Immediately after the vote, the Organization of American States (OAS) claimed the election was fraudulent. The Center for Economic and Policy Research countered their claims with facts. Over the ensuing weeks, right-wing violence escalated and the military defected to the coup supporters even though Morales, who won re-election, agreed to a new election. Today, he resigned.

Currently, President Morales is believed to be in a safe place and seeking asylum in Mexico, which has been offered. Bolivians have taken to the streets in massive numbers calling for his return, saying “Evo you are not alone.” Solidarity actions are occurring throughout the world.

Coup-supporters have taken to Twitter and other forms of social media, as they have in past coup attempts in other Latin American countries, to spread lies, claiming there is no coup and that the state is repressing them. We urge you not to believe them or engage them. What Bolivians need right now is our support and solidarity. We will work to keep you updated as best we can. Current hashtags on Twitter are #GolpedeEstadoBolivia and #EvoElMundoEstaContigo. Supporters of Evo are carrying the multicolored Wiphala flag of the Indigenous Peoples.

We hope that just like Venezuelans defeated the coup attempt against Hugo Chavez in 2002, Bolivians will swiftly return President Morales to power and bring stability and prosperity back to their country.