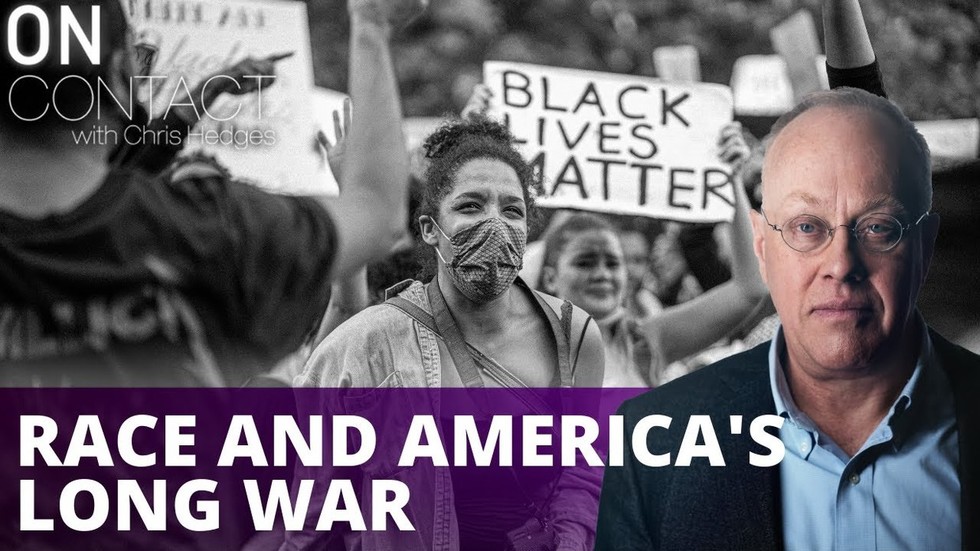 On the show, Chris Hedges discusses America’s inner and outer wars and its nexus with capitalism and empire with Professor of Social and Cultural Analysis and History at New York University Nikhil Pal Singh.

The internal violence in the United States, militarized police, and the largest prison system in the world, along with America’s endemic racism, are mirrored in the foreign wars that have been fought almost continuously by the United States since the end of the 19th century. These inner and outer wars, argues historian Nikhil Pal Singh, are intimately connected. The gunning down of unarmed black people in American cities is expressed outside our borders in the gunning down of unarmed Muslims in Iraq, Syria, Afghanistan, Yemen, Libya, and Somalia, often by militarized drones. The prison-industrial-complex at home is given form in the myriad of overseas black sites where victims, kidnapped and transported to other countries by the CIA, are held in secret, tortured, and killed.

What happens internally and what happens externally are part of the same racial ordering of capitalism and empire, an organic whole. The ‘war on drugs’ and the ‘war on terror’ are the logical conclusion of the racial wars that stretch back to the European invasion and conquest of North America. “Foreign policy and domestic politics develop in a reciprocal relationship and produce mutually reinforcing approaches to managing social conflict,” Singh argues. There is a cross-pollination between those who manage our inner and outer wars. William Casey oversaw the Phoenix Program, which “neutralized” over 26,000 suspected members of the Viet Cong through torture and assassinations, and went on to help found the Manhattan Institute that formulated the ‘broken windows’ policing strategy in poor communities, used to justify heightened police surveillance, daily harassment, brutality, over-arrests, and the dehumanization of poor people of color.

Search and stops by police at home are no different from ‘cordon and search’ operations in Iraq and Afghanistan. Night raids in Fallujah look like night raids in Oakland. The photos of brutalized prisoners at Abu Ghraib have their corollary in the photos taking by white lynch mobs in the south. Richard Zuley, accused of torturing prisoners in Guantanamo, was a member of the Chicago police unit that tortured black suspects in the Chicago police department’s own secret black site. Deputy Assistant Attorney General John Yoo in his 2003 memo seeking to justify torture turned to an 1873 case of Modoc Indian prisoners for a legal precedent. The code name for the operation to kill Osama Bin Laden was, not accidentally, Geronimo. America has from its founding made war on racialized enemies, always described as subhuman and condemned as incapable of being civilized.